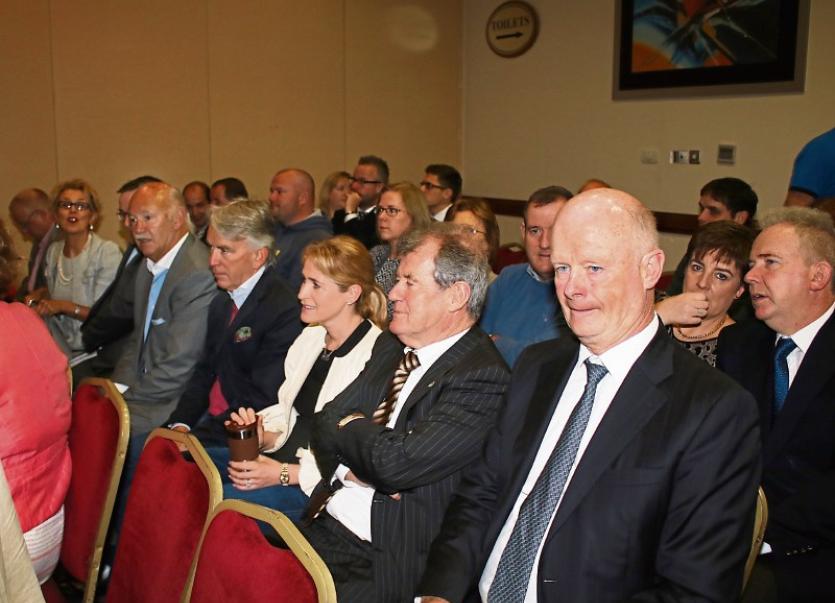 JP McManus was once again a high profile presence as the third day of the An Bord Pleanala led hearing into Irish Cement's €10m plans for Mungret got underway this Thursday in Limerick.

Sending out a clear message of concern over Irish Cement's plans to burn tyres and other waste for energy at their plant, billionaire JP McManus rallied a range of influential associates to attend the An Bord Pleanala hearing into the matter this week.

Mr McManus, who had jetted in from Geneva to hear submissions regarding the plans by Irish Cement, was seated beside the influential business people as well as his daughter Sue Ann for the opening day of the hearing.

“I'm concerned. Beginning and end,” JP McManus said as he made his way into the hotel where in the region of 100 people gathered for the oral hearing.

Politicians from all parties were also out in force and many of them took the opportunity to voice their concerns while the hearing was also attended by local business people and educationalists as well as objectors, including Limerick Against Pollution (LAP).

Attending for a third day this Thursday, Mr McManus was joined at the South Court by Deputy Willie O'Dea, Senator Kieran O'donnell, metropolitan mayor Sean Lynch and a number of local councillors as interest in the oral hearing showed no sign of letting up.

Former Munster, Ireland and Lions captain Paul O'Connell was another high-profile presence at the third day of the oral hearing.

Dressed casually in a navy jumper and a grey collared shirt, he strode purposefully into conference room two of the South Court Hotel at around 11am, and sat down next to JP McManus.

Also present in support of the group opposed to Irish Cement’s proposals to burn waste and tyres was high-profile businesswoman Helen O’Donnell, while students from Laurel Hill secondary school were also present to witness the hearing.

It comes as a scientific expert added his voice to criticisms of Irish Cement’s environmental impact statement (EIS).

Dr Gordon Reid, who has 30 years’ experience in physiological research and teaching, appeared for Limerick Against Pollution (LAP), and followed in the footsteps of one of their previous witnesses, Dr Paul Connett, in criticising the data Irish Cement has provided in regard of dioxin levels.

“There was a lack of input data made available for showing what the daily intake rates of milk, meat, vegetables were set at and what these were based on ... the lack of model input and output files and the parameters used to populate the model means that a complete review of the modelling study submitted is not possible," he told the hearing.

“It is hard to see how a proper environmental impact assessment as defined by the Directive would be possible based on this report.”

Meanwhile, Clare Keating, who was speaking for the residents association based at Sli na Manach, the nearest estate to Mungret Cement, called for the company to look at a new model of producing the material.

She said: “If they are serious and genuinely concerned about making this change to their fuel source for the betterment of the environment, why not utilise the gas pipeline adjacent to their plant? This would be an obvious soolution which it seems they have not even considered.

“Their 'solution' [to burn tyres and waste] is a short term one, as tougher environmental regulations and enforcement will increase their costs in the long term.”