Hundreds expected to march in Limerick in opposition to cement plan 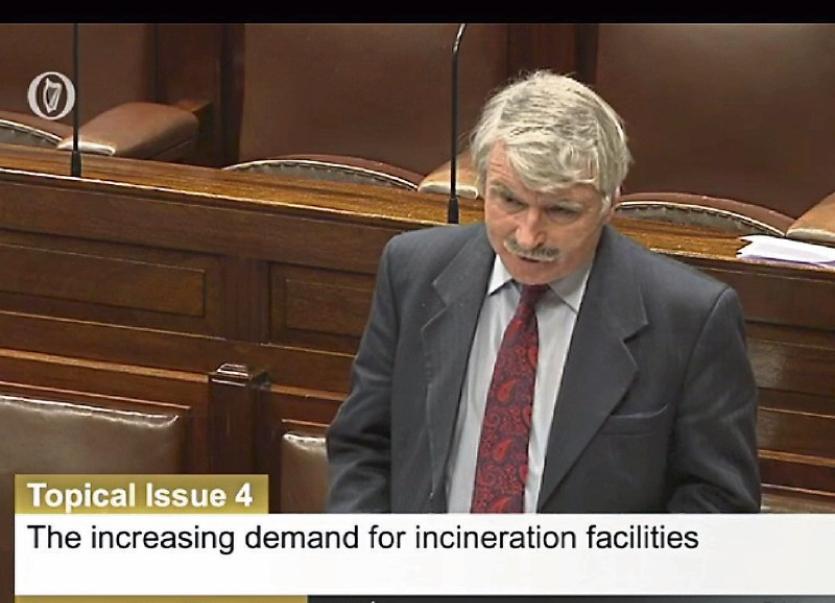 ‘Huge dangers’: Willie O’Dea speaking in the Dail this week

HUNDREDS of people are expected to descend on the city this Saturday for a major demonstration in protest at Irish Cement’s plans for its Mungret site.

Limerick Against Pollution (Lap) is organising the march – which starts from 2pm outside City Hall – in response to proposals by the firm to use solid recovered waste and used tyres to make cement, rather than petroleum coke.

Residents are concerned that burning used tyres will release a number of toxic emissions into the air including dioxins, furans and sulphur dioxide which will in turn cause a range of health problems.

However, Irish Cement has always maintained that due to the fact the burning will take place at such a high temperature, there will not be an increase in emissions into the air. In fact, the company says it is necessary for it to reduce its carbon emissions.

In the run-up to Saturday’s march, the reforms have been raised in three occasions in the Houses of the Oireachtas – by Willie O’Dea in the Dail, and twice in the Upper House by Kieran O’Donnell and Maria Byrne.

The Fianna Fail TD said the Irish Cement plans have “profound consequences for my region”.

He asked whether the Department of the Environment, the HSE, or the EPA had undertaken a public health risk assessment.

“Incineration on the scale envisaged brings huge dangers, but there appear to be no plans in place to guard against these dangers. What reassurances can the minister give us now that the burning of 90,000 tonnes of industrial waste, including tyres, solvents and plastics will not have an adverse effect on air quality to the detriment of the community,” he asked.

The minister responsible, Denis Naughten was not present.

In his place Education Minister Richard Bruton said: “The role of the minister in waste management is to provide a comprehensive legislative and policy framework through which the relevant regulatory bodies, such as local authorities and the Environmental Protection Agency, operate.”

Mr O’Dea said his response is of “cold comfort” to residents of Mungret, Raheen, Ballinacurra and Clarina “and all those other heavily populated districts which will be immediately affected if this proposal proceeds”.

Mr Naughten was present in the Seanad this Wednesday, however, responding to a question from Mr O’Donnell.

The Limerick senator has made a formal request to the EPA to install a permanent air quality monitoring station at Mungret.

“Good practice ordains that one of the sites for monitoring air quality should be at the Irish Cement site. There is a major concern among people living in the area. Many have young families. They are very reasonable people and they have concerns about the emissions from the plant,” he said.

In response, Mr Naughten said the EPA is proposing an extra monitoring site in Limerik City – but declined to reveal where.

“Obviously some of the concerns are well-founded, and I hope they would be taken into account by the local authority and the Environmental Protection Agency,” he said.

Mr Noonan declined to reveal his own personal view on the proposals, only saying: “I live in the area and I have views”.

Asked if he had made a submission to the EPA, which is deliberating on awarding Irish Cement a licence, he said this is something he never does.

“I have to maintain my neutrality as Finance Minister,” he said.

But the former Education Minister Jan O’Sullivan was one of more than 2,000 people who did make their views known.

The Labour TD said: “I’m not sure protest marches at this stage will make a difference one way or another. I can see the balance between the people who currently work there, and the people who are concerned about health. But the first concern has to be health. If there is any danger to people’s health, then that has to be the priority.”