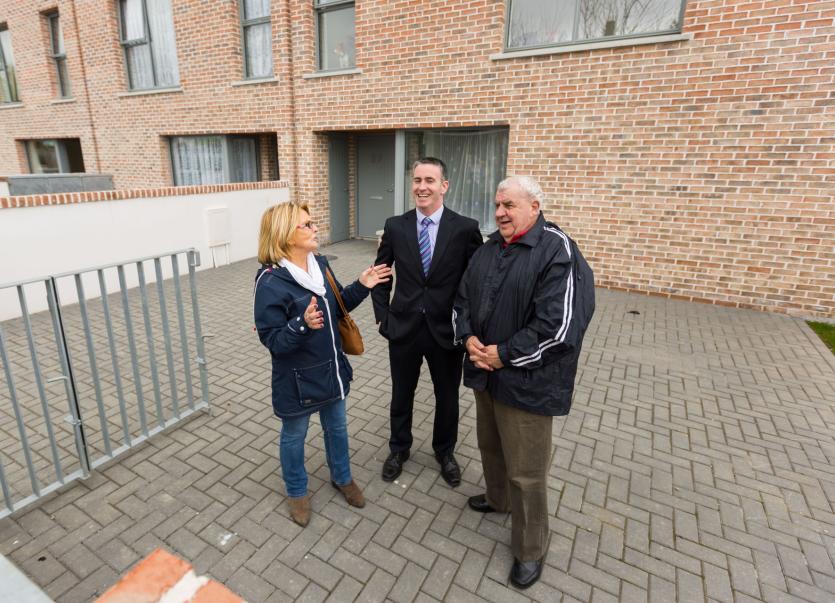 DAMIEN English has opened the first phase of a new €18.5m housing development in Southill in Limerick that will comprise of 80 homes when completed.

The Minister of State, Dept of Housing, Planning and Local Government officially launched the first phase of Churchfield Development in O’Malley Park – a new development comprising of 42 homes.

Funded under Limerick Regeneration, the €18.5m scheme when completed will consist of 80 new BER A rated energy efficient homes. Work on procuring the remaining 38 units will get underway shortly.

“This development marks another milestone on the regeneration path and follows on from the completion of 79 units last year at Lord Edward Street,” said Minister English.

“Overall 243 new units have been completed and 561 social and private houses have been refurbished under a rolling programme of thermal upgrades across the regeneration areas.

“These are making a real difference in people’s lives,” he said, adding his best wishes to the new tenants for the future and for the continued enjoyment of their new homes for many years to come.

Deputy English also paid special tribute to the residents of the regeneration areas for their co-operation, patience and understanding throughout the whole process.

19 new families have been given keys to their new homes and planted a tree at the development to mark the official opening.

The €18.5m scheme will also include significant infrastructural works involving the re-location of streets and a new drainage and services system for this part of the city.

Mayor of the City and County of Limerick Cllr Stephen Keary said it was "an important day for the new residents and indeed all of Limerick.

"I wish each and every one of the residents all the very best in their new home and hope they will create happy memories here and build a strong sense of community with their neighbours," he said.

The project, designed by ABK Architects, provides housing through a mix of one, two, three and four bed houses and apartments within the context of a new urban layout that reinforce connections with the wider city.

A central avenue connects the new development with the existing street network and has been developed adjacent to the Community Hub in Southill which has recently undergone refurbishment with the opening of a bright new Café space.

"We’re delighted the Minister visited Limerick today to open this scheme which is designed to the highest standards and integrates really well with adjacent buildings such as the Southill Area Centre," said Seamus Hanrahan of the council.

"A total of 19 homes have been already handed over to families with the remaining 23 due to be completed over the coming weeks. After that, we’ll look forward to starting phase two of the scheme, of which, significant preliminary work has already been completed," he added.

Minster English was also briefed by Limerick City and County Council officials on future developments in Limerick as part of his visit to the city.

“Delivery is happening for social housing in a real way, and today is another example of that. Across Ireland, local authorities are making real progress on their ambitious housing construction projects," he said.

“This work is accelerating and they are constantly adding to their programme to meet the housing needs in their areas,” he added.