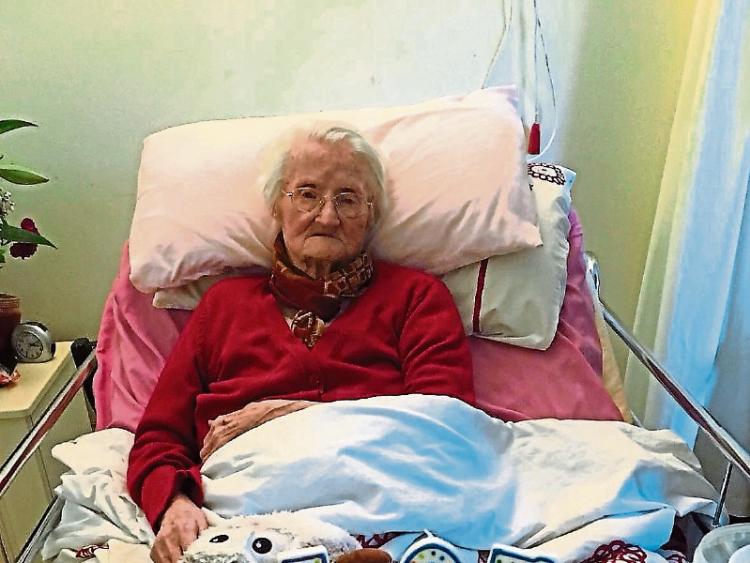 ONE of Limerick’s oldest citizens, Bridie MacNeil from Glin, has gone to her final resting place just days before she reached the grand age of 106.

Bridie died on February 8 at the Oaklands Nursing Home in Listowel which had been her home for the past number of years and was buried, following Requiem Mass, in Kilfergus Cemetery, Glin last Saturday. Born Bridget McNamara in 1912, she was the last of a family of nine to die.

Had she lived on, Bridie would have celebrated her 106th birthday this Wednesday, Valentine’s Day. But the relations and friends who now mourn Bridie, both here in Ireland and in Boston and Nova Scotia, can remember with great affection a woman who lived her life to the full and who, just a year ago, celebrated her last birthday with her favourite tipple, a drop of Baileys.

They also remember a woman who knew her own mind and who had steadfastly declined to accept the centenary bounty of €2,540 from President Michael D Higgins when she reached 100.

She felt, her niece Breda Culhane explained to the Limerick Leader, that she wasn’t entitled to it or deserved to get it, because she had lived in the US and Canada for over 70 years.

“She always described herself as an Irish-American,” Ms Culhane said, adding that she “adored her American passport and cherished receiving a letter on her birthday from the American Embassy in Dublin”.

“Even at 103 she kept saying she wanted to go back to America, but when she was there she always spoke about coming home to Ireland,” Ms  Culhane said.

Bridie grew up in Cahara, Glin and knew hardship in her young life. Her father died when she was 12 and the youngest in the family was just months old. At just 17, Bridie and her sister Ann set off in search of a better life in the USA in 1928. They headed to Boston where Bridie worked in factories and as a chaperone to wealthy families and where she met Rose Kennedy.

She was a regular visitor back home, often for long stretches.

Bridie met and married her husband Don MacNeil when she was in her 50s and moved with him to Nova Scotia, where he had a farm. Following Don’s death in 2002, Bridie returned to Glin where she stayed with, and was cared for, by  her niece Breda and her husband Jack at Cahara, next door to the house in which she had grown up.

“She was good company. She liked to go out, to entertain and she like a game of cards,” Breda recalled this week.

Some years ago, Bridie moved to the Oaklands Nursing Home in Listowel where she died last week. She was waked in Cahara and her funeral was attended by her large, extended family of nieces, nephews and their children and grandchildren, neighbours and friends.