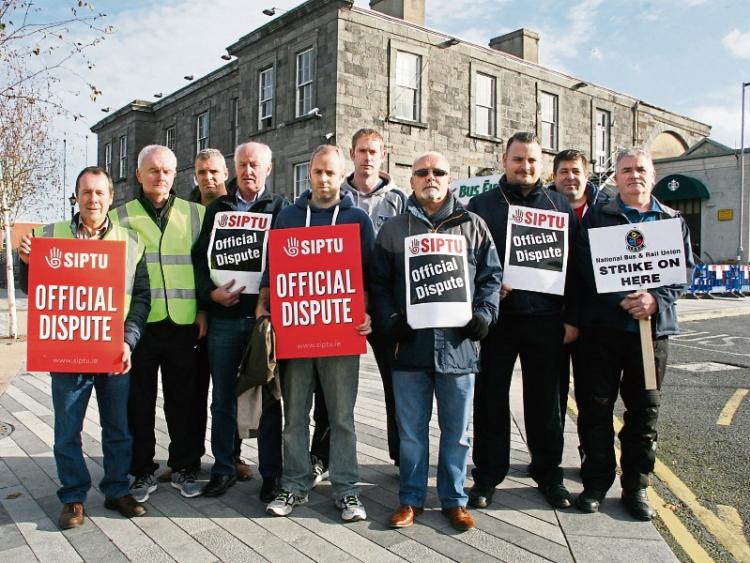 Workers are on strike for a second day this Tuesday

THERE were heavy delays on Limerick’s roads this Tuesday morning as Irish Rail workers kicked off a second day of action over pay and conditions.

For the second time in under a week, a picket has been set up at Limerick’s Colbert Station as rail services out of the city - and nationwide - ground to a halt.

With many rail passengers forced to switch to road transport as a result, there were long tailbacks at the Kilmallock roundabout stretching back to the Amber service station at 8.50 this morning.

Roadworks at the junction from Roxboro Road to Upper Carey's which reduced traffic to one lane, causing further delays.

Around 60 Iarnród Eireann workers based out of the station are taking action, after they say they have not seen their wages increased since the onset of the recession back in 2008.

This lunchtime, Manuel Cortes, the general secretary of the Transport Salaried Staff Association – one of three unions backing the action – visited city workers.

She said: “I think Shane Ross is the most invisible minister we have ever seen in terms of his engagement with transport. For a minister for transport, he is very hands off. Why did he not step in at the very begining to try and prevent this from happening? Iarnród Eireann provides a public service – it’s never going to make money – and the workers are right to strike because they have been continually carrying the flack for years.”

Fianna Fail TD Willie O’Dea added: “I visited the Irish Rail workers on the picket line in Limerick and none of them want to be on strike but feel they are forced into industrial action, as they have been treated very badly by management and haven't received any pay increase in 10 years.”

He claimed Mr Ross had failed to honour a commitment made at the time of the Bus Eireann strike earlier this year to set up a multi-agency forum which could have prevented this action taking place.

“Today’s action is yet another example of the failure of Minister Ross’ strategy for overcoming industrial issues. His policy of ignoring the problem will most certainly not deliver a solution that protects workers, the tax payer and above all, passengers,” the frontbencher concluded.

Workers are looking for a 3.75% annual increase over three years.

Irish Rail runs a number of services out of Limerick, including direct trains to Dublin, Ennis and Galway, plus indirect routes to Cork and Waterford.

The strike finishes tonight at 12 midnight.

How have you been affected by the @IrishRail #railstrike? Were you caught in traffic earlier? Let us know at @Limerick_Leader pic.twitter.com/XjmXmoAw8Y