Dead friend left on road by man with 186 previous convictions 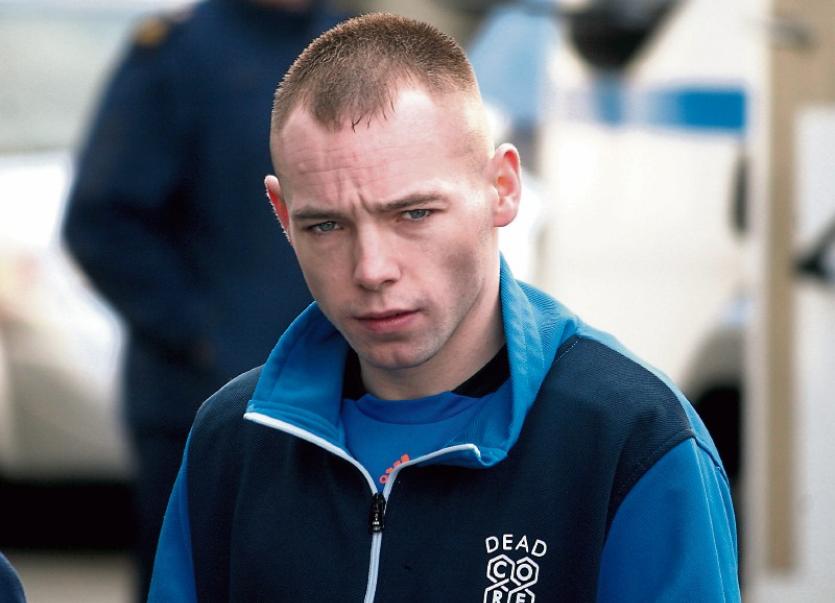 Thomas Whelan, found guilty of failing to remain at the scene

A CONVICTED criminal, who failed to remain at the scene after his friend fell out of a car and died, has been sentenced to 11 months in prison.

Thomas Whelan, aged 25, of Upper Gerald Griffin Street, Limerick city made up the name of the driver based on the alcohol beverage he consumed on the night - Captain Morgan - heard Kilmallock Court. He denied this.

The late Tony O’Brien, aged 31, was a back seat passenger in a Toyota Avensis being driven along the N69 at Bolane, Kildimo on April 26, 2014. After he hit the road he was struck by a BMW travelling towards Kerry.

Detective Garda Tom Dee, who was off duty, was driving at the time and saw the back driver side door of a Toyota opening and closing.

“Half a mile from Kildimo a person fell from the car onto the roadway. He rolled for approximately four or five yards and was hit by an oncoming car travelling from Kildimo to Askeaton. The car he fell from did not stop,” said Det Garda Dee, who stopped immediately, as did the driver of the BMW.

The detective garda rang the emergency services and started to direct traffic as it was on a bend and “quite dangerous”.

“The car that the deceased fell from arrived back and blocked traffic in both directions. A young male got out, he was the sole occupant and went to the injured party. He came back to the car. I confronted him and told him to move his car as it was going to cause another accident. He told me to ‘f*** off” and ‘that was his friend lying on the road’.

“I told him he had to move his car or there would be another accident. Again he told me to ‘f*** off’. I identified myself as a garda and directed him to move. He jumped back in the car and took off at high speed in the direction of Limerick city,” said Det Garda Dee, who identified Whelan in court as the driver.

Sabina Hegerty, solicitor for Whelan, put it to the detective that it was very dark and “very hard” to identify somebody.

Det Garda Dee said there were two lines of cars, all with their lights on.

“Mr Whelan will say he was a passenger in the vehicle and it was driven by a Johnny Morgan,” said Ms Hegerty.

“There was nobody else in the car,” said Det Garda Dee.

The investigating garda, Alan O’Donnell was also asked by the solicitor about Johnny Morgan and said Whelan’s version of events was “unbelievable”.

“We made extensive enquiries about Johnny Morgan. There was no mention of him from Mr O’Brien’s family and friends. There was no trace. This is the biggest and most thorough file in my 16 year garda career,” said Garda O’Donnell.

Mr O’Brien’s partner at the time, Samantha Fitzgerald said Whelan arrived down to her home in Listowel with another man. They had a bottle of Captain Morgan, which they drank with Mr O’Brien before the three men left, she said.

Whelan took the stand and said he drove his brother Lee Whelan to Listowel.

“We met Tony outside a chipper and went to Ms Fitzgerald’s house. We spent about an hour there. Outside the house my brother rang a friend and he was going to stay with him,” said Whelan.

“Tony brought me to meet a friend he knew called Johnny Morgan. He wanted to buy the car. I agreed on a deal if he would drive me back to my house in Limerick,” he added.

On the way home the defendant said he was in the front passenger seat and “rolling a joint”.

“I heard the back door open. I told Tony close the door. The music was loud. I looked back and Tony was gone.

“I told Johnny to turn the car around. There was loads of people out from the pub. I was concerned they would attack me.

“I saw Johnny jump into the driver seat and I got in the passenger seat. I panicked,” said Whelan.

Back in Limerick he asked to be let off for some fresh air near the South Circular Road. The car was found burnt out the next morning in a city estate.

Inspector Alan Cullen put it to Whelan that he was lying about John Morgan.

“There was never any Johnny Morgan. The only Morgan was Captain Morgan,” said Insp Cullen.

In summing up, Insp Cullen said there was “no doubt Whelan was driving the car on the night”.

Ms Hegerty said there had to be a “doubt”.

Judge Marian O’Leary found Whelan, who has 186 previous convictions, guilty. She sentenced him to six months in prison and disqualified him from driving for 10 years for no insurance. Judge O’Leary handed down a five month sentence to be served consecutively for failing to remain at the scene. Whelan was fined €300 for driving without a licence.