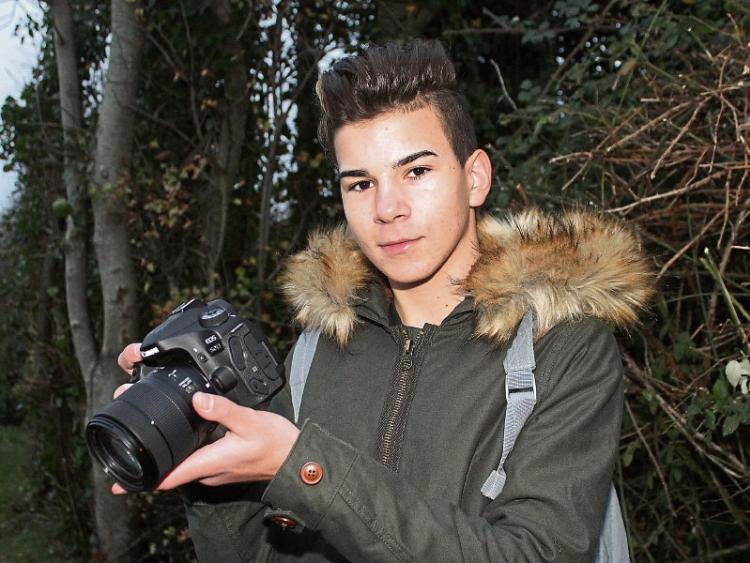 Vlad uses his Raheen home as a base to create his YouTube videos. Picture: Michael Cowhey

WE are scarcely seated when Vlad gets a tap on the shoulder. Two boys are lingering near our table, wondering if they can get a picture.

This is nothing new for the seventeen-year-old, who is regularly stopped in the street by viewers. However, his Limerick fanbase is nothing compared to the thousands worldwide who keenly watch his every move on social media.

“I feel like young people feel connected,” said Vlad, when asked to explain how his YouTube channel, VladTeeVee, has amassed a whopping one million subscribers.

“I think people watch my YouTube because they feel like they're watching a video with someone instead of just watching it alone,” he said.

Although his profile has been slowly growing locally in recent times, the teen has been gaining popularity on YouTube over the past year.

Having only started making clips reacting to other vidoes on the site in 2015, his channel has flourished.

“I think social media fame is a new thing, like I don’t even get it,” he admitted.

Vlad’s YouTube channel is still growing at an enormous speed — on November 5, it reached 1 million subscribers, and just one month later, it is almost 45,000 stronger.

“I started in July last year, and it only started blowing up six months ago,” he said.

“Last Christmas, I remember I was sitting at home and I was happy because I had 10,000 subscribers.”

In this corner of the internet, stars like Vlad occupy a space that is akin to Beatlemania.

“I thought they were all abroad at the start, but I go out now in the Crescent or town and there’ll be really young people, like 12, and they’ll be asking to come take a photo and stuff, which I think is insane,” Vlad said.

A sixth-year student at Salesian Secondary College, Pallaskenry, the teenager is “very popular among his peers” according to principal Paddy O’Neill.

“Vlad is a very mannerly, polite and unassuming young man and is handling this success with over a million followers on his YouTube channel very maturely,” said Mr O’Neill.

“He wants to complete his Leaving Cert to give him his passport to a route in education if and when he needs it. We are of course hoping he will do really well,” added the principal.

The teen admits that balancing sixth year with school is challenging, however, saying that he “rarely has any free time”. He clearly loves recording videos for YouTube, and is highly motivated by the work involved.

“I love it, I love working and I try to work as much as I can because it's what motivates me, I’m at the point where I just do what makes me happy.

“It does affect my social life though, since I think that for someone who is trying to achieve something, doing a lot of things like going out and walking around shops or nightclubs could set them back,” he said.

Does he gets chased in school by adoring fans?

“In my school it’s mainly the first years, the ones who didn’t know me before this year. They’re the ones who are like, ‘oh my God he goes to our school’. But everyone else is like ‘oh, it’s just Vlad’.”

“No, it doesn't embarrass me at all, and I honestly don't see why it would embarrass anyone, it makes me realise that that person took time out of their day to say something nice to me... I think that’s awesome,” says Vlad.

Living at home with his mother Alexandrina and father Dumitru, the YouTuber has one older sister, Oana.

He was born in 1999 in the historic region of Transylvania, Romania. A picturesque part of the world, it is well-known in popular culture as the homeplace of Bram Stoker’s Dracula. The vampire count is believed to be inspired by real Transylvanian Vlad ‘the Impaler’ III, a somewhat bloodthirsty medieval ruler.

“I have the same name as Dracula, too,” grins Vlad, who I can confirm is not at all as ferocious as his namesake.

“Romania is a really beautiful country, but the people who run it...” he trails off in disapproval.

Sure enough, Romania’s last Prime Minister Victor Ponta resigned last year amid mass protests. But our political analysis stops there, and we return to YouTube.

“I used to watch YouTube for a long time, I had loads of channels but nothing really worked out because I was really young and stuff. But I was honestly bored and I needed something to do,” said the teenager.

Looking for something to do seems to come up a lot, and Vlad thinks that Raheen badly needs somewhere for young people to hang out.

“It was fun when we were younger, we were just out playing soccer and stuff. But as we’ve gotten older there’s nothing to do, and people end up just hanging around, it’s not good,” he said.

“I wish there was somewhere to go. There’s an abandoned warehouse in the industrial estate, it should become an indoor skatepark or something where people could just hang out.”

Anyone in the public eye can be subject to a bit of hate, but he says that he experiences relatively little negativity.

“I think it’s a really small amount, compared to other people. The range of people that watch my videos aren’t the type to hate,” he said.

“It hasn't happened for someone to physically come up to me and say something to make me feel bad.

“Yes it happened at the start, when not everyone understood what it was, but now it’s all love, at least that’s what I'm aware of. But you can never know someone’s true intentions and feelings towards you as a person,” he said.

This month, the Limerick lad was featured in a Christmas song, called Christmas Without You, and appeared in the music video.

The Hello Christmas grouping included 25 online influencers from all over the world, in an attempt to hit the coveted UK Christmas number 1 spot in aid of Make A Wish UK.

“I went to Amsterdam for the song, that was the first place I’ve gotten to go to with YouTube,” he said.

Admitting that people will probably eventually tire of reaction videos in time, Vlad said that he might slightly change direction after school.

“I want to make it more interesting. I might do other kinds of videos after I’m finished school, I’ll just try to expand more,” he said.