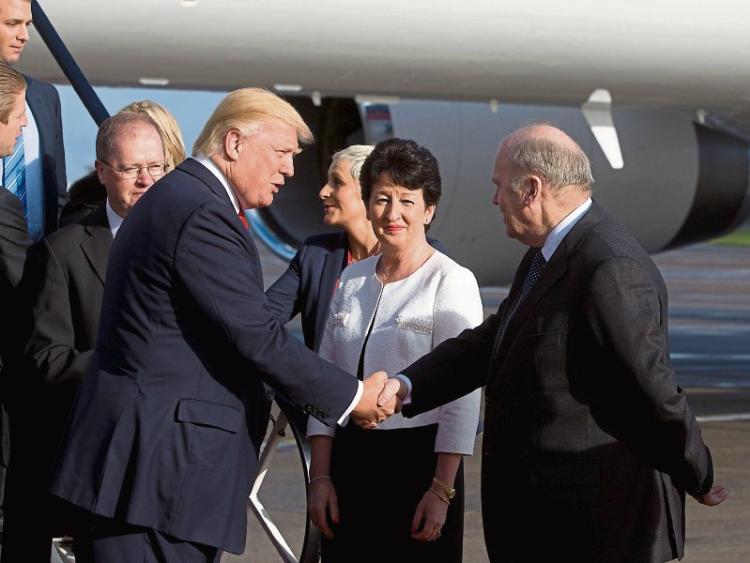 MINISTER for Finance Michael Noonan has moved to allay fears that jobs from American companies in the pipeline for Limerick could be under threat from new President elect of the United States, Donald Trump.

Speaking to the Limerick Leader this week, Minister Noonan said that his trip is going "very well", and centres on the Irish job creation prospects post-Brexit.

He said that he has not requested a meeting with Trump, and that his trip was scheduled prior to the election of the Republican candidate.

"I met the US Secretary to the Treasury on [Monday], Jack Lew, and I had a very good meeting. I had lunch then with 12 people from the business community in Washington and I'm flying out to the west coast this evening [Tuesday].

"For the next three days, I'll be meeting the people in the IT industry for discussions; most of them will have projects in Ireland - Amazon, Facebook, Intel and Apple and all the others," he said.

Asked if jobs in Limerick or across Ireland could be affected in January when the 45th President of the US takes office - with a promise to lower corporation tax by 20%, down to 15% from 35%, he said: "No, that's not being expressed here at all."

Regarding his views on the election of Trump, which has shocked the nation and the world, he said: "It's up to the Americans to decide who their president is."

"No, I haven't looked for a meeting [with Trump]. I'm dealing with the present administration. I've had no contact with him at all, and didn't look for contact with him.

"My trip wasn't related to the [US] election, it was arranged after Brexit. The trip is more of a follow-up to Brexit than anything else."

Asked if more jobs could come to Ireland post-Brexit, he said "there is no diminution in interest. There is nothing ready to announce yet for Limerick".

Also on the table during discussions, it is believed, is Ireland's handling of the Apple controversy and the ability of large American firms to avail of the 12.5% corporate tax rate here.

The US government's chief financial officer reiterated his concerns over the order by the EU for Apple to repay €13bn in back taxes – now being challenged by both the tech giant and Ireland – and what it would mean for trade relations between the EU and the US in the future.

In a statement, the US Treasury revealed that Lew criticised how the EU Commission was retroactively applying "a sweeping new state aid theory that is contrary to well-established legal principles, calls into question the tax rules of individual countries and threatens to undermine the overall business climate in Europe."

Earlier this week, the Department of Finance stressed that his week-long visit to the US was planned following the outcome of the UK referendum on EU membership, "which presents an important challenge for the Irish economy".

"Minister Noonan will use the opportunity to highlight the many attractions Ireland has as a destination for foreign direct investment and engage on topical issues," they said.

He was also due to meet officials from both the IMF and the World Bank.

Speaking in advance of the trip, Minister Noonan said: “Ireland has strong ties with the US and this is most evident in terms of inward investment from American companies.”

“I meet regularly with current and prospective investors from the US and this visit will allow me to emphasise Ireland’s attractiveness as a destination for foreign direct investment following the UK’s decision to exit the European Union.

"Companies invest in Ireland for a broad range of reasons, not least to access the world’s largest economic block, the European Union. As a common law, English speaking and business friendly jurisdiction we will continue to be an attractive destination for US companies.”

“We will continue to look outwardly and engage with investors with a view to encouraging substantive investment in Ireland which creates high-quality employment for our people,” he said.