Limerick motorcycle club members were at dying biker's side 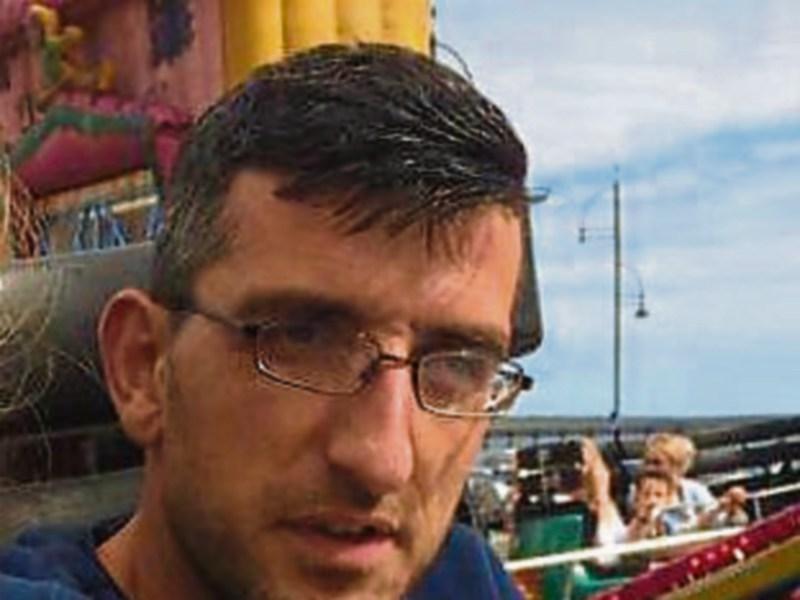 The late Scott Fitzgerald and below, the monument

MEMBERS of a County Limerick motorcycle club, who have a bond in life and in death with biker Scott Fitzgerald, have erected a monument in his memory.

Five of the Unfixables MCC Eire, based in Pallasgreen, were there with Scott during his final moments after he crashed on the road between Barna and Old Pallas.

Scott, aged 33 and whose partner is expecting their first child in December, hit a wall after the throttle cable in his bike jammed and he was thrown into a field.

Somehow he managed to phone the president of the Unfixables, Patrick Franklin, who lives close by. Patrick, known as Cookie, rushed to the scene.

"He rang me to say he was after coming off the bike on the way to the clubhouse, that he was in a field, to come down and get him. Me and the vice-president [Paul Kenny] went straight down and we were looking for debris on the road. We looked in over the ditch and we found him inside in the field then,” said Patrick.

“There were five of us there with him in the field for about half an hour but it felt like hours. We were all talking away. Scott asked me was his hair alright. We were always slagging him about his hair because he had a quiff.

“He had stopped on his way from Tipperary to get a breakfast roll and he was saying, 'Where's my breakfast roll?'. All he kept saying was, 'Cookie don't leave me'. I said, 'I'm going nowhere, I'm staying put here'."

“Scott knew his leg was damaged but he didn't know what was going on in the inside. He was sore and finding it hard to breathe. We just thought his leg was broken and a couple of other things and that he'd be alright. We didn't realise he hit a tree stump in his chest when he fell off the bike and that's what did the damage,” said Patrick.

When the ambulance arrived emergency personnel tried to stabilise Scott. They took him to the GAA field where an air ambulance was waiting. But 10 to 15 minutes later when a signal came to shut the helicopter engine off they knew Scott had lost his fight for life.

Patrick praised the emergency services for their efforts to save Scott and Garda Niall McInerney from the Bruff district.

“The guard asked us to come over to the ambulance and to say our final goodbyes. He was very helpful,” said Patrick.

In the majority of motorcycle accidents the driver dies alone or is found hours later but Scott had his friends by his side.

“That's what a lot of people in the biking community have been saying to us. If you come off the bike - that's the life we live - and you're found in a ditch but there was five of ye there with him,” said Patrick. Scott’s five friends were with him to the end.

Tragically Scott leaves behind a pregnant partner who is due to give birth next month. The Clonmel man will never be forgotten by the Unfixables who have erected a monument at the spot he crashed.

Scott was actually on his way to the clubhouse, close to where the accident happened, to help get ready for a Halloween party. He would have celebrated his 34th birthday on the following Saturday.

"Every time I look out the window, I can see where it happened. I knew him for years. He was some man on a back wheel, he was able to do everything on a back wheel of a bike that we would need two wheels for. He used to build his own bikes and everything.

“The Halloween party was cancelled as a mark of respect. We did have a lot of close friends and club members here and we left off 34 lanterns - one for each year.”

The monument is a rock found on a beach by Paul Kenny. Patrick painted it white and Mary did the artwork. It has been placed where he crashed and will be forever known as the Rock of Scott. 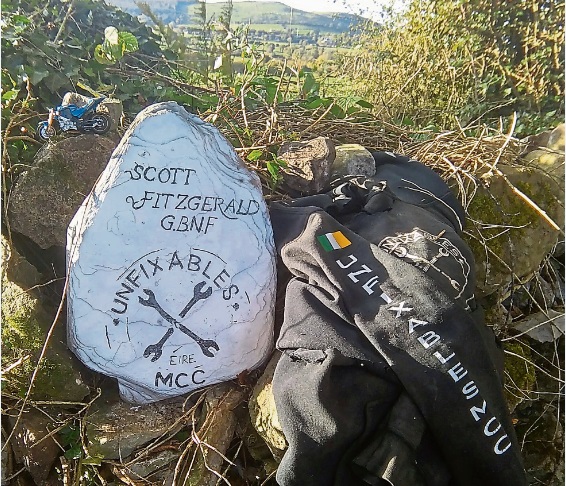