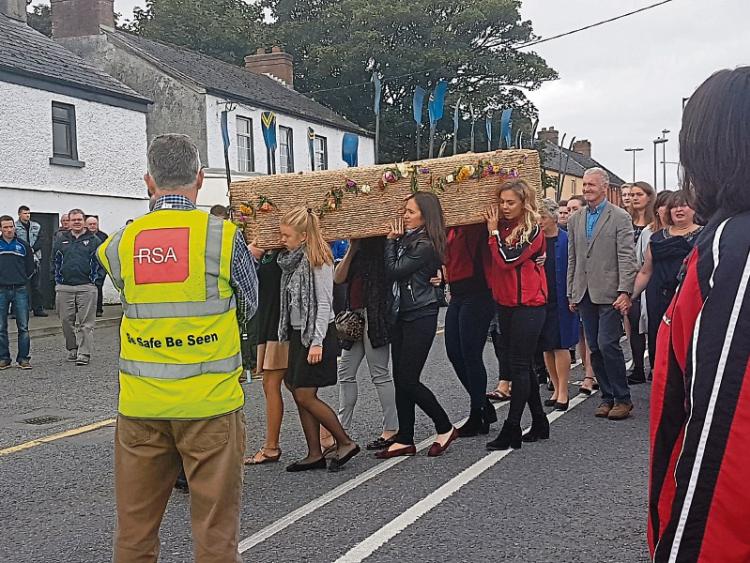 HUNDREDS of people gathered in Limerick today for the funeral of Ailish Sheehan, the rower who lost her life in Poland last week.

The 23-year-old tragically died after a freak fall in Poznań, just hours after winning a bronze medal for Great Britain at the World University Rowing Championships.

St Michael’s Rowing Club, Kildimo Pallaskenry GAA Club, and students from St Clements College were just some of those who formed a guard of honour outside the church in Kildimo, holding rowing oars high as the coffin moved past.

The mass was celebrated in St Joseph’s Church by Fr Joe Foley, who was the parish priest in Bruff when the Sheehan family lived there.

He was joined by a number of other priests from Limerick and Cork, all of whom knew the Sheehan family.

Fr Foley said that the church has hosted many sad occasions over the years, but none as sad as this one.

In his homily, he expressed remorse that “someone so young and full of vibrancy” was “taken from us”, saying that there are no clear answers to “such an incomprehensible tragedy”.

“Ailish was a joy among us — she had a vicarious spirit that drew you to her company and made you feel good on any day,” said Fr Foley.

The gifts presented during the mass included a photograph of Ailish’s family and friends, a candle to represent the light and example that Ailish was in the lives of all who knew her, and a blanket from the University of Notre Dame in Indiana, USA, where she studied.

A St Michael’s Rowing Club t-shirt was also brought forward. This was where Ailish “was introduced to what became the greatest passion of her life”, said her sister Aine.

Ailish won the 2016 University of London Female Rower of the Year award, which was also brought forward during the ceremony, as well as a piece of her artwork created while she was a student.

The Sheehan family thanked the local community and friends for sharing stories and tributes to Ailish, saying that the outpouring of support on social media “was a deep source of comfort”.

They also thanked the Kevin Bell Repatriation Trust for their help in bringing Ailish’s remains home this week.