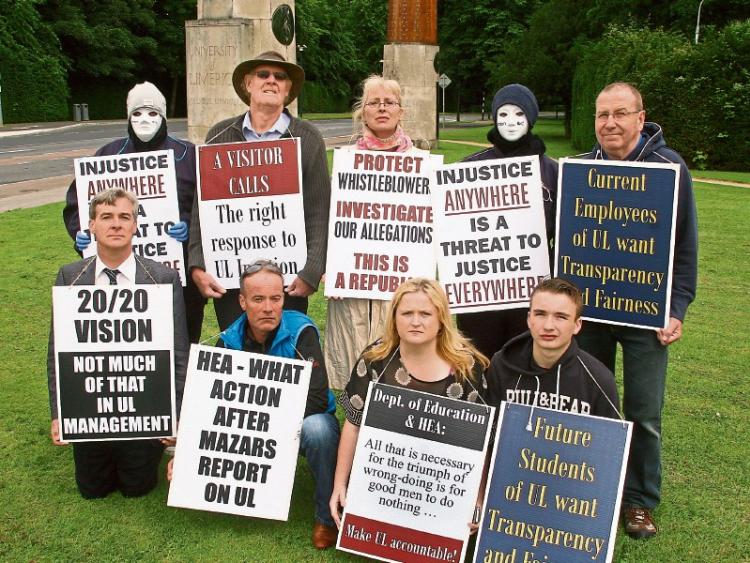 AFTER mounting a protest outside the gates of the University of Limerick, former staff now plan to bring their protest to the Dail and the offices of the Higher Education Authority in Dublin.

The group are seeking to highlight the suspension of two female staff members of UL’s finance department over a year ago, and the failure to reinstate them in their positions.

They were suspended after an internal investigation found them guilty of making a “malicious” complaint against a colleague, a charge they have robustly denied. The Mazars report found that they were correct to query certain payments and expenses by other UL staff.

The protestors also wish to highlight the apparent inaction to date by the HEA following the publication of a report they commissioned some months ago, which highlighted up to a dozen action points to be addressed by the university.

The HEA has been in discussions with UL since the publication of that report, all responses from the parties involved have been received, but to date those responses have not been made publicly available, which the HEA outlined they would do.

Among those who took part in the peaceful protest this Wednesday was Limerick woman Leona O’Callaghan, who initially brought her concerns to the Public Accounts Committee in 2012.

Ms O’Callaghan was replaced in the finance department by one of the women who is currently suspended with pay.

“It's a real pity it had to come to this,” Ms O’Callaghan told the Leader. “We avoided this action for a long time but now feel it is what is needed. It’s months since the Mazars report. We have been fobbed off too many times and now we are seeking answers.

“We will not just go away and lose interest over time. We are willing to allow ourselves open to any public investigator or visitor to comprehensively look at each of our claims and announce publicly if there are any untruths or wrong doings at our hands.

“We stand here today not against UL or against current staff and students, we stand here with them and for them. We stand here against unfair processes, we stand against the need for confidentiality agreements.

“We stand for fairness, transparency and equal treatment in all departments of UL. To the HEA and Department of Education: inaction is a choice, it’s time for the choice to be to hold UL accountable after the findings of the Mazars report,” she said.

Dr Cahill said that after the publication of the Mazars’ report, which was commissioned by the HEA, “all we hear from the HEA is that they are talking to the university, but as of yet nothing has happened.

“We feel now that we must bring this to public attention at large, and we do this reluctantly because we love the university. We have given the best service we can to the university. Nothing will remedy this now apart from an impartial visitor being appointed [by the State]. The future of the university is at stake here,” he said.

He added that those concerned by the situation of the two suspended employees have been “more than reasonable” in waiting for action to be taken.

The protesters said they felt bouyed by the support of passing motororists into UL, who constantly beeped their horns and gave them the thumbs up.

The HEA has not responded to recent queries from the Leader on how it is progressing the matter with UL.

A statement from UL said it "recognises and respects everyone’s right to protest" and has "long-established and fair processes for addressing any complaint or disciplinary matters in relation to staff, students or others".

"In principle, the University is not in a position to comment on individual cases in order to respect the privacy of the individuals concerned but if they bring matters into the public domain then the university reserves the right to state matters of fact," it said.

"Based on on-going matters in the media the University feels it must provide some clarification in relation to two members of staff who are suspended with pay pending the outcome of a disciplinary process.

"The same two members of UL staff are also the subject of disciplinary proceedings, as a result of a third external independent investigation finding that they made a malicious complaint against a colleague. This finding was upheld following an appeal to a separate external expert.

"These proceedings are being carried out in accordance with UL policies which are in line with national public sector best practice and with regard to due process that includes the right of appeal.

"The disciplinary process has been delayed as a consequence of both the Mazars review and complaints made to the Workplace Relations Commission (WRC) by the two members of staff involved. In the case of the first complaint, the WRC found in favour of the university.