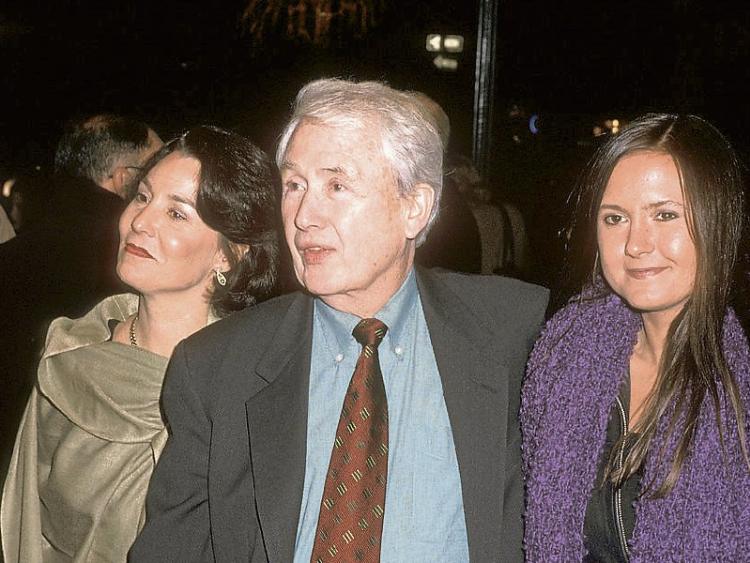 Ellen, Frank’s third wife, with him and Maggie at a New York film premiere

It doesn't feel like it's been seven years since my dad passed away. It has flown by, and it's still hard to accept that he has gone.

I felt privileged to be Frank's daughter long before he ever became famous. My mother told me that when I was a baby and when I'd cry in the middle of the night he would chase her to the crib to feed me or change my diaper. He just loved being a dad. Some parents can be very distant, but he was never that way.

Before he died, we asked him what his wishes were and whether he wanted us to take his ashes to the family graveyard in Limerick and he looked up at me with big, sad eyes and said 'That would be too much trouble'.

My daugher Chiara was the apple of his eye. When he was dying he said he was so sad that he wouldn't see her graduate, and asked where she would end up going. As an artist, I'd bring some of my paintings to his house in Connecticut as his eyesight began to fade before he passed away.

He was funny and imaginative and was always making silly jokes. I remember being embarrassed by him at times, because he'd do funny things while we'd walk down the street, and when I took formal dance classes in Brooklyn high school, he'd dance around the room with me.

Other parents were a lot more reserved and he was very non-conformist.

When I was in my early teens, going to this private school, I really wanted him to play the part and act like all the other parents. He was always the parent that was a little bit different. I'd say 'Please act normally'. I remember then he'd act overly normal in a mocking sense.

He didn't care what other people thought about him. He marched to the beat of his own drum.

I once asked him: 'When I grow up, what's the one quality I should look for in a person?' and he said kindness.

That's what I remember most about my father - his kindness, his dedication towards helping people, his friends and family and even people he did not know at all, his chivalrous nature, and his sense of humour even in the face of dark times.

There were many times when I was fortunate to observe him in the classroom [as a high school English teacher in New York] and he was very vibrant. He stood on the desk, he would dance on the desk sometimes, he would do the most outrageous things for the attention of these kids.

Some of the kids weren't very creative, others were more talented in the sciences and math, so my dad would go out of his way to spark their creativity.

He'd say everyone has something to write about. If you don't know what to write about, write about what you ate for dinner last night. So it was very apparent to me that he was gifted.

He was a great observer of people and situations because he used that in his writing. We could be on the train in New York City, and he would always be observing people, and say to me: ‘Do you see those people opposite - what's your observation?’, ‘Have they been together a long time, or do you think this is their first date from their body language?’

He loved children and babies in particular. He used to tell me never to trust people who don't like music, children or animals.

I always knew that he was there for me, even as a teenager when I became rebellious and wanted to go out into the world. I took off and travelled around and remember calling my mom and saying I needed money. She'd tell me ‘No’ and to come home.

Dad, I don't want to say that he enabled me, but he wanted me to have as many experiences as I could, make sure that I was Okay, and against my mother's approval sometimes.

He always emphasised of importance of real freedom and independence, and he never wanted me to rely on someone else.

He was very hard working to the point where it was hard to measure up in certain ways. He had high expectations for himself and others in terms of his work ethic. He was always on time, and had a very big thing about being on time. He thought anyone who arrived late was very disrespectful. He always bought me a watch and an appointment book.

He just encouraged me to find what it is that I love and follow that. He always said ‘If you do what you love, the money will follow’. I wasn't one of those people who knew what they wanted to do right off the bat. I changed careers many times, and right now I'm a stay-at-home mom,a grand-mother and mother of four, and I plan to finish my education, even at this late stage in the game.

Growing up, long before Angela's Ashes, I was aware of his writing ability, because he was always writing everywhere. When he became famous and I asked him about it, he said someone once asked Fred Astaire how was he such a great dancer and he said '12 hours of practice a day'. He always wrote. As a teacher, he was teaching and writing all day long, and correcting papers at home.

When he won the Pulitzer Prize [for Angela’s Ashes], we were all amazed and kind of incredulous. I think we always knew that he was inordinately talented, but I didn't expect it.

When Angela's Ashes came out it changed his life because it was healing for him. There were so many things that he had not reconciled in himself, or healed himself from the darkness of his past. I don't think he expected that people would have that kind of reaction to the book.

He would joke and call himself 'your handsome, charming and intelligent father', but in the same way he didn't believe that, he didn't expect the book to do so well and leap to the number one spot.

It changed his world in so many ways, and one of the things it did was to bring our family closer together. It became a way also to reconnect the dots in his past, and in that way it was really profound. My dad always referred to our family as a tribe, and that we had to stick together, and he wanted to preserve his story for future generations.

He reached the top of the mountain, but he kept going. He never stopped. He never reached a point where he said 'This is it, I'm done.'

I was proud and so happy for him. It made him feel complete - that he was able to come to America and achieve the American dream that he spoke of. It felt like he came full circle in his life. The land of opportunity was his for the taking.

← See Leader2 for more tributes ahead of Father’s Day this Sunday, June 19