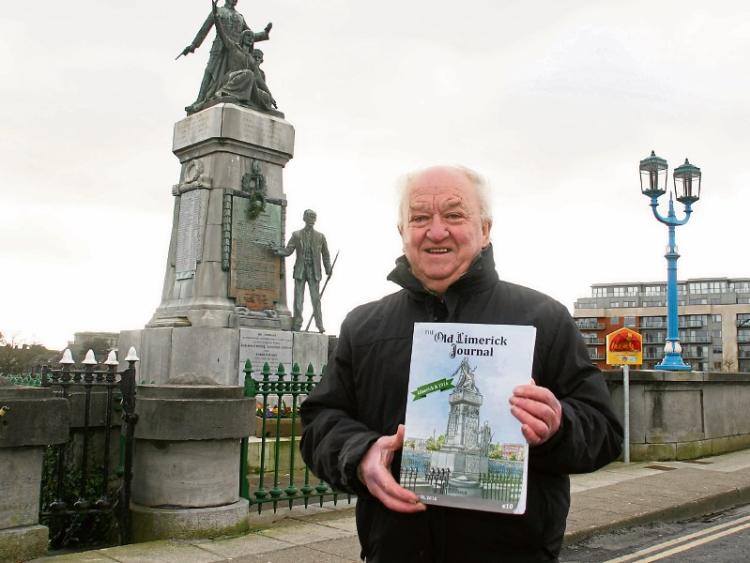 SOME artists go along way to capture the perfect painting, and for Frank Bouchier he was fortunate that his enthusiasm in completing the 1916 monument on Sarsfield Bridge, did not end up being his last work.

“I had a very scary moments alright, you could say I was an impediment to traffic” said the popular Council official, who has received rave reviews for his finished work.

To get the perfect painting Frank, from Ashbourne Avenue, South Circular Road worked early in the mornings and on Sundays from the middle of the road on the bridge and literally risked life and limb to complete his work, as traffic avoided him. He spent hour after hour, first working with pencil before completing it as a water colour.

“There is an awful lot of detail in the painting. It took my four months to complete. I wanted to get it right. One of the strange things about it is, and few people would have noticed  is that the railings in front of it, are black at one side and green on the other,” he added.

An architectural technician by profession, he has over the years built up a reputation as one of Ireland’s top artists when it comes to fine detail, and his paintings of the old Lyric Cinema, the Belltable and other city landmarks, have earned him the reputation of a man, who seeks perfection.

“I was absolutely delighted when the editor of The Old Limerick Journal, Tom Donovan, asked me if he could use the painting of the cover of their latest issue,” which is a special on the centenary of the 1916 rising in Limerick and their 50th edition and is out now.

Frank, who gives art classes in his spare time in Limerick and Dublin, is also very well known in sporting circles having helped form Ashling Annacotty.

The monument was erected in 1930, and includes Fenian Tom Clarke as a young man armed with a pistol and a crouching boy and local woman Kathleen Daly, who was married to Clarke.

It was erected by voluntary public subscriptions in memory of the Limerick men and their comrades who died during the Rising.