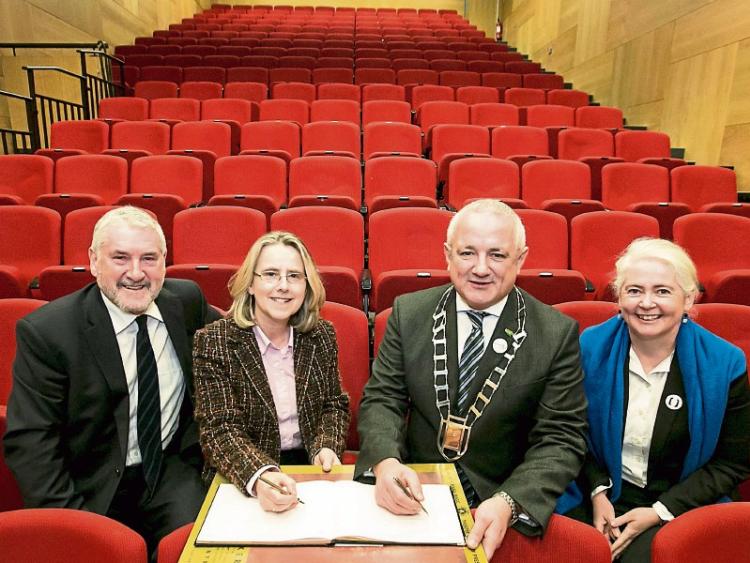 THE job of programme manager for the Belltable has been advertised, with the successful candidate expected to “bring a new dynamic energy to the building”.

The once troubled arts centre is now officially under the control of the Lime Tree Theatre team and a “dynamic, experienced and highly motivated individual” is being sought to programme, manage and direct the work at the Belltable.

Contracts were signed in November between Limerick City and County Council and the Lime Tree to secure the long term future of the theatre and return the name Belltable to use after a period of liquidation and upheaval.

Lime Tree boss Louise Donlon, who was instrumental to keeping the Belltable open on a project basis in the last two years, and board member Brendan Lane signed a five year lease and service level agreement with Metro Mayor Jerry O’Dea and arts officer Sheila Deegan.

Funding to programme the venue – via the Lime Tree – was secured from the Arts Council in recent weeks, to the tune of €126,250, while the local authority has also purchased the building and neighbouring Credit Union to reposition the Belltable as being “at the centre of arts development and practice in the city,” according to Ms Deegan.

Ms Donlon said the job of programme director offered “a great opportunity for somebody to join the Lime Tree Theatre team at a very exciting time and it will bring a new dynamic energy to the building”.

“It is worth remembering that while the arts sector is small in the city, this is made possible by the investment the Limerick City and County Council is making in the arts,” she noted.

The ‘new’ Belltable is expected to “harness the creativity of the next generation of artists while also re-engaging with the local community” As such, the “development of appropriate programming across all stakeholder groups and audiences will contribute to building organic demand for activity and capitalise on the cultural impact of 2014” – according to the job application.

Candidates are expected to have a thorough knowledge of the performing arts in Ireland and a minimum of three years’ experience in a similar role, while a five year fixed term – renewable – contract is on offer. Deadline for applications is February 11.