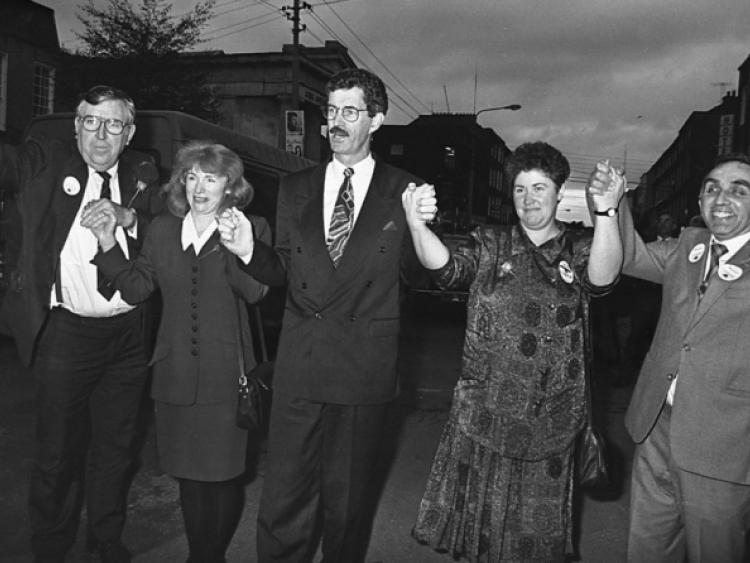 THE JIM Kemmy papers reveal the phenomenal wealth of work by the late Limerick deputy and mayor, but what is most striking in the archives was his graciousness when the thrust of political life did not turn in his favour.

THE JIM Kemmy papers reveal the phenomenal wealth of work by the late Limerick deputy and mayor, but what is most striking in the archives was his graciousness when the thrust of political life did not turn in his favour.

Thousands of documents from his 30-year long political career have now been archived at the University of Limerick, many of which are under embargo until 2034, and in some cases until 2104.

However, his letters from 1993 reveal his obvious disappointment that he was not chosen by the then Labour Party leader Dick Spring to occupy one of 11 ministerial appointments.

While he was flooded with letters of sympathy from constituents in Limerick and beyond who believed he was robbed of a key portfolio, he said he “philosophical” about whatever forces were at work.

“I am 30 years in politics and I am well used to the hard knocks in political life,” he wrote to one Limerick school principal.

“In my case, there is little point in crying over spilt milk and I have wasted little time in licking my wounds. I am back to my normal routine again, and at least I will have more time now for the editing of the Old Limerick Journal.”

However, the slight twist of the knife was reserved for letters to Mr Spring in January of that year.

“The process of the formation of this Government, amongst other things, served to further my political education. I learnt a good deal from the artistry in which my name was dangled before the media prior to the formation of the Government. Clearly, the skills of P.J. Mara are still alive and well and living in Leinster House. Good luck to you and your Labour colleagues in Government – you will most certainly need it.”

Mr Spring replied thanking him for his “positive response and understanding”, saying: “You will appreciate that many friendships and loyalties were temporarily disturbed in the context of the appointments.”

While he was battling with bone marrow cancer in St James’ Hospital in Dublin, he again wrote to Spring, this time sympathising with him on the death on his mother. He sent that letter on September 12 - less than two weeks before he passed away.

“Little did I know when you called to see me here in St James hospital and I asked you about your late mother’s health that her sad death would have taken place less than a week afterwards ... I very much regret that because of my illness, it will not be possible for me to leave St James Hospital.”

A month before his death he also wrote to the Pike Inn on Mulgrave Street, thanking them for the books they had sent up to him.

“Your kindness at this time has meant a great deal and has acted as a fine tonic for me on my road to recovery. I am working hard to fight off this illness and will do all I can to win this battle.”

His determination to defeat his illness was also highlighted in letters to the Angela’s Ashes author Frank McCourt. In a letter to the Pultizer Prize-winning writer in New York, he wrote on September 2, 1997: “Thank you for your concern for my health. I am still in St James Hospital, Dublin, and after one of two rocky patches I believe that I am on the road to recovery.”

He highlighted the launch of the Limerick Compendium, which he had edited, in Jury’s hotel on November 3, signing off “Keep up the pressure!” Sadly, after being diagnosed in June of that year, he passed away on September 25, aged 61, and next Wednesday will mark the 16th anniversary of his passing.

Indeed, a sizeable quantity of Kemmy’s correspondence concerned his sympathetically written letters to local residents on the death of a husband, wife, son or daughter. He wrote to a woman on Keane Street in 1992 expressing sympathy on the death of her husband, and his apologies for not attending the funeral due to unique circumstances.

“Unfortunately,” he wrote, “some unknown person put out a rumour about me on that day, stating that I had suffered a severe heart attack and that I had been taken to the intensive care unit in the Regional hospital. The telephone in my office hardly stopped ringing all day” and in the midst of all the confusion to his secretary forgot to pass on the message.

While he was inundated with requests from people across the country, not everyone had kind words for him - especially after he brought down the Government after he voted against John Bruton’s Budget putting VAT on clothing and footwear, including children’s shoes, at the end of January 1982.

“I hope you are happy that you succeeded in putting out of office the one Government which was strongly committed to improving the financial position of this country,” wrote a man from Harold’s Cross.

A man from Cork lambasted him on the “irresponsible way” in which he acted, and being “responsible for the downfall of the 22nd Dail”.

A man from Killarney countered: “You are the only TD with guts. You stated the truth. If others had your guts we would have a different country.”

Kemmy received all manner of appeals for help, from a republican prisoner on his 45th day in solitary confinement in HMP Full Sutton in England during the IRA ceasefire in 1995, to a woman in Roscommon who complained that the plug had been pulled on building Castlerea prison. “What are you doing up there, feathering your nest?” After his reply, she wrote back thanking him for his letter, but summed up its contents as a “waste of a postage stamp”.

A man from Clondalkin who wrote to him in 1993, and believed he should have received the social welfare portfolio, said: “Where does the poor man come in? With families of ten and more and none of them working ... and we have people in Government putting their daughters’ sisters and cousins in jobs. What chance has the ordinary man?”

If one thing is transparent from the archives, it is that Kemmy’s life’s work was dedicated to fighting for the ordinary man.