Lifesavers by the Shannon patrol the riverbanks 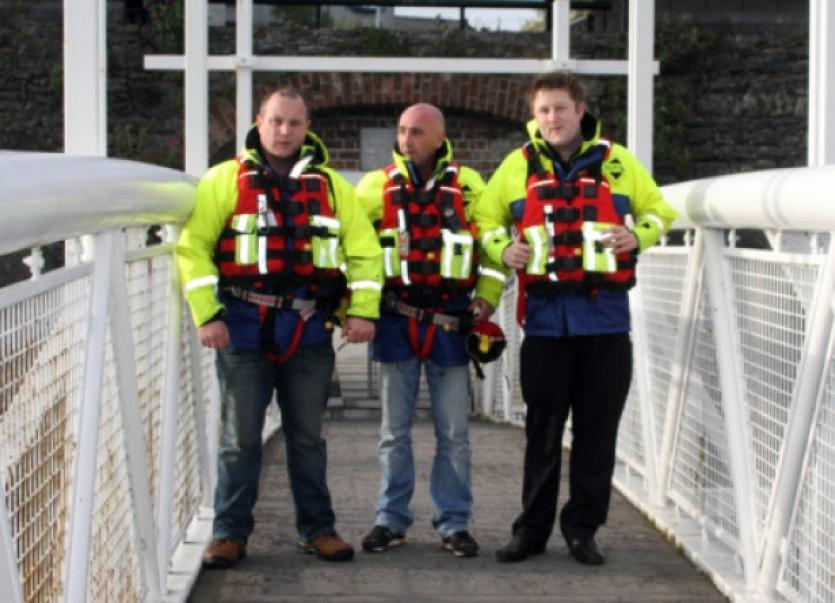 With Limerick having the highest rate of suicide nationally, Limerick Leader reporter Nick Rabbitts went on patrol with a group aiming to halt riverside tragedy.

With Limerick having the highest rate of suicide nationally, Limerick Leader reporter Nick Rabbitts went on patrol with a group aiming to halt riverside tragedy.

THE lives of scores of Limerick people have been saved over the last eight months by a voluntary group which patrols the side of the River Shannon.

Corbett Suicide Prevention Patrol (CSPP) meet at least three times a week in the Potato Market, and patrols the riverside in a bid to prevent people take their own lives by jumping into the Shannon.

There are many reasons why people may be suicidal - from the breakdown of relationships to bereavements, financial stress, exam pressures, or mental illness.

Exam stress â€“ with the Leaving Certificate in full swing â€“ has meant CSPP has increased its patrols.

The Limerick Leader joined a patrol of the river, and among other things witnessed members talking to a distressed youngster who had just had an argument with his girlfriend.

The group approached him and despite initially resisting help, he agreed to be brought back to friends.

Later that night, we came across a man in his 40s, who was bleeding profusely on Sarsfield Bridge.

Taking up the story, Paul Hogan tells me how the man had consumed 47 tablets, had broken up from his wife, and had no job.

â€œHe had cut himself with a surgical blade. Anyone passing would have just thought he was a drunk lying down: he would have been dead within half an hour,â€ he says.

The group administered first aid, and awaited the arrival of the emergency services.

During another patrol, a 17-year-old lad was in tears: coming from a broken home, and having split up with his girlfriend, he felt he had nothing to live for - until two CSPP volunteers spoke with him.

It is incidents like these which really throw into focus the crucial work done by CSPP in preventing tragedy.

The group began life in November as Corbett Search and Response, named after Trevor Corbett, who initiated the scheme, but tragically died last year.

Up to 12 people meet in a small hut in the Potato Market and patrol the river bank between 8pm and midnight on a weeknight, and midnight and 4am on weekends.

On top of this, patrols take place around Christmas and New Years, and Valentineâ€™s Day - the times when so many people feel lonely.

Once we are kitted out, and have our telephones set to 999, we head out beside Sarsfield House for the first loop of the river.

This takes in Arthurâ€™s Quay, Sarsfield Bridge, where our group of five splits in half, with one going back towards King Johnâ€™s Castle, and the other heading towards the Clarion Hotel.

Noticeable in our luminous jackets, life jackets and cargo pants, we are approached by several people, thanking CSPP for the work they do.

Some people are curious to learn more, and a reasonably quiet balmy early evening allows my two companions, dog-runner Paul and retail manager Lorraine Toumlison dutifully fill them in.

Garryowen man Paul says: â€œWe meet people from all walks of life, with different problems. Sometimes it is a relationship break-up, or job loss, or just coming under the pressures of life.â€

He points out a number of â€˜hot-spotsâ€™ where people are known to jump, including under Sarsfield Bridge on Howleyâ€™s Quay.

â€œThey have come down from town, they head around the corner, and are heading straight for the river. Lucky for us, them and their families, we would be on the bridge - and we would roar at them to take them out of the moment,â€ Paul explains.

â€œThe river is beautiful: it gives life to the city - but it also takes life from the city,â€ he adds.

When CSPP approach someone looking to jump, they would first engage in conversation with them, and then ask the question as to whether they are suicidal.

Travelling in twos or threes, another member of the group will telephone a member of the emergency services, while waiting for them to arrive.

Team members have met as many as four people contemplating suicide on some nights, and have even had to physically restrain people from jumping.

On occasion, the group have had to use a 25-metre rope included in their armoury to rescue people from the river - although this role is usually passed on to the Limerick Marine Search and Rescue.

Twelve people jumped into the water in Limerick over the 2011 Christmas holiday. But thanks to the patrols, only one person did so during the last festive season.

It is impossible to categorise a profile of who might attempt to take their own life, Paul says.

â€œBut I think we would see men more so than women. Men will not speak to their family: they will go to the back of the cave if there is a problem. When we see them out, they might not have spoken to anyone all week,â€ he said.

Lorraine says people often do not think through the action of jumping into the river: â€œWe find river suicides are more impulsive: people say they are going in, and this is it. Other suicide attempts are more calculated and premeditatedâ€.

Paul stressed CSPP would never enter the river - at best, they would stand by the side and throw a rope.

He explained: â€œWe consider ourselves to be the eyes of the river. God forbid if we see someone in the river, we are straight onto Marine Search and Rescue and the fire brigade.â€

A new initiative the group has started is a telephone service, whereby people concerned about a friend or relative can send a picture to a designated phone number - 0852120987 - and the patrol will be â€œextra vigilantâ€ in looking out.

This was brought in, Lorraine says, following an incident on St Stephenâ€™s Day last.

â€œA woman pulled up in her car and was frantic. She had a big argument with her son, and he said he was planning to go to the river and throw himself in. So she came to us, and was trying to describe him. But she was so nervous, and emotionally charged, it was difficult,â€ she recalled.

CSPP provided cover along the river at the recent Darkness into Light walk, organised by suicide prevention charity Pieta House.

More than 6,000 people donned yellow, and took part in the walk around Limerick.

Lorraine described it as â€œamazing, but also very sadâ€. â€œYou saw people running with tears on their faces,â€ she said.

She recalled speaking to one youngster, who had let off a paper lantern in the hope it would fly into the night sky. Unfortunately it didnâ€™t, instead falling to the river.

He said, poignantly: â€œAh well, that is where all my buddies have gone.â€