Plans for funeral of Limerick's Dolores O'Riordan 'not yet finalised' 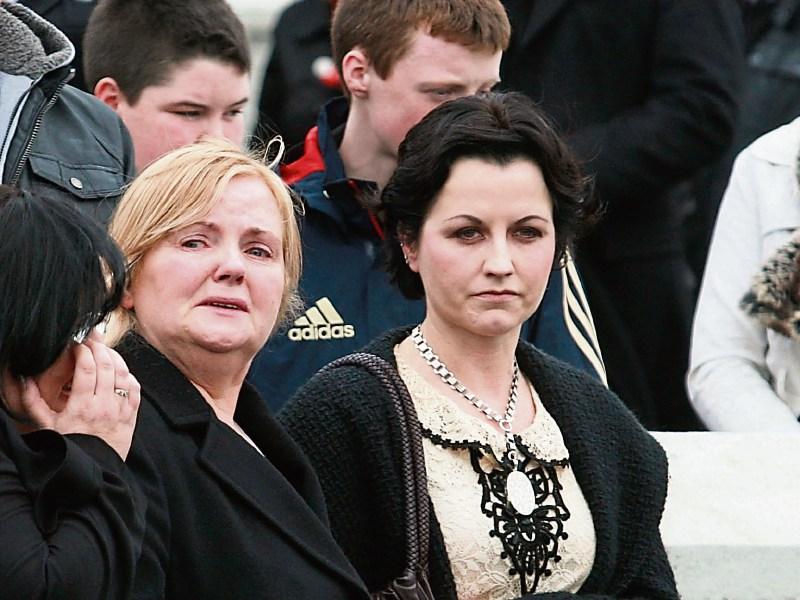 Dolores O'Riordan with her mother Eileen at her father's funeral in 2011 Picture: Press 22

THE LIMERICK priest based in the home parish of the late Dolores O’Riordan has said that funeral plans ‘have not as yet been finalised’.

In a statement issued this Tuesday via the Catholic Communications Office, Fr James Walton, priest in Dolores' home parish of Ballybricken, said that “details concerning the Funeral Mass for the late Dolores O’Riordan RIP have not as yet been finalised.

“When information on the funeral liturgy becomes available, it will be circulated to media by the Catholic Communications Office,” the statement adds.

It is expected that her funeral will take place in Limerick, however.

Speaking to the Limerick Leader on Monday following the 46-year-old’s sudden death in a London hotel, Fr Walton said he wished to “extend my deepest sympathies to the family”.

Police in London have confirmed that the Limerick rock star’s sudden death at the Hilton Hotel on Park Lane on Monday is not being treated as suspicious.

The Metropolitan Police said after a preliminary investigation that her death was not being treated as suspicious and the case will be handed over to the coroner's office.

A book of condolence was opened in her native Limerick this Tuesday morning, while a massive outpouring of grief and tributes have followed her death.

Her bandmates have said that they are “devastated on the passing of our friend Dolores.

“She was an extraordinary talent and we feel very privileged to have been part of her life from 1989 when we started the Cranberries. The world has lost a true artist today," they said.

Meanwhile, a close friend of Dolores' has said he received a call from the Limerick musician on Sunday night and that she was "full of life, joking and excited".

Record label boss Dan Waite of Eleven Seven Music said in a statement: "The news that my friend Dolores has passed deeply shocked me. I worked with the Cranberries at Universal Records and have kept in touch ever since.

"Dolores left me a voice message just after midnight last night stating how much she loved Bad Wolves' version of Zombie. She was looking forward to seeing me in the studio and recording vocals.

"She sounded full of life, was joking and excited to see me and my wife this week. The news of her passing is devastating and my thoughts are with Don her ex-husband, her children and her mother."