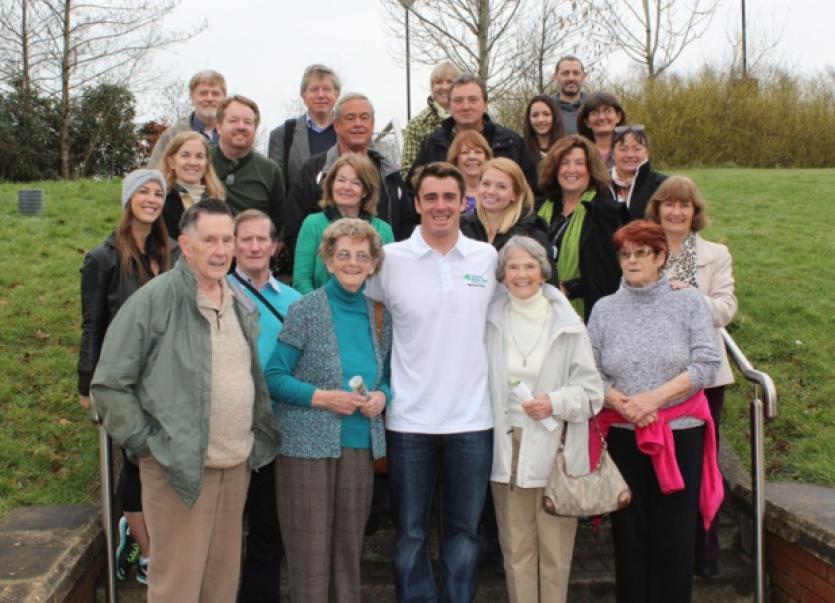 THE RAWSON family, who left Limerick over 50 years ago to start a new life in California after winning a TV show competition, made a rare return to cheer on their own star of the Irish water polo team and to celebrate St Patrick’s Day “at home”.

THE RAWSON family, who left Limerick over 50 years ago to start a new life in California after winning a TV show competition, made a rare return to cheer on their own star of the Irish water polo team and to celebrate St Patrick’s Day “at home”.

Back in 1958 the family were selected by host Bill Leyden and the producers of the hit US TV show It Could Be You, to start a new life in America and to join husband Gerard who had emigrated there.

Marie picked up her airline tickets on Monday December 8, 1958 – and the Leader story from that day can be read on page 2. She was reunited with her husband Gerard on the live TV broadcast just three days later on Thursday December 11.

The Rawsons, formerly of 12 Colbert Avenue, Janesboro, were believed to be the first Limerick family to fly over the North Pole on the 6,000 mile reunion journey. Flying from Shannon to London then onto Copenhagen, Greenland, Winnipeg and finally to Los Angeles and the Hollywood TV studios.

Marie Rawson, who was born a Cusack and is a first cousin to the late fishmonger Rene – lived at her aunt’s Catherine Street shop The Cloverdale until she married Gerard. Then they moved to his family home at 48 St Joseph’s Street. When Marie was pregnant with the couple’s eldest daughter Brigid they made the switch out to Janesboro.

Gerard, who had emigrated in 1957, was enticed to the show’s TV studios under the pretence that he was to make a recording that would be sent to his family in Ireland. Instead, he was shocked to see his wife and six children walk onto the set. Their reunion turned out to be one of the show,s most dramatic and touching scenes, according to the TV reviews at the time.

Marie and Gerard received a boost to help the family settle down and begin their new life. They were given five crisp one hundred dollar bills – equivalent to over $4,000 today – and the children received a room full of toys from the shows producers.

Sadly Gerard passed away a number of years ago. Marie doesn’t stop smiling and she greeted this reporter as Gaeilge. She still has a local accent after almost 60 years away. “My accent is like myself - hard to kill.” she said, winking through a smile.

Marie was one of a family of six who were no strangers to adversity. In 1931, at two years of age, her mother died and her father was working in England. She and her three sisters were sent to the Sisters of Mercy orphanage at Mount St Vincent on O’Connell Avenue while her two brothers were sent to the newly opened St Joseph’s Industrial School in Glin, which had moved from Sexton Street in 1928.

Noreen Cawley is Marie’s older sister and at 90 years of age is sharp-witted and sprightly. She first left Limerick in 1941 and worked in England as a mechanic repairing and servicing aircraft for the war effort: “My job was getting those planes back in shape again after they had been through the bombings.”

She met her husband Charles Cawley – a US Army Medic – during the war. According to Marie it was “very important” that he was of Irish descent. Noreen and Charles were married in England and following the war US troops were returned to their home soil. Noreen had to wait almost a year to be reunited with her husband. In 1946 she was booked on the Queen Mary as a ‘war bride’ and followed Charles to Santa Clara in California.

Marie and Noreen both expressed disappointment over recent controversies surrounding the Sisters of Mercy and they described their time at Mount St Vincent. Marie said: “I have to give credit to the nuns. My experience was very very good. I feel they sacrificed their lives for us children that had no one.” Noreen added: “Living with the Sisters was marvellous, they raised a lot of children, those nuns.”

Marie and 22 members of the extended family of Rawsons, Cawleys and Simpkins travelled from California and the UK to Limerick to cheer on her grandson - Irish water polo player Russell Simpkins – in last weekend’s EU Nations Cup held at the University Sports Arena.

“It’s the most special thing to have all the family here – it was an excuse for a lot of them who hadn’t been here in many years to come back, and some family had never been. Some people I’m meeting for the first time,” said Russell, speaking just after a nail-biting end-to-end victorious game against No 1 seeds Switzerland, while earning his 13th Irish cap.

“Yeah that was a really nice win. When I can I’ll head on the trips with the family. I went with them yesterday and saw my great great grandfather’s grave – it’s weird to think that I did come from here. It’s very special.”

Twenty-eight-year-old Russell is a professional water polo player. As a youth his promising talents were spotted by UCLA - University of California Los Angeles - and he was awarded a scholarship to the prestigious college. His skills, coupled with his determined attitude to training and playing, was acknowledged further and he was made captain.

After college he was snapped up by the Australian professional outfit Newcastle’s Hunter Hurricanes. The next season saw him transfer to Italian side Pallanauto Bergamo. In 2009 he put his credentials in an email to the Irish team coach and earned his first cap in the Tri-Nations tourney between Ireland, Scotland and Wales.

“I’m fortunate,” he smiles, “I always wanted to play water polo. I have actually achieved a lot of my goals It was a lot of hard work but it feels pretty special.” he said. “We’ve Scotland next and I think that we should get the win, but we still have to play it.”

The extended Rawson family attended Limerick’s St Patrick’s Day parade and flew back to California this Wednesday. However Marie, is still miffed at the Limerick Leader for getting both herself and her husband’s name incorrect!

All these years later, it’s our great pleasure to put the record straight.