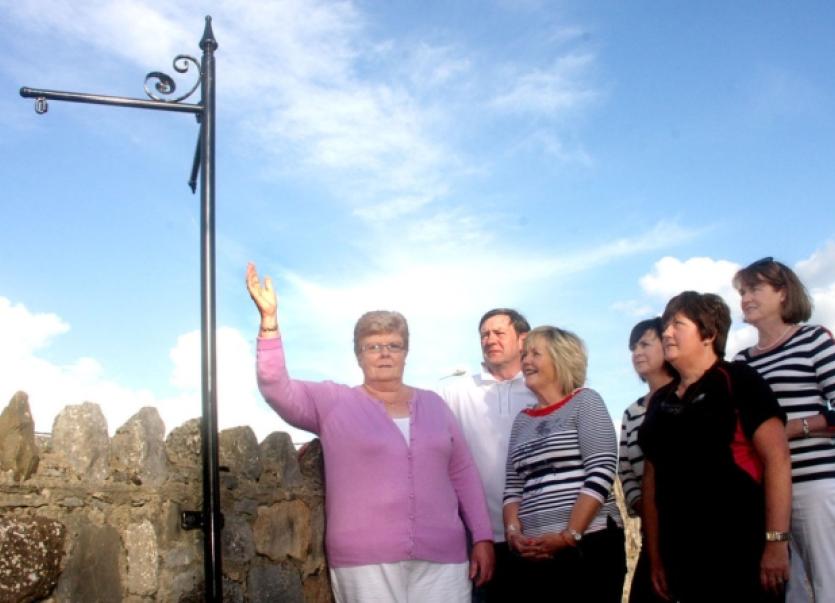 PROOF that thieves will steal anything from anywhere was shown when two hanging baskets were taken from outside a graveyard in Pallasgreen.

PROOF that thieves will steal anything from anywhere was shown when two hanging baskets were taken from outside a graveyard in Pallasgreen.

The flowers, as the photo inset shows, bring a beautiful splash of colour outside St Columba’s cemetery in Pallasgreen located on the main Limerick to Tipperary Road.

The fact that thieves would stop their vehicle, get out on a main road and go to the trouble of taking the big baskets down has caused a lot of anger locally.

It is the principal of the matter says Teresa Harding of Pallasgreen Tidy Towns. The group, who commissioned the beautiful ironwork, put up the big baskets and tend the flowers.

There are 12 poles with 12 baskets. Two were taken right beside each other.

They were taken sometime between Friday night, August 9 when they were watered and Monday, August 11.

Their proximity to where people come to visit and pay their respects to loved ones laid to rest in the cemetery has added to their annoyance.

“They are really a part of the graveyard. It is a very mean thing to do and very upsetting,” said Ms Harding.

The committee have worked hard to get even higher marks in competitions like Tidy Towns and Limerick in Bloom.

“We put up the baskets at the start of the year to get ready for the judges and bring them down when they fade later in the year. One of the ladies in our committee is very good. She grows the flowers in her own glass house, nurtures them all the way along and plants them in the baskets,” said Ms Harding.

As any gardener will tell you they had to roll up their sleeves to keep the flowers alive during the hot spell when Ireland was officially in drought.

“We took it in turns to water them. A lot of hard work went into it so it is very annoying. It is a real team effort,” said Ms Harding. To make matters worse, this isn’t the first time that they have been hit by thieves.

Local groups in Pallasgreen have rallied around to offer a donation to the Tidy Towns and increased vigilance.