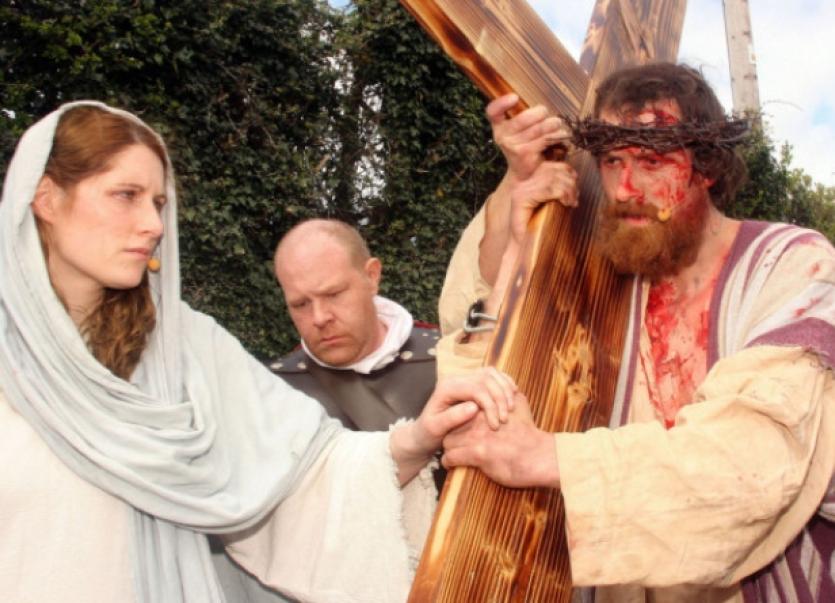 OVER 5,000 people descended on the village of Nicker over the past 24 hours to watch a “heart-breaking” portrayal of Jesus dying on the cross by Limerick man Garry Fraher.

OVER 5,000 people descended on the village of Nicker over the past 24 hours to watch a “heart-breaking” portrayal of Jesus dying on the cross by Limerick man Garry Fraher.

Speaking to the Leader just moments after the final crucifixion scene of The Passion 2014, father-of-four- Garry admitted that he struggled to stay on his feet for the duration of the performance which began at 8pm on Thursday and came to a close at lunchtime today, Good Friday.

“I found it very hard, I won’t lie there is no point sugar coating it,” said the Pallasgreen man who hails from just 500 yards down the road from where the graphic re-enactment took place.

“Physically and mentally – the level of concentration involved, it was hard,” he said.

Such was the intensity of the portrayal, that at times Garry felt physically ill.

“My legs were weak. I was straining to get up. I thought I was going to keel over.”

With temperatures reaching up to 17 degrees on what was the warmest day so far this year, Garry found it difficult to climatise following last night’s biting cold.

“I think it was the combination of the cold last night and being up against the rock face this morning and the heat hitting you. It was weird.”

He said he felt close to fainting on several occasions.

“I got a lot of bumps and bruises. I got whipped, but we knew that was never going to do damage the way it was done. I’ve never fainted before but I thought I was going to many times today. The whole thing was just such a physical marathon. It was a strange but cool experience. I’m happy it’s over now.”

His wife, Dara, said it was “heart-breaking” to watch her husband endure such physical pain for role.

“I am just in awe of him. He was just amazing,” she smiled.

“For an amateur, he went above and beyond. Everyone is in shock. He is running on adrenalin at the moment. A hot bath and a long sleep is what he needs.”

The thousands who flocked to the picturesque east Limerick village for the large-scale production - which featured a range of harrowing scenes including the flogging of Jesus and a crown of thorns placed upon his head - ranged in age from three months to 89 years. Many were moved to tears.

Christopher Marrey from Nicker and his partner Celia Stokes, also from Nicker, were so captivated by the scene unfolding before their eyes they stayed in the grounds of their local church until well into the small hours of Good Friday morning. Only for a back complaint, Christopher would have stayed all night.

“It was tremendous,” he enthused. “We were just talking to Garry there and the intensity in his eyes, even when he wasn’t speaking – you were just drawn in. Even at three o’clock this morning, it was the same. We stayed here until ten past three. I have a bad back so I had to go away but we came back up this morning and we have been here since. It has been absolutely brilliant for the community.”