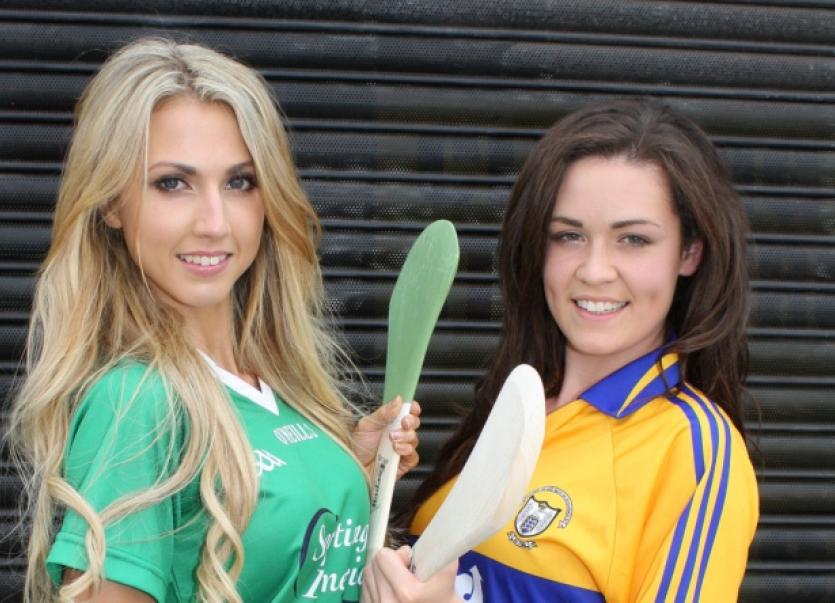 The models who represent their counties with pride aren’t only posing with the hurleys, they know how to strike and hook on the GAA pitch too.

Rachael Birdthistle played with Ahane while Lauren Guilfoyle, from Feakle lines out with her club.

The 21-year-old from Lisnagry played underage camogie before taking up athletics and becoming a champion sprinter, while Lauren plays anywhere in the forwards and has a proud sporting pedigree.

Her dad, Tommy Guilfoyle, captained the Clare senior hurlers in 1992 and her older brother Gary has starred for the county at minor, under 21 and currently at intermediate level.

Lauren, who confesses to being “GAA crazy”, can’t wait for Sunday. “The whole family is going up. It’s brilliant at the moment with all the colour and flags. There is a great buzz around Clare!” she smiled.

Lauren is studying physiotherapy in UL so when she returns to college and back living in Limerick city in September she hopes her county will be the ones still standing.

But Rachael is hoping that she will be the one celebrating on Sunday night, and hopefully at her Ardnacrusha’s boyfriend expense!

“Jeff Nugent hurls with Parteen and is going up to Dublin with his club. I am working that day but I will be following it and hope Limerick win,” smiles Rachael, who is a fitness instructor in Energize, the health club at the Strand Hotel.

As the photo shows, the girls are proudly wearing their jerseys and so are many, many more fans.

Demand for Limerick jerseys has been so high that for a short time Limerick Sport Store even sold-out of certain jersey sizes.

Manager of the William Street shop, Christy Williams, had already put in an extra order after the hurlers beat Tipperary in the first round of the championship.

But he had to go back to his suppliers again for extra stock due to the huge demand. Everything is back on the racks now and sales of polo-shirts, jerseys, flags, T-shirts, pink jerseys are flying.

“Limerick fans are unbelievable. Croke Park is going to be a sea of green on Sunday.

“I think we will outnumber the Clare fans two to one. It’s back to the vibe of 2007 again.

“We feel this is going to be a great year,” said Christy.