Parish of Kilmallock behind hurlers as final looms 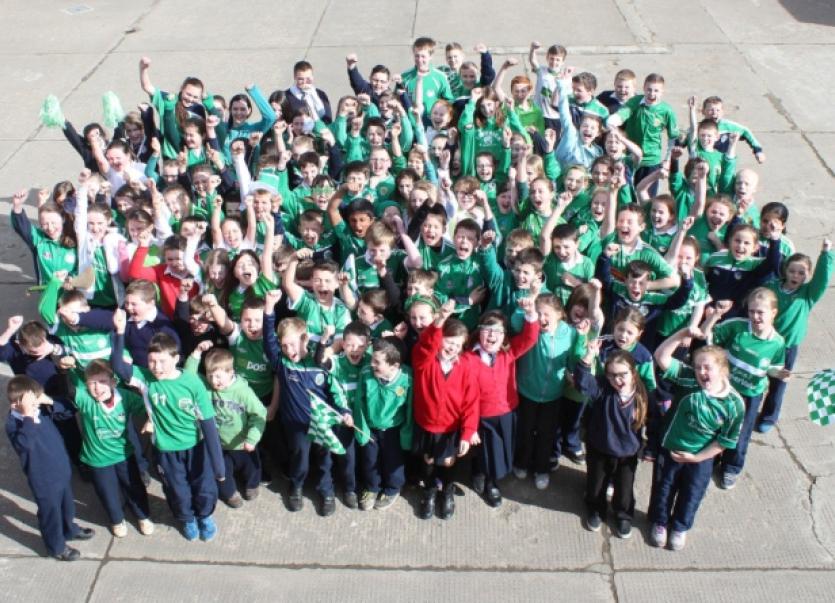 THE PHOTOGRAPH above shows the incredible support amongst the youngsters of Kilmallock National School for their GAA heroes.

THE PHOTOGRAPH above shows the incredible support amongst the youngsters of Kilmallock National School for their GAA heroes.

Michael O’Connor, principal, says there is a tremendous sense of anticipation in the town and school ahead of the All-Ireland Club Final on St Patrick’s Day.

“Everyone is eagerly awaiting the clash between Kilmallock and Ballyhale Shamrocks. We have three Kilmallock flags flying proudly outside the school and have recently produced a CD of Up the Balbec which was written by Maurice Nelligan and sung by the children in the school,” said Mr O’Connor.

He says win, lose or draw in Croke Park the lads have given everyone a fantastic 12 months of thrills and excitement.

“We are very proud of them,” he said.

Sixth class pupil, TJ Hanley can’t wait for the throw in. His dad, Brendan, played centre-forward for Kilmallock when they reached the All-Ireland final in 1993.

TJ, aged 12, is also a star forward and is certainly one for the future.

He is related to players Eoin Ryan, Gavin O’Mahony, Robbie Hanly and Barry Hennessy. But when it comes to choosing his favourite player he plumps for Bryan O’Sullivan.

“He is a brilliant passer and can score a point from anywhere on the pitch,” said TJ, who clearly knows his stuff.

He will be joining many of his friends in Dublin as he is heading to Croke Park with mum and dad, Brendan and Valerie and sister Sarah.

When asked if Mr O’Connor has said anything about no homework if Kilmallock win, he replies with a smile: “Not yet!”

The match will be over by 3.30pm, presuming there isn’t extra-time, but whatever happens Kilmallock’s great season will last for years.

Kevin Roche, player and secretary of Kilmallock GAA Bord na nOg, says the 2015 season is only going for a few weeks but they have already seen increased interest.

“We would hope that numbers would increase in 2015 and we will recruit more at under 10s and under 8s,” said Kevin.

An under 12 team will play their Ballyhale Shamrocks counterparts at half-time, a day they will never forget.

It doesn’t do any harm that the children are seeing their idols in and around the club and they are always happy to help out.

“A lot of the players would be involved with coaching in the underage setup. A good few help out with the under 21, minor team and under 16 as well,” he says.

Kevin reflects on the success of the early nineties and what it meant for the club.

“We had a great run in the early 2000s and that obviously turned into senior county success then in 2010, 2012, 20114. We would like to think the next generation would take inspiration from the current team,” said Kevin. He says there is a huge buzz in the parish.

“The town is green and white. There are flags everywhere, bunting is up, there is even a green and white car. We hope that it will breed success with the underage again,” said Kevin.

The man at the wheel of the aforementioned colourful vehicle is none other than Mike Houlihan.

“We were talking in the bar and we came up with the idea. It is 22 years since the last one. If we are there next year it is an added bonus but we might not be there for another 20 years so we said we would so something a little special,” said Mike.

Slogans include Come on the Balbec, Kilmallock GAA, Mike Houlihan’s Bar and a nod to Bellview garage who expertly painted it.

The van is a 1995 registration but Mike says she is “running like a dream.

“I’m being saluted by people everywhere. I was just going down O’Connell Street. The amount of people looking at it is unreal,” said Mike. Let’s hope he will be beeping the horn on Tuesday night!