Spotlight: Rooted to the Earth and wired to the moon - a profile of Will Fogarty and Tonya Clifford 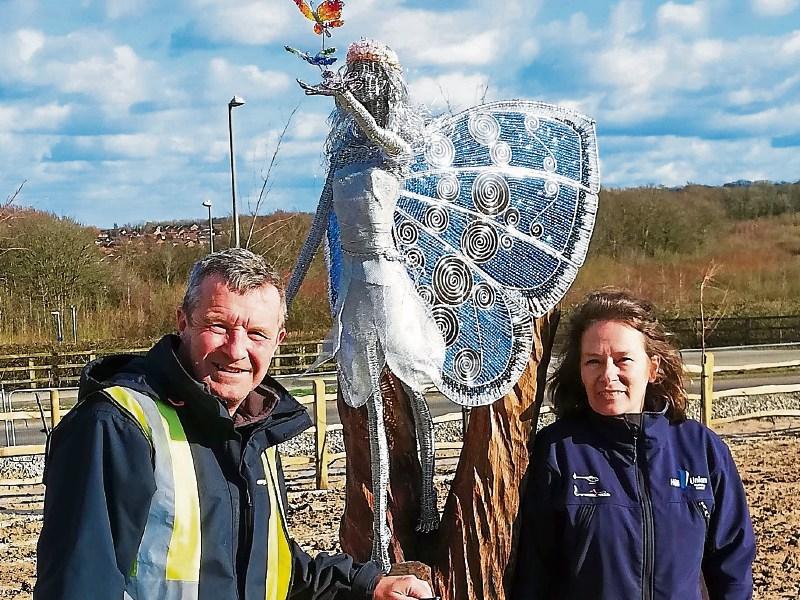 Fairy in Tree: Artistic couple Will Fogarty and Tonya Clifford on a piece they worked on together

Recently I told someone I was going to visit a couple in Hospital. “Oh, what’s wrong with them?” he asked. My mistake! I’m sure the inhabitants of Hospital have similar stories to tell and they have undoubtedly heard all the jokes before.

I explained that I was visiting Will Fogarty and Tonya Clifford who live in the village of Hospital in Co. Limerick, where for the past several years, they have been living the artistic dream.

Apparently the village acquired its name from the crusading Knights Hospitaller who built the archaeologically significant Hospital Church there before 1215.

This church has the remains of three tombs, dating from the 13th and 14th centuries. An alternative explanation, from the biography of Sir Valentine Browne, Surveyor General of Ireland (who was awarded lands in the area by Queen Elizabeth I of England), is that the village anciently formed part of the parish of Aney, and derived its name from a hospital for Knights Templar, founded in 1226 by Geoffry de Marisco, then Lord Justice of Ireland. As you enter Hospital there is, appropriately, a Will Fogarty sculpture of a Knight to greet you!

Will Fogarty is a self-taught chainsaw sculptor. He is a former builder/engineer but now has an artistic business called ‘Fear na Coillte’ (Man of the Woods) as a sculptor of fallen or felled trees.

Sometimes the trunks of these trees remain in situ and he carves them into the most amazing pieces. He works on sections of tree trunks, or large boughs at his workshop beside his home in the foothills of the Ballyhoura Mountains. These are then placed in various locations, not only in Limerick city and county but throughout the country. Other works are carved in situ, on commission. One such work of art is situated in St Mary’s Cathedral in Limerick city – a statue of King Donal Mor. Not all of the carvings in The People’s Park are Fogarty’s but some are. Making such artworks has been Will’s livelihood for the past seven years.

Fogarty was born in London in 1960 to Irish parents who had traditional occupational roles – his father was a builder and his mother was a nurse. In the 1970s they moved back to the family home in county Limerick where he and Tonya now live and work.

Will’s work is mostly commissions for parks, public spaces and people’s gardens. “I first picked up a chainsaw in 2013 – it was an old Homelite belonging to my father and lesson number one was taking it apart and getting it running again…twelve chainsaws later, I think I might have an obsession” says Will.

The last seven years have been an amazing journey for him as he has worked all over Ireland on public and private commissions. “I have met some wonderful people and made many great friends” says will.

He now spends about half of his time creating large sculptures for towns, parks schools, etc. The other half is spent carving smaller commissioned pieces in or for people’s gardens or homes. Fogarty also gives demonstrations throughout the summer months, notably at the annual Ploughing Championship. Lockdown has hampered this aspect of his work as during the summer months he would usually go at weekends to various shows to exhibit and sell his work and on the day he would also carve a few pieces for the show raffle.

I asked Will how he got into this and he explained, “I was always comfortable working with wood, from a young age I worked with my father, hanging doors…” His first piece was a commission from a playground company who had seen some of his work and asked if he would do a Viking for the playground in St Anne’s Park, Raheeney, Dublin. The site is not far from where the battle of Clontarf took place. At the time Fogarty was quite new to this kind of work. “It was a big job to take on” he says. The piece is about 8 feet tall. He recalls that it was a beautiful piece of the American redwood, sequoia.

This is also the wood used in the sculpture of the knight that welcomes you to Hospital. Will had always wanted to do something for the town and a few local groups got together and bought him this chunk of timber and he carved it. Interestingly this was the wood used in the construction of buildings in the American frontier. It is fire-resistant as it has fire-retardant properties.

Will’s partner, Tonya Clifford, is also a sculptor. She works with aluminium wire and crystal beads to create astonishing works of art. Tonya’s business project is branded ‘Wired to the Moon’ – what a great name! Tonya and Will met in 2008. Tonya got into making bespoke sculptures “by chance”, she says, four years ago. Like her partner, Tonya also had a background in a family-run building business, where she worked in sales and design. That business made and fitted marble and granite fireplaces, kitchen worktops, flooring etc. Tonya would go on-site to measure and design and liaise with clients. The high end of that company’s work was fitting hotels and office blocks.

The economic crisis impacted that business and led to closure. Eventually Tonya decided to start her own creative project. Initially she started making dolls from wool and fabric but then she began to make fairies suitable for outside – gardens. She uses non-ferrous material (aluminium wire) and crystal beads which means they will not rust or decay. She became known for these sculptures and also started to make angels or anything else that might be commissioned. Tonya’s sculptures are usually about 2.5 feet tall and they take several weeks to make.

“Lockdown has actually helped my business” says Tonya. She explains, “During the pandemic restrictions people spent more time at home and in their gardens. Money that might normally be spent on socialising or holidays was invested in gardens where people were spending more time.” Many people who could not visit family members on special occasions (such as significant birthdays and anniversaries) commissioned Tonya’s work.

“Lockdown restrictions meant that families can’t come home from abroad so they club together to buy a special gift and that’s where many of my commissions come from” Tonya explains. Another reason for commissions is, sadly, memorials to deceased children.

Each sculpture is one-of-a-kind. All of her pieces are made to commission. She has mostly done fairies to date, “but I am also happy to do any other creature you would like and will supply ideas before I start to help you bring your idea to life” she says. Both Tonya and Will have good social media profiles.

Tonya made a fabulous sculpture of a huge butterfly (1.1 metre wing-span) for a pub in Basingstoke called Holly Blue (Holly Blue is a butterfly). A company in England contacted Tonya before Christmas 2019 to say they were opening a pub in Basingstoke. They wanted the branding design to hang on an elevated wrought-iron frame outside the pub. A typical big English sign outside a pub except in this case it is not so ‘typical’. The work was commissioned and was made on sight at her workshop in Hospital. The set of wings required 8,000 beads! Each wing took forty hours work and they were made in 4 sections and joined. The pub-owners sent the huge frames so that Tonya could work into them. The wings were welded onto a steel bar that holds them in place.

Recently their work has started to converge with both wood and wire featuring in some installations and we look forward to seeing more of their work enhancing public and private spaces in Limerick and beyond.