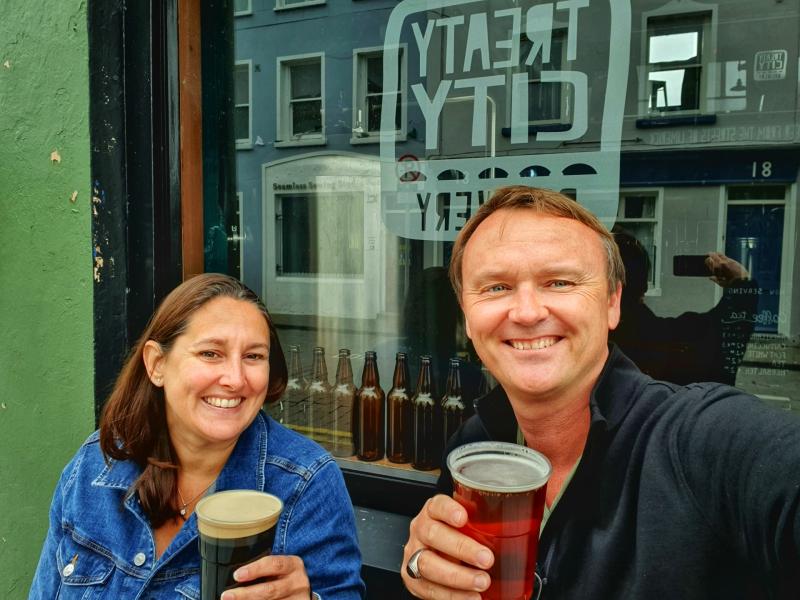 TWO popular food and travel enthusiasts have published a list of the best pubs in Limerick.

One well-know city establishment received a noteworthy hat-tip as the perfect model of how pubs in Ireland should be run.

New Jersey born Eric and Amber Hoffman have been frequenting the Limerick pub-scene since their first trip to the Emerald-Isle together in 1999.

Leaving their corporate jobs in the United States nine years ago, they decided to travel the world together in search of the best food and drink across the globe, documenting their adventures on their blog.

The couple are now living indefinitely on the North Circular Road in Limerick, having returned to the county where Eric’s mother, Mary Long of Janesboro, grew up before crossing the Atlantic in 1953.

He said: “I remember our first trip to Ireland, when our uncle bought us All-Ireland hurling semi-final tickets to Croke Park. There were no helmets then. All we could think at the time was ‘is everyone here nuts?’”

Eric and Amber's love for local Limerick people and experiences led to the initial best pub in Limerick list in 2015, and later in 2017.

This year, the compilation is seen as a living and breathing document to be updated, detailing the best pubs that the pair enjoy visiting in their spare time and where they have become close friends with the owners.

“Last time it was tongue and cheek. This time it was done as a thank you to pub owners in Limerick for what they have endured. To watch your friends for 18 months, face the carrot being pulled in front of them, was really hard. Our business suffered, just like them, as nobody was searching for travel online,” conceded Eric.

“Despite Ireland’s reputation for drink, one thing we realized during lockdown is that the enthusiasm to return to pubs, is not about the drink itself, but about having good craic and a laugh with friends.”

“All the pubs here have that, and so far, we have received great feedback on our list. Limerick people are very honest, like those from New Jersey back home, where they will tell you exactly where you stand.”

Eric, who’s Tweet’s reached an more than 85,000 people, believes that pubs like Mother Mac’s are the way forward and a business model he would like to see other Limerick establishments follow.

“They have no TV and have really embraced supporting local, such as craft brewers and whiskey makers. They have a great relationship with Treaty City Brewery. I would also like to see more micro-breweries like Crew. They took a gamble coming from Belfast and setting up here, but they absolutely nailed it.”

James and Mike of Mother Mac’s welcomed the praise and insisted that a vibrant city centre pub scene is vital to retain and grow a strong tourism market.

Reflecting on the feel of the Upper Denmark Street Public House, they said: “The pub is more about the personal connections, conversations and interactions. Eric’s Positive feedback is fantastic for us and helps motivate our staff to keep doing the fantastic job they do every day.”

Dara of Fennessy's Pub also added: "It’s great to be able to welcome our friends and customers back, some of whom have been coming in for decades for the pints, the craic and the banter."