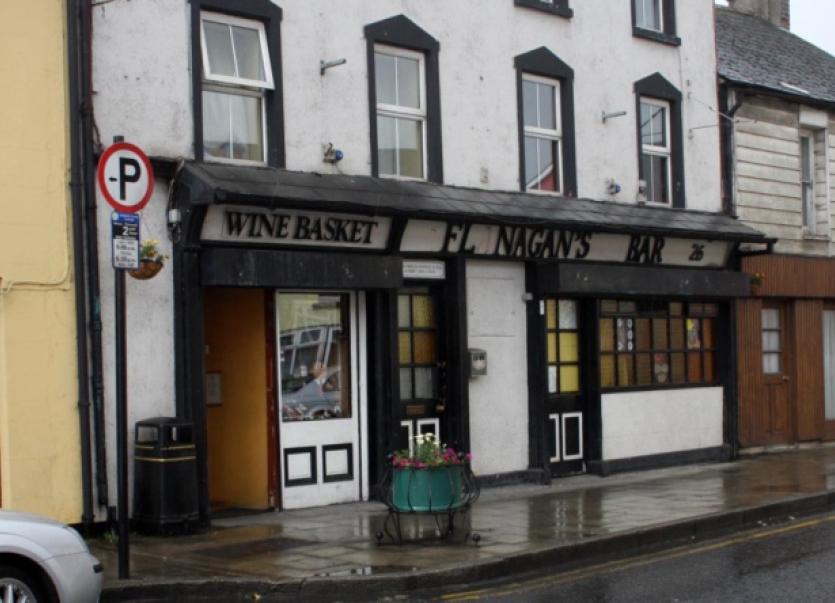 ONE OF THE oldest bars in Kilmallock has been forced to cease trading by the Revenue Commissioners.

ONE OF THE oldest bars in Kilmallock has been forced to cease trading by the Revenue Commissioners.

For the best part of a century a public house has stood on the site of Flanagan’s Bar on Sarsfield Street. Customs and excise officials called to the premises on Thursday evening and removed the stock in relation to tax issues.

Sheila McHugh, proprietor, confirmed the news after the Leader was contacted to express sadness at the closure of the popular pub.

“On behalf of myself and the family, thanks very much to everybody for their support throughout the years,” said Mrs McHugh, who is married to Greg. They have four children – Kelly, Bill, Rachel and Colette.

It has been a family-run business since May 1963, when the pub was bought by Sheila’s father, the late Bill Flanagan. His wife Marie was instrumental in its success too.

Prior to that it was run by the McGrath family for decades.

Mrs McHugh, who has been the sole proprietor for just over 20 years, said it is a changing environment for publicans.

“I wouldn’t be pointing fingers – unfortunately with the downturn in the trade it wasn’t easy to keep things going as good as they used to be,” said Mrs McHugh.

The pub trade was a different landscape 10 years ago.

“I remember coming on duty at 9.30 on a Saturday night and the pub was already full. There was a great atmosphere and music would be going. It was happier times, everyone seemed to be working. Things have changed since then and the last five years have changed dramatically,” said Sheila.

Now on a bad Saturday night there could be less than a dozen and midweek fewer still.

“Midweek it wouldn’t be worth opening, you could close the doors for a couple of nights,” she said.

Back in her father’s time she can recall a weighing scales outside the door for people to come down and get their spuds and carrots, which they grew from seed, weighed.

“It was a bit of an all round trade back then.”

Reflecting on being forced to cease trading, Mrs McHugh said: “When it is your livelihood at the end of the day it is closure to that. It is no different than being let go from a job that you were used to doing for so long.”

The mum-of-four reiterated her thanks to her customers for all their support.

Fellow Kilmallock publican and Limerick GAA great Mike Houlihan expressed his sadness. When the former county councillor started in the trade in 1998 he said there were 14 pubs in Kilmallock. Now there are eight with a licence including Deebert House Hotel.

“Sheila had a very well run establishment. It’s a family run business and it’s very disappointing – the trend in drinking culture today has put an end to that. Sheila is a wonderful community woman involved in fundraising for the national school,” said Mr Houlihan.

He says drinking habits have changed with more and more drinking at home.

“A pub is a place to go where drink can be monitored. Elderly people in bars are not being replaced. Emigration is a big factor. You would have a lot of people in Kilmallock – the same as any other parish – that would be in their thirties now, settling down and going out socialising, who are not in the country anymore,” said Mr Houlihan.