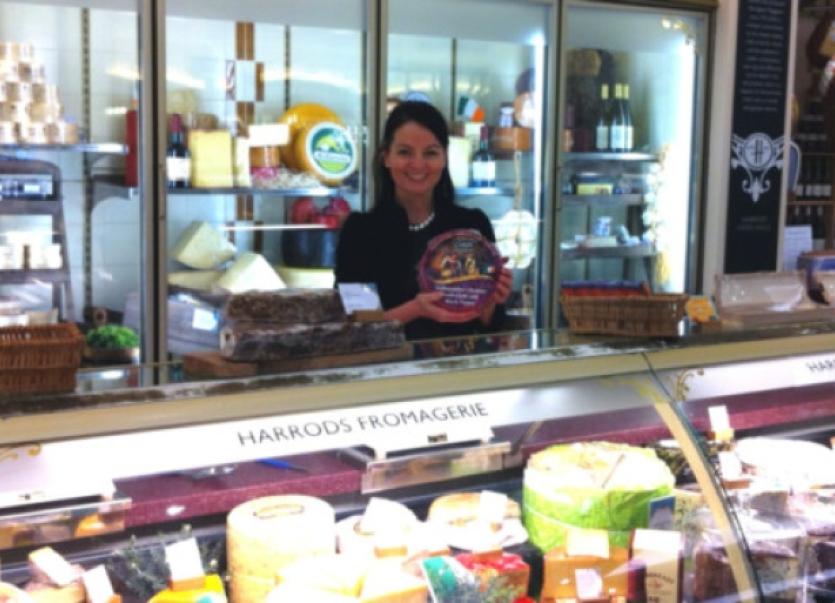 FOR NEARLY 200 years, the Harrods department store in London has been a byword for luxury products at luxury prices. But last week, the Knightsbridge store’s exclusive array of goods received an unlikely addition – cheese produced in a family-owned factory outside Newcastle West.

FOR NEARLY 200 years, the Harrods department store in London has been a byword for luxury products at luxury prices. But last week, the Knightsbridge store’s exclusive array of goods received an unlikely addition – cheese produced in a family-owned factory outside Newcastle West.

Cahill’s Cheeses have become an increasingly popular treat for shoppers across Ireland, and now the award-winning produce has gained a highly sought after spot in the Harrods fromagerie counter.

Helen Cahill, who has spent the last few months criss-crossing the globe bringing her family’s artisan cheese to new customers, said that getting their wares behind the counter in Harrods was fantastic.

“It was lovely. But it’s back to reality this week, back in the white coat and wellingtons! It was a great experience, and our cheese was very well received. We won gold at the British Cheese Awards and gold in the Blas na hEireann awards in 2012. There is certainly a sense that if you’re good enough for Harrods, you are doing something right”.

Cahill’s Cheese traces its roots back to the early 1980s when it was set up by Newcastle West dairy farmer, David Cahill, and his wife Marian.

Today, its speciality cheeses incorporate a host of unique flavours, such as porter, chilli and chives, and can be found in a number of Irish supermarkets.

In the past two years, the company’s profile overseas has continued to grow and grow. In 2011, David Cahill received the unique honour of giving the keynote lecture at the Princess Grace Irish Library in Monaco, in the company of Prince Albert.

Last year, the company exported its produce to seventeen countries worldwide, and is continuing its push to reach even more new markets.

Earlier this year, Helen travelled to America to promote their cheeses, which are now sold in the Trader Joe’s speciality grocery chain, which has outlets in California, New York, Massachusetts and a host of other states.

“It is very exciting for us when someone finds our cheese in their local cheese market or delicatessen in America and sends us a photograph. We’re very proud of our product”, Helen said.

“My brother Dan and I are constantly looking for fresh opportunities in new and existing markets.

“The reputation of Ireland’s dairy produce is growing with each year”, Helen added