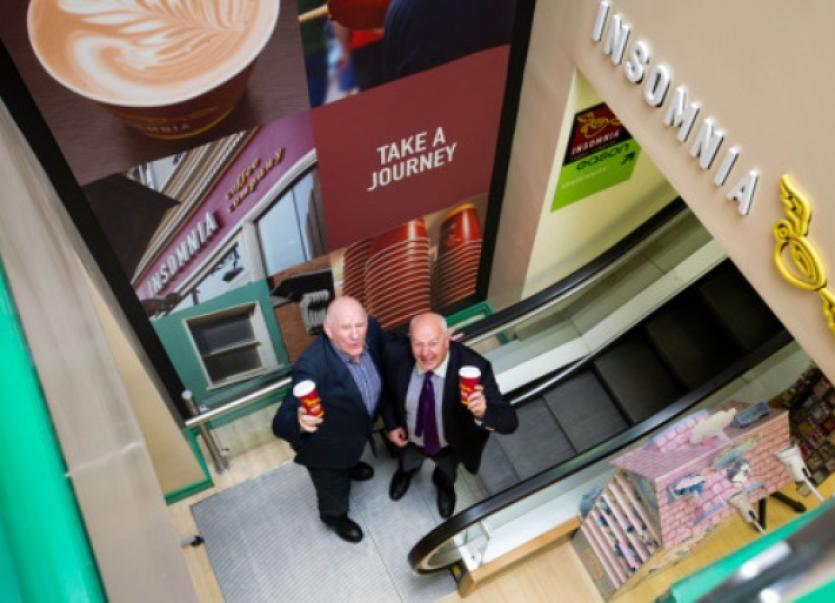 THE opening of a new Insomnia coffee shop at the Eason store on O’Connell Street is the first step of a major refurbishment of the store.

THE opening of a new Insomnia coffee shop at the Eason store on O’Connell Street is the first step of a major refurbishment of the store.

The Insomnia coffee shop, which was officially opened by its chairman - former Dragon’s Den star, Bobby Kerr - is located on the top floor of the Eason store - overlooking Cruises Street.

It is located in an area of the store which previously housed the music, arts and computer departments.

Insomnia, which will employ six people at its Limerick coffee shop, is understood to have spent a significant figure refurbishing the new coffee shop over the past few months.

Lynn Byrne, area manager of Eason, says the opening of the coffee shop means the rest of the O’Connell Street store will be refurbished before the end of the year.

“I think it is a pretty good success story for Limerick - with the rent issues and the (other) retailers who are pulling out of the city, we are trying to invest and maintain a workforce here in Easons and on the back of Insomnia opening we are going to refit the store later in the year so the rest of the store should get a facelift in line with the new Insomnia coffee shop,” she said.

Similar to the arrangement with other Eason stores, Insomnia, which has 70 stores across Ireland, has entered into a rental agreement for the space it is occupying at the O’Connell Street store.

“The partnership works really well; we get the book customer that likes to come in and browse, buy a book and then sit and have a quiet cup of coffee so it is a fantastic partnership to catch that type of customer,” said Lynn Byrne who added that both companies have benefitted from similar partnerships in Dublin, Cork and Galway.

According to Eason, the wider refurbishment works at the O’Connell Street store will begin in the autumn and are likely to cost several hundred thousand euro.

It is expected they will finish before the end of the year.

As part of those works, the interior decor of the store will get a facelift, new flooring will be laid and the new fittings installed.

The facelift of the O’Connell Street store comes less than a year after Eason expanded into the Parkway Shopping Centre.

“Limerick and Eason have gone from strength to strength,” said Lynn Byrne.