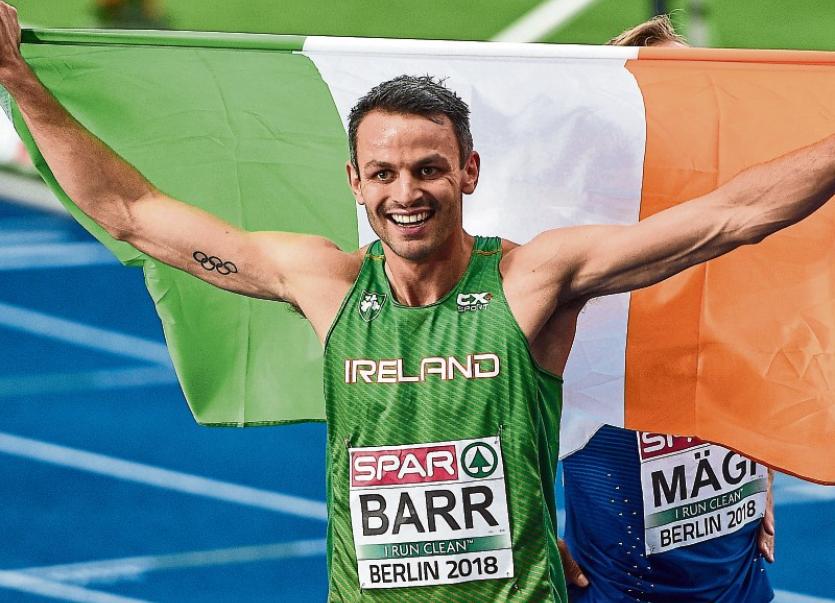 THE Mayor of Limerick, Cllr James Collins has hailed the European 400m hurdles bronze medal achievement of Limerick-based athlete Thomas Barr as a huge victory for the athlete himself primarily, for Irish athletics and for ‘sporting Limerick’.

On Thursday, the 26-year-old becoming the first ever Irish male medal winner in a sprint event at European level.

Mayor Collins, who earlier this week honoured international hockey player Roisín Upton, says the Waterford native and UL graduate is an inspiration to young people to never give up on their dreams.

“What Thomas achieved in Berlin goes beyond the honour of being our country’s first sprint medallist in the 84 year history of the championships. There’s a lot more to come from Thomas but this particular medal is as much about his journey as it is his performance,” he said.

“I remember reading around the time of his graduation at UL a couple of years ago with a Master’s Degree in sports performance that he was on the verge of walking away from the sport until he got involved with a top class regime at UL. That says a lot about what UL do and Limerick’s sporting status generally but speaks volumes about Thomas Barr,” he added.

This must be what it feels like when your a top guy who wakes up after breaking an 84 Year wait to win a senior Outdoor European Medal - @TomBarr247 #RaisingtheBarr pic.twitter.com/WdVi4l6lpj

Mayor Collins - a general election candidate - says Thomas Barr stuck it out and persevered and is now getting his just deserts.

“From a public awareness perspective, it started when he raced into the nation’s heart with stunning fourth place finish at the Rio Olympics and he has now gone a step further with bronze at the Europeans. From a strictly sporting sense, it’s a case of roll on the Tokyo Olympics for him but he’s already a huge winner for the country, for his native Waterford and his adopted city of Limerick,” said Mayor Collins.