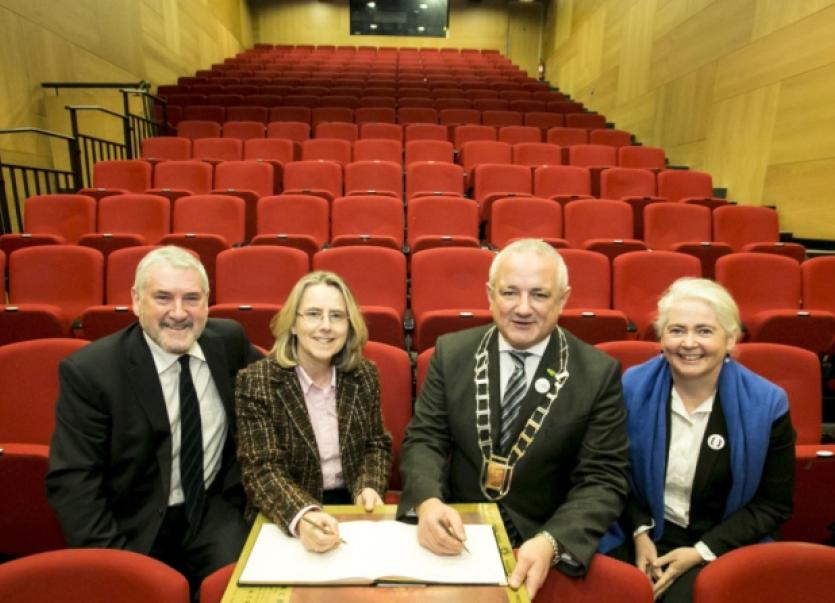 IT was an epic saga worthy of the stage. Finally, after two years, the long term future of the Belltable has been secured and its name will return to use.

The iconic city venue will be restored with the signing of a five year lease and service level agreement between Limerick City and County Council and the Lime Tree Theatre, who will take over operation of 69 O’Connell Street on a full time basis.

The theatre has assumed a sort of caretaker role over the last two years, with Lime Tree boss Louise Donlon instrumental in keeping it open - albeit in a project capacity.

The agreement for the Lime Tree to take over management and programming responsibility was signed this week, with Ms Donlon declaring that the rebirth of the arts centre was “crucial to the whole health and development of a fully professional arts sector in the city”.

A new brand for the venue will be launched early next year, as will a programme, soon to be unveiled. The recently refurbished offices in the neighbouring Credit Union - bought by City Council after the Belltable went into liquidation early in 2013 - will form a key part of the new arts centre, offering rehearsal and office space to local organisations.

Sheila Deegan, arts officer, said the “exciting revival of this significant venue means that it will once again be at the centre of arts development and practice in the city”.

Ms Donlon said that a person will be hired to programme the venue, while a programming committee will be put together to “supervise and monitor the vision for the venue and make sure the new person that comes in is adhering to that”.

“The Lime Tree will take full responsibility for the management and operation of the building,” she explained. “Up to now, it has really only been on a temporary basis - what started out as 6 to 8 months turned into two years,” she said of the innovative Arts Encounter programme, funded by the Arts Council.

“What frustrated us about it was that we couldn’t use the name. When you are in the marketing business, your brand is a huge element of it and selling shows there was always an uphill battle. We also didn’t have ownership of the space itself.

“The very good news is that we are able to use the name again. It is a huge relief but it will be the ‘new Belltable’, because it is very much a break with the past. It is a different model, but one that has lots of precedent elsewhere, where you have a venue effectively running two spaces.

“Theatre practitioners haven’t had a sort of innovation centre that they can go to and collaborate and network and meet like minded people to create new work. The Belltable will be that.

“It is a long term project, but I have no doubt in five, six, seven years’ time, the whole ecology of arts work in Limerick will have fundamentally changed, by far for the better, because of the presence of a space where people can feel that they can create work or to actually present it to an audience,” she added.