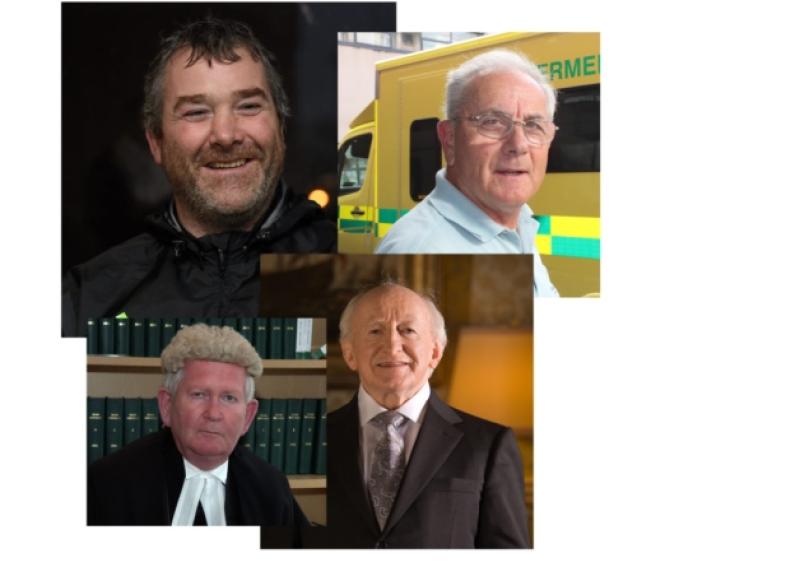 AS Limerick prepares to welcome in the New Year, David Hurley compiles some of the more memorable quotes from 2014.

AS Limerick prepares to welcome in the New Year, David Hurley compiles some of the more memorable quotes from 2014.

“I remember the Limerick of that time where you had an enormous choice of cinemas – the elegance of the Savoy. And then, coming down William Street, there was the exotic hardware institutions like Boyds, which had its own employment policy, and on the other side of the road, the smell of the open bags of meal of Mrs Harris’ shop, who was more famous than her son Richard. And then as you made your way down towards Sarsfield Bridge, you had Spaights. There was a kind of elegance to it all and what held it all together was the smell of bacon from Shaws.”

– President Michael D Higgins (circled, bottom) speaking in September after he became the first person to receive the freedom of Limerick City and County.

“A lot of the trees that were knocked were far too good to be used for firing.”

“Passages washed away; rubble, rocks, gravel and stones swept on to meadow fields and into slatted sheds; tracks dug through green fields; drains and culverts blocked; big holes dug in passages, crazy, crazy stuff. It was an act of God so there is no insurance.”

“Limerick is not a criminally violent place. Limerick is now is a peaceful place. For example, there has only been one homicide in Limerick since January 2013 and that’s almost two years. By contrast the news from Dublin is one of continuous murder and mayhem, as recently as on the news last night.”

“I had to drop them off near enough Keane’s shop, where it was dry. There was no other way for them to get in and out – the water was up to the horse’s belly, four feet or five feet easily. I had children and elderly people, teenagers, all sorts up on it. Sure you couldn’t refuse them. When people get caught out, they get caught out. What can you do only your best for them? It’s as simple as that.”

– Ger Hogan, St Mary’s Park, speaking in February after he was hailed a hero for ferrying people by horse and cart to and from the their homes in King’s Island following the worst floods in living memory.

“They’re very good, they’re just sleeping and eating at the moment. We don’t have a cranky one or anything like that, they’re all kind of chilled and relaxed.”

– James Slattery speaking at his home in Caherconlish in July shortly after he and his wife, Grace, welcomed home their quadruplet babies for the first time.

“Dolores was inside in a room, she was lying on the floor, curled up. She had her head covered and her face covered up. She was trying to protect herself. I gave her a hug. I tried to talk to her. She didn’t realise I was there at all. I put Lourdes water on her.”

– Dolores O’Riordan’s mother, Eileen, speaking in November after the singer was arrested at Shannon Airport following an alleged air-rage incident.

“It has been, from the beginning to the end, a magical tour around our own city, blessed by magnificent weather, marvellous crowds, wonderful temperament, great engagement - it is just a super spectacle.”

– Pat Cox, chairman of Limerick City of Culture, speaking in December following the conclusion of the The Giant’s Journey through the city.

– Cllr Elena Secas, speaking in May, after she became to first non-national to be elected to a local authority in Limerick.

“They didn’t have to ask me twice.”

– Anthony Foley, above, speaking in February following the announcement that he had been appointed to succeed Rob Penney as Munster head coach.

“The place (ED) was like a zoo. There were trolleys all over the place. The nurses and the doctors were rushed off their feet. It was impossible to sleep with the noise, with banging and clattering and people being moved all over the place. I was on a trolley literally in the middle of the floor and people banging off me. I was moved, I’d say without exaggeration, every 10 or 15 minutes.”

– Ivan Morris, Limerick Leader golf columnist and a patient at University Hospital Limerick, describes his 24-hour wait for a bed in the emergency department following his admission with chest pains in October.

“I know each one of the team since they were Under 6 playing in the field, they are a fantastic bunch of lads what with their commitment to the sport and their dedication. They are a pleasure to work with.”

“She is not just any Grandmother, she is half-Breton and half-Irish. “She is tough, daring and mischievous. Her char-acter is intrepid, adventurous and full of tenderness overall.”

“Can I be very direct, I am not here as a healer, I am here to do a job, and my job is running the City of Culture organisation. I am not in that business. I think I am a practical manager, and that is what I will do and I am looking forward to it.”

– Mike Fitzpatrick, speaking as he was appointed ‘interim head’ of City of Culture in January.

“I’ve changed an awful lot, it’s not worth it, there’s an awful lot more to life than going down the wrong road.”

– Dean Phillips 19, from Ballinacurra Weston, on receiving an award at the inaugural Limerick Garda Youth Awards in November.

“I don’t think it’s right bringing our supporters down there – we have three bottle-necks on the way to Limerick, we have Tuam, Claregalway and Clarinbridge. It’s not a suitable venue for Mayo, it’s not a venue that they know, we’re used to going to Roscommon, Galway, Sligo and Leitrim; People know where to park and where to go.”

– Minister-of-state Michael Ring speaking in August after the GAA confirmed the Gaelic grounds as the venue for the All Ireland semi-final replay between Kerry and Mayo.

“This is an attempt to preserve the prestige that came with the mayoralty. It will give a clear recognition [to the title] and will address an issue which has caused a lot of confusion”.

– Conn Murray, ceo of Limerick City and County Council, speaking in November after councillors voted to abolish the title of Cathaoirleach in favour of creating a new office of Mayor of the City and County.

“In my experience, he was a loyal and steadfast man, the epitome of reliability. You could always depend on him. To me, it was a joy to work with a man who was not constantly consumed by personal ambition, by a desire for self-advancement or self-aggrandisement.”

– Des O’Malley speaking in February at the graveside of his late PD colleague Peadar Clohessy.