Reliving the News: A man synonymous with good 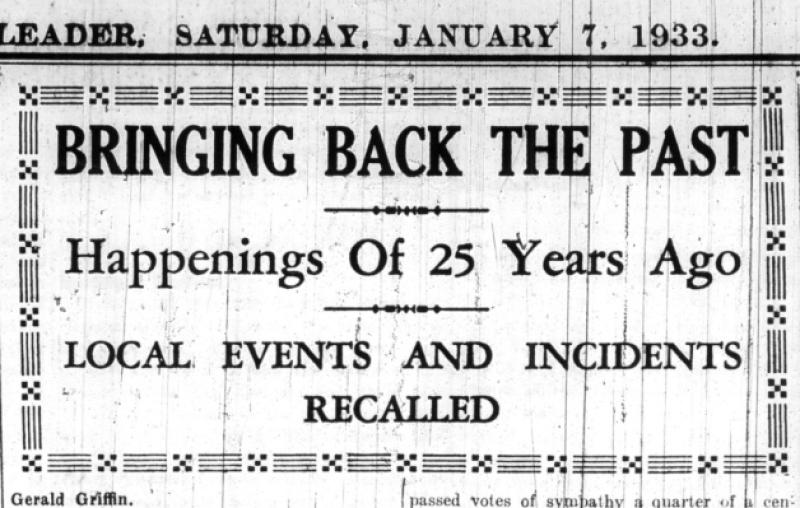 This article comes from the orginal “Bringing Back the Past” column that appeared in the Leader in 1933. It shares an article about the death of Fr Casey which happened 25 years ealier in 1908.

This article comes from the orginal “Bringing Back the Past” column that appeared in the Leader in 1933. It shares an article about the death of Fr Casey which happened 25 years ealier in 1908.

Every public body in the city and county passed votes of sympathy on the deaths of Rev.T. Lee, PP, Croom, and Rev. Fr. Casey, PP, Abbeyfeale. Glowing tributes were paid to both pastors, and the keenest sorrow was expressed for their  deaths.

They were two great priests who filled a big place in the public and national life of the country, and the regret caused by their demise was sincere, heartfelt and  widespread.

Father Casey was a native of Mitchelstown district. Here, as a correspondent from the area wrote: “The name of Father William Casey was a synonym for all that represented goodness of heart, exalted character, lavish benovelence, devotion to the poor and lowly, and patriotism that was as high-minded and usefual as it was courageous and  indefatigable.”

It is of interest to recall too, that Father Casey was a near relative of John Sarsfield Casey, “The Galtee Boy,” who spent many years in exile as a Fenian convict and whose trial before the Queen’s Bench in Dublin in 1875 for a series of letters in the Press, depicting the poverty and oppression of the Galtee tenantry, was of national interest and importance.

At Limerick Quarter Sessions on January 3rd, 1908, Judge Adams paid a glowing tribute to Father Casey, who had the happiness, he said, to see before he died, the whole of the parish of Abbeyfeale, at one time divided into several estates, purchased by the tenants. Personally, he added, “he felt the loss most bitterly. Father Casey was his dear and kind  friend.

Father Casey was the arbiter in many disputes, not only in his own parish but in large districts of the county and when his decisions came before him (the Judge) he was astonished at the shrewdness, justice, and ability which characterised  them.”