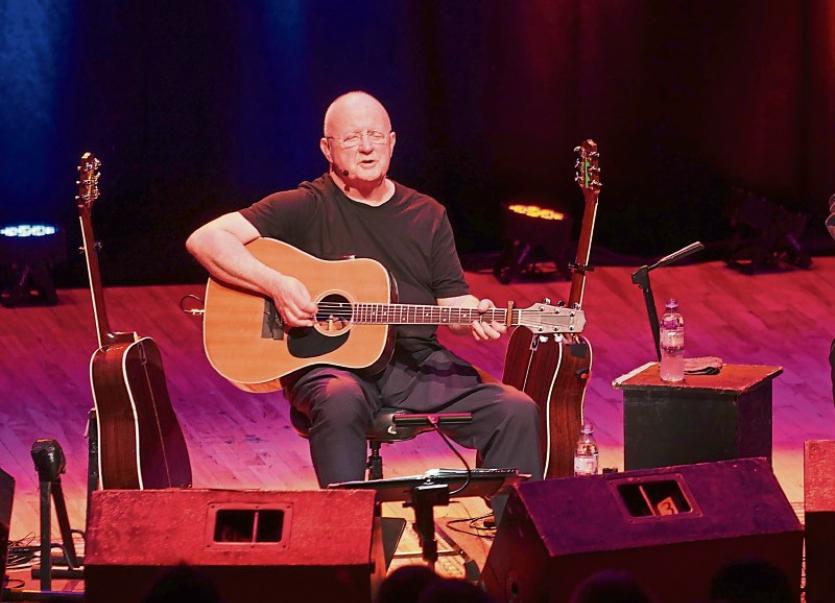 Christy Moore performing in the UCH, where he returns in April 2019

CHRISTY Moore has paid tribute to Limerick singer-songwriter Johnny Duhan’s classic song The Voyage and the man who wrote.

Speaking as part of a University Concert Hall video series to mark its 25th-anniversary and announcing his 2019 concert at the venue, Moore said the song gave him a break in the late 1980s.

“Over the years, Limerick has been very, very good to me. I always loved coming into town,” he said.

“And of course, Johnny Duhan, gave me one of his biggest songs when he shared The Voyage with me, way back 30 years ago. And it was through recording Johnny's song that I broke through into a different kind of genre almost.”

The Newbridge balladeer told the Limerick Leader previously that his “earliest memory” of playing in Limerick was in 1965, one of his “first ever paid gigs” that helped to jumpstart a career that has spanned more than 25 solo albums, stints with Planxty and Moving Hearts and gigs all over the world, from the smallest pubs and clubs of Ireland and the UK to the world’s premier concert halls.

“I was 19 and working in the National Bank in Askeaton. One night I was singing a few songs in May Collins’ pub on the Square. A tour guide heard me and invited me to sing in the George Hotel for a bunch of touring Americans. It was one of my first ever paid gigs. It did not go very well but I got £5 which was a half weeks’ wages in the bank. I left the bank following year and took off on this journey.”

Moore released his first album, Paddy on the Road, in 1969, but it was the follow-up three years later, Prosperous, that brought him to prominence. Known for his raw honesty and rhythmic style, Moore has rarely looked back and has constantly striven to reach new heights, either on his own or with Planxty co-founders Liam O’Flynn, Andy Irvine and Dónal Lunny.

In that same interview, he called the UCH a “world class” venue.

For this UCH video series, he says he “remembers very well (his first UCH performance) because, obviously, I had no idea what to expect. And then the gig just flew out and we ended up doing nine shows and ever since it has been one of my favourite venues in the country.”

Moore also paid tribute in the short video to The Clancy Brothers and Tommy Makem, saying that if he had just one chance to be on stage with any artists, it would be them.

“I first heard the Clancy Brothers singing Trad songs 60 years ago. I went to hear them in 1962 and my whole life changed. As did the lives of many who heard them.

“I think the state of Irish music and Irish song-writing is stronger now than it has ever been. There is such a diversity now of writers and singers and bands in different genres. I don't think it has ever been as strong and as healthy as it is now.

“I think folk songs, they are not a fashion. The reason they have lasted for centuries is because they are good songs. They transcend the movement of time.”

Christy Moore will return to UCH on Friday, April 26 and tickets are on sale now. See www.uch.ie.