Words, music and a lot more at Eigse Michael Hartnett in County Limerick 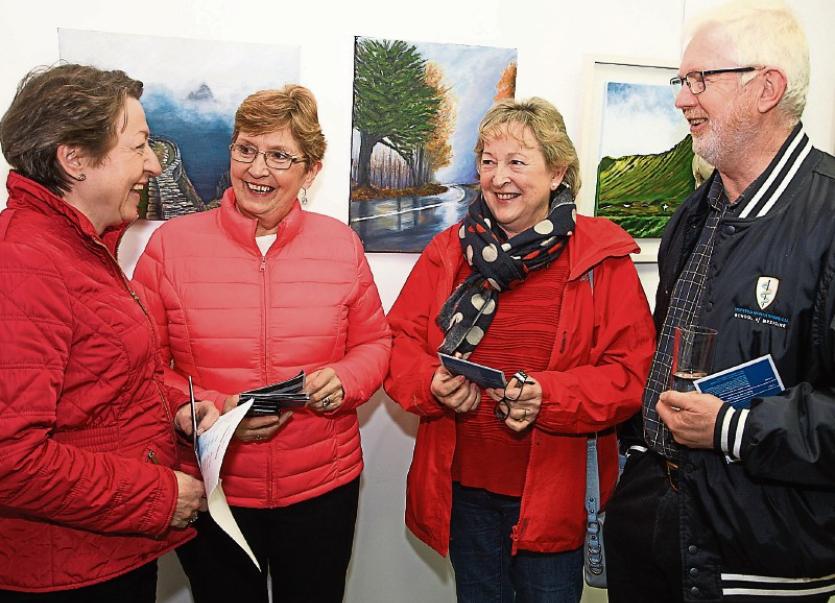 Pictured at the launch of Eigse Michael Hartnett at The Red Door Gallery, Newcastle West were Helen Beckett, Betty O'Sullivan with Mary and Pat Geaney

THE poet Michael Hartnett has left a great legacy for the world to enjoy but he has also left a world of memories, according to Cllr Michael Collins, when he launched Eigse Michael Hartnett 2018.

And he recalled his own memories of playing music in Newcastle West pubs and discussing his favourite tunes with Michael.

“He loved music,” said Cllr Collins, who is chairman of the Newcastle West Municipal District. He recalled too playing a last tune at Michael’s graveside in October 1999.

“Michael is very close to my heart,” he told those gathered in the Red Door Gallery for the launch of this year’s Eigse which runs from Thursday, April 12 to Saturday, April 14.

Also among those taking part will be award-winning novelist John Boyne, author of The Boy in the Striped Pyjamas, who will be joined on stage by Limerick singer songwriter Emma Langford and poet Edward O’Dwyer. Another evening will see Mike McCormack, author of Solar Bones, teamed up with poet Robyn Rowland and the Capriccio String Quartet.

“Honey, I shrunk the kids”, is the tongue-in-cheek title given to this year’s Michael Hartnett Memorial Lecture which will be delivered by Irish literary expert and academic, Declan Kiberd.

Éigse 2018 will also explore and celebrate the link between Michael Hartnett, food, cooking and the kitchens he survived in Lower Maiden Street, Camas and further afield. ‘Pulled Pork and Poetry’ will feature a cookery demonstration and lunch with by award-winning chef Tom Flavin, Executive Chef at the Strand Hotel in Limerick, with readings of foodie poems.

But there is much more to enjoy at Eigse with a poetry slam with valuable prizes, poetry workshops, a literary walking tour,  a special screening of the film Song of Granite about the late great Joe Heaney, and a chance to hear Limerick’s Yukeladies in action.

An installation from the HearSay Creative Audio Festival see people start out on a journey into the magic of creative sound.