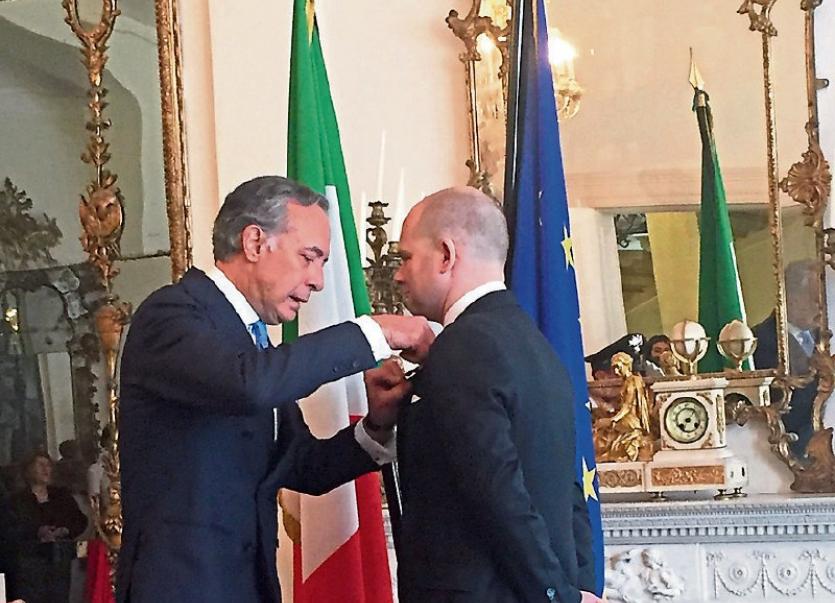 JOHN Gilhooly’s trophy cabinet must be full to the brim as he has received another prestigious honour.

The chairman of the Royal Philharmonic Society and director of Wigmore Hall has been as decorated as Knight of the Order of the Star of Italy, by the president of Italy.

The Lisnagry man was invested with the insignia of Cavaliere dell’Ordine della Stella d’Italia by His Excellency Ambassador Pasquale Terracino at the Italian Ambassador’s residence in Belgravia, London.

The Order of the Star of Italy is awarded for promoting Italian excellence, culture and good relations internationally.

It is the latest accolade for Mr Gilhooly, who is still only aged in his early forties. He became director of London’s Wigmore Hall in early 2005 when he was just 32, making him the youngest leader of any of the world’s great concert halls. He is credited with transforming the Wigmore’s fortunes.

In 2013, he was awarded an OBE by Her Majesty Queen Elizabeth II for his services to music. In recent years Mr Gilhooly has also been decorated in Finland, Austria, Germany with various Presidential Orders of Merit. He made the Sunday Times Most Influential People in Britain list in 2016. The only other person from the Republic of Ireland to make the top 500 was Graham Norton.

The University College Dublin graduate has spent most of his working life in England, and is obviously well travelled, but County Limerick most certainly remains home.

He is a regular visitor to Lisnagry to see his family. Brother and tenor, Owen Gilhooly’s Mid-West Vocal Academy and Music School continues to go from strength to strength. Last Autumn, John was especially proud to introduce one of the concerts in the classical series in All Saints Church, Castleconnell.