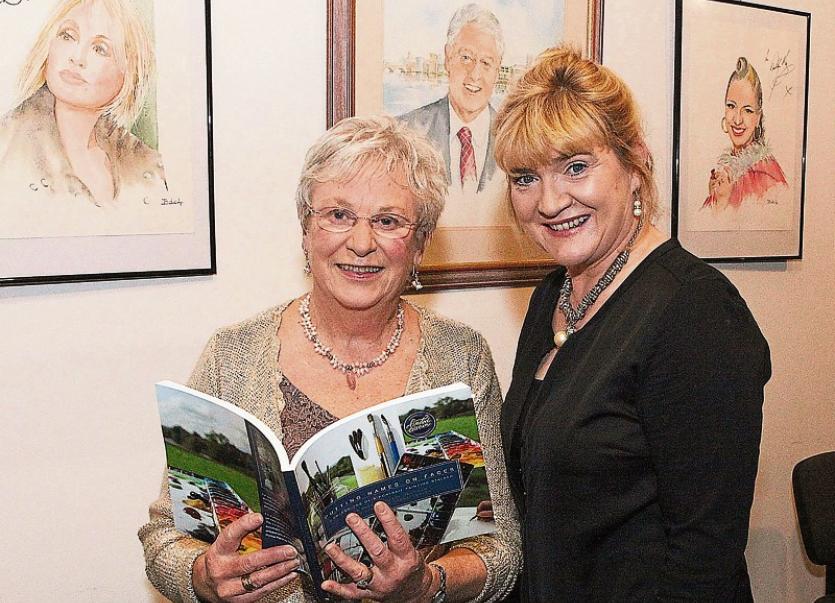 BARBARA Hartigan describes her book launch in Dooradoyle Library as “absolutely magic” and it was all thanks to her “devious children”.

RTE’s Cathy Halloran did the honours and was effusive in her praise of Putting Names on Faces - Confessions of a Portrait Painting Stalker. For decades she has been painting portraits of famous names and politely asking them to autograph them.

They have been collated in book form, along with stories about how each of the 70 paintings came about and Barbara’s own remarkable life.  She says the tome was completely inspired by her children – Shane, Clare, Erin and Tara.

“They were sick and tired of listening to me constantly saying I wanted to do it and it would get up and running and then the next thing, some hitch would occur and somebody would back off from it.

"It just kept falling through and it got to the stage when Dermot Walsh [who she had been collaborating with] died, I just didn't even talk about it any more, I put it all in a box. It obviously wasn't going to happen,” said Barbara, who was joined by a huge crowd of friends and family for the launch in Dooradoyle Library.

The Hartigan siblings started work on the project last January.

“They were so devious it was unbelievable!” laughed Barbara. After months of research her husband Leslie suggested now was the time to reveal their secret to Barbara as there were details that only she would know.

“The work was presented to me then to become involved. They were all brilliant,” said Barbara. And the fruits of their labour was there for all to see at the launch.

“It was absolutely magic, it was the best thing ever. I was so happy, I was looking around at the lovely crowd that were there - they were all friends, and it was just so nice. The welcome was lovely in the library, they made us feel very special,” said Barbara.

Seventeen portraits were displayed on the walls including her very first one of Limerick comic duo Tom and Paschal.

“It was lovely to see Paschal there - he was very excited about it. Noel C Duggan drove up from Millstreet and Michael Fagan was there - they were so instrumental in helping me all through the project. I said when I saw Noel: 'I can't believe you drove all the way up' and he said, 'I'd have come up on my knees, I wouldn't have missed it'. That was the air of the whole night. It was just lovely and Cathy was brilliant, she had researched the book. It was very humbling."

In a lovely twist, this time it was Barbara who was the one being asked to autograph her work. The book was so warmly received by the huge crowd that emotions ran high and one or two tears were shed.

“I was just so happy. I never thought it was going to be this exciting! I have nothing at all organised for Christmas – it looks like it could be sardines on toast!” said Barbara.

But as a former housewife of the year she is sure to rustle up something delicious. Putting Names on Faces - Confessions of a Portrait Painting Stalker is available in O’Mahony’s and through Amazon on-line.