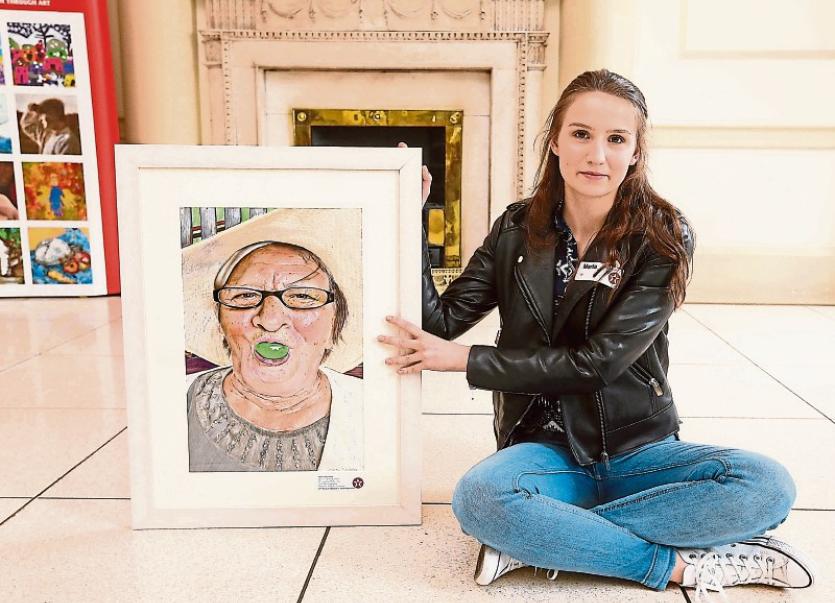 Marta, with her winning portrait of her Polish grandmother, Marry, which has brought her both national and international acclaim.

A PAINTING of her grandmother has brought both national and international success for Marta  Turalska, a 17-year-old student from Newcastle West.

Earlier this year, Marta was the outstanding overall winner of the Texaco National Children’s Art Competition and brought home €1,500 in prize money.

But as a result of her win she was invited by the Japanese International Foundation for Arts and Culture to travel to Japan and to exhibit her painting, “My Grandma with Grape” at the prestigious National Art Centre in Tokyo.

Her painting was one of 400 art works selected from 11,000 submitted by students aged 14 upwards from some 17 countries from around the world.

“It was amazing,”  Marta said of her trip where she got to view all the other art works on display. “They were all amazing. They were all different,” she said, adding that the work from some countries reflected the traditional culture of that country. The paintings by Japanese students, she added, were very detailed.

Her own painting of her grandmother Marry who still lives in Poland was based on a fun photograph Marta  herself took during a summer visit to her grandmother. It took  month to complete and was executed in paint, colouring pencils and white pen. . It was described by the judges “as a wonderfully composed and superbly finished portrait study.”

Asked how her granny is taking her international fame, Marta said: “She believe it. But she is fo proud of me.”

Marta, is the daughter of Artur and Bogusia Turalska and was born in Poland. But she has lived for the past seven years in Newcastle West where she is a student at Scoil Mhuire agus Ide.

Marta’s art teacher at the school, Ciarán O’Sulilvan, said they had been aware of Marta’s ability for many years. “We are delighted and proud but not surprised,” he said, when she won the 62nd National Texaco Children’s Art competition.

The Tokyo exhibition has been described as a global showcase for the world's best young artistic talent and its   purpose is to provide an international platform for young people to engage in their artistic exploration of the world and to nurture a broader understanding of the experiences and events that impact on the younger generation across different cultures.