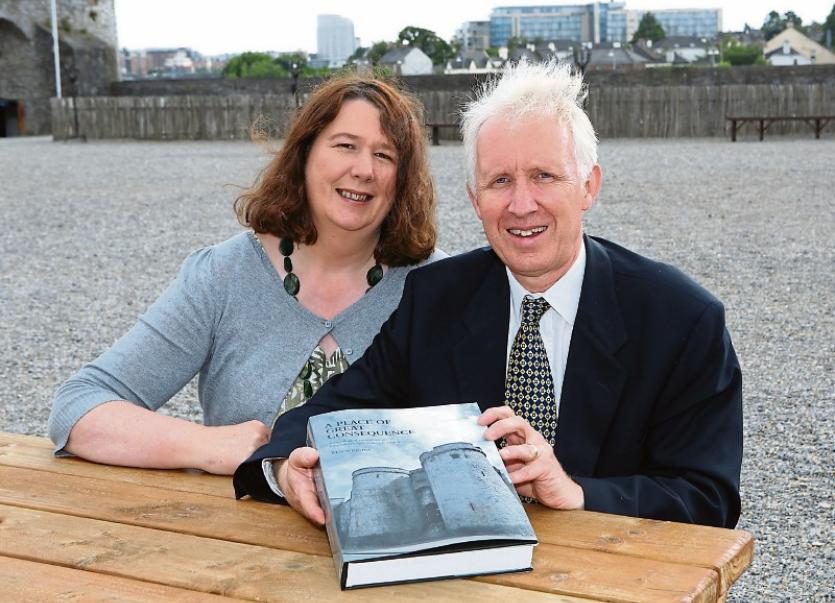 Eileen White Wiggins, archaeologist and Ken Wiggins pictured with a copy of A Place of Great Consequence PICTURE: Liam Burke

A new book detailing the results of eight years of archaeological excavations at King John’s Castle has been welcomed as a “wonderful resource to explore Limerick’s rich heritage”.

Entitled A Place Of Great Consequence, the publication by author Ken Wiggins outlines the fascinating history of the castle through the 13,000 artefacts uncovered during excavations between 1990 and 1998.

From early medieval pottery and arrowheads to jewellery, coins and building materials spanning some 800 years, these items provide a unique insight into life in Limerick from its earliest settlements up to the present day.

Alongside descriptions and illustrations of many of the items uncovered, the author also details the history of the castle and the settlements that pre-date it, with a series of maps and other illustrations showing what it would have looked like at different times in its history.

Beginning with pre-Viking days, the narrative moves on to show how the Hiberno-Norse inhabitants of Limerick further developed the site before the Anglo-Normans arrived, and the decision to build the castle was made.

All aspects of the castle’s development are explored, from construction in the medieval period down to reinvention as a heritage property in the late twentieth century.

What emerges is as complete a picture as has yet been provided of life in Limerick from before the Viking settlement to the last days of the Castle Barracks.

More than 13,000 artefacts, including ceramics, objects of copper-alloy, iron, wood, leather, bone and stone, were found during the course of the excavations. Among the finds was a pistol with a copper alloy barrel, iron firing mechanism and wooden stock, used during the great siege of the castle in 1642, as well as contemporary written accounts of the events. A pamphlet printed that year, reporting the capture of the castle, described Limerick as ‘a place of great consequence’, a phrase that provides the title for this major new book.

Pottery found during the excavations also offers proof that the castle was a centre for trade with Europe during the middle ages, with goods being transported by sea. During the 1993 excavation Limerick’s oldest house, built on the castle site before 1175, was uncovered. Limerick’s oldest road, dating from the same period, was also discovered by archaeologists five metres below the courtyard of the castle.

Also of great interest are the items relating to the settlement of Limerick by the Vikings and their descendants - the Hiberno-Norse inhabitants in the eleventh and twelfth centuries.

They established a thriving community on the site with their own houses, laneways and property boundaries, which had to be abandoned when the castle was built during the reign of King John in the early thirteenth century.

Original nails used in the construction of a Hiberno-Norse house dating from around 1190 were uncovered, as was a thirteenth-century gold stirrup finger ring, set with a small oval sapphire.

Speaking at the launch of the book at King John’s Castle, Ken Wiggins said: “It has been my pleasure to explore the treasure trove that is King John’s Castle. The book provides a unique insight into life at the castle through the ages and is written in a way that will appeal to the general public and academics alike.”

John Ruddle, chief executive of Shannon Heritage congratulated Mr Wiggins on his achievement in writing the book “We are delighted to be managing the castle as a visitor centre and understanding the castle’s past through these fascinating artefacts and interpreting them for our visitors has been crucial. I know that this publication will be a wonderful resource to explore Limerick’s rich heritage and I wish Ken every success,” he said.

Published by Wordwell in association with Shannon Commercial Properties, the book is available from www.wordwellbooks.com and all good book shops, retailing at €30.