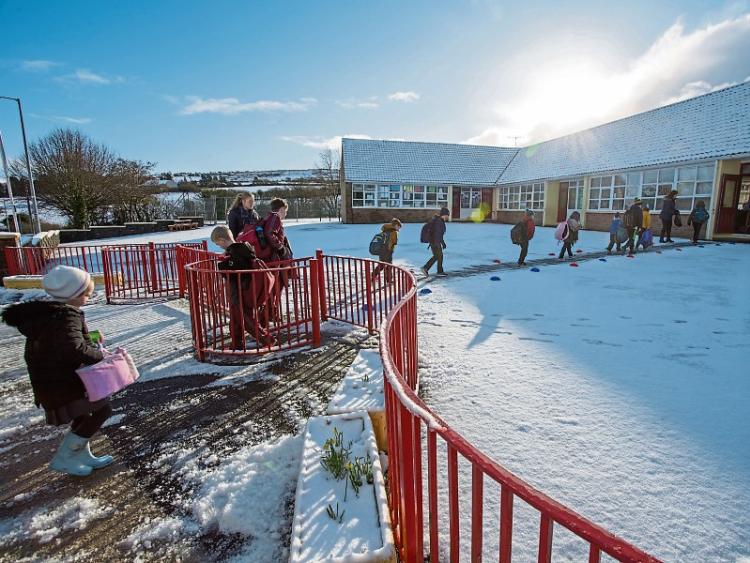 Pupils arriving for a delayed 10.30am start at Glengurt National School in Tournafulla | PICTURE: Marie Keating

Met Éireann has updated its status yellow weather alert warning that “significant accumulations” of snow are possible in parts of Limerick this Thursday as the cold snap continues.

Following snowfall overnight, many parts of Limerick were covered in a light dusting of snow this Wednesday morning – creating difficulties for some commuters.

The main road from Kilmallock to Bruff was particularly treacherous while on the main N21 between Newcastle West and the city drivers were being cautious and reducing speed.

A fallen pole led to traffic hold-ups on the N69 while there were also lengthy delays on the M7 following a multi-vehicle collision near Birdhill.

A spokesperson for Limerick City and County Council says it is monitering the situation and is in regular contact with other agencies.

In its latest update, Met Éireann says it will continuing very cold for the remainder of the week with “widespread frost, ice and lying snow” in places.

A status yellow snow/ice warning, which was issued on Tuesday morning, remains in place until midday on Saturday.

“Further wintry falls in parts of the southwest, west and north today but the showers will ease later,” states the warning.

“On Thursday, a wintry mix of rain, sleet and snow will move in accompanied by strong easterly winds. Significant accumulations of snow are possible on high ground and with some accumulations to lower-levels at times,” it adds.

We have updated the text of our current Status Yellow Snow-Ice warning. For full details please see https://t.co/oOxITrsnvw pic.twitter.com/XOhEtSZzC1

According to the national forcaster, temperatures in Limerick are unlikely to rise above 5 degrees over the next three days.