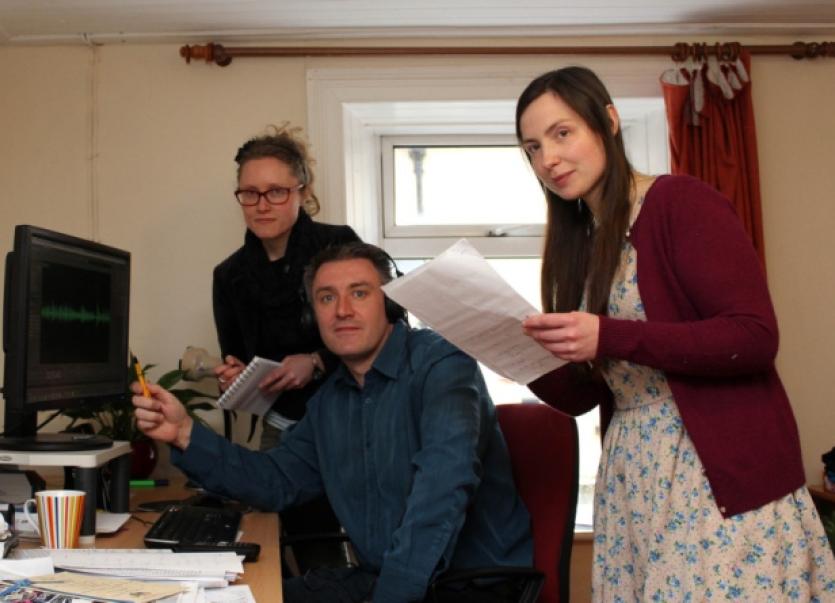 A GROUND-BREAKING sound portrait of Limerick featuring everything from the arrival of the Giant Granny to the Pallasgreen Passion play has seen a County Limerick multimedia production company secure a top honour in New York.

A GROUND-BREAKING sound portrait of Limerick featuring everything from the arrival of the Giant Granny to the Pallasgreen Passion play has seen a County Limerick multimedia production company secure a top honour in New York.

Kilfinane-based Grey Heron Media has won two awards in the New York Radio Festival Awards 2015 this week, including a gold medal for their sound portrait of Limerick – As It Lives and Breathes.

This series came about as a result of a unique commission from the two Limerick-based broadcasters, Limerick’s Live 95FM and RTÉ Lyric FM, as a way to mark Limerick City of Culture 2014. It features hundreds of Limerick voices, sounds and stories, all recorded on location around the city and county,

As It Lives and Breathes takes the listener on an aural adventure. Over 12 richly textured episodes, As It Lives is a meditative and playful sonic portrait of Limerick, the place and its people, featuring only sounds, voices and music recorded by the multi-award-winning Grey Heron Media team on location in Limerick city and county.

Aodán Ó Dubhghaill, head of RTÉ Lyric FM, and Joe Nash, chief executive of Limerick’s Live 95FM, wanted to mark Limerick’s year as National City of Culture in 2014. They came together for the first time in a unique collaboration and commissioned Limerick’s multi-award-winning Grey Heron Media to produce a pair of series to celebrate life in Limerick in 2014, the result was As It Lives and Breathes and, the well-received, Cultural Passions, which features 36 Limerick culture-makers in conversation.

As It Lives and Breathes was written and produced by Grey Heron’s creative team, Diarmuid McIntyre, Mairead O’Connor and Mary McDonnell, who also secured funding from the Broadcasting Authority of Ireland for the series, from the television licence fee, under the Sound and Vision scheme.

Diarmuid McIntyre, the creative director of Grey Heron Media, who travelled to New York this week to receive the award, said, the collaborative team are very proud of this series.

“The approach we took to its production, setting ourselves the challenge of capturing the character of Limerick in 2014 through only sounds, voices and music we recorded in Limerick, really fired us up creatively,” he noted.

“We are delighted that this series, specifically commissioned by Limerick’s Live 95FM and RTÉ Lyric FM for City of Culture 2014 has received such prestigious international recognition. Diarmuid and the team at Grey Heron Media work closely with us on a regular basis and, in this series, they really captured the excitement, drama and humour of a wonderful year in Limerick. The BAI also deserve great credit for backing the venture, through the Sound and Vision fund,” he said.

The scale of the achievement of the award in such a hotly contested arena, is underlined by the other New York Radio Festival winners, including such programme makers as WYNC’s Radiolab, the BBC and Deutschlandradio.

“The joint-broadcast of such an artistically bold series by the two broadcast partners was a vindication of the creative terms on which the Grey Heron team approached this important project, marking Limerick’s special year in 2014,” said Mr McIntyre.

Both broadcasters paid tribute to their teams who supported the production, including Gillian Devlin and the team at Live 95FM and Eoin O’Kelly and Olga Buckley at the Lyric Feature, and both stations’ commitment to their audiences.

Joe Nash said: “I want to acknowledge Live 95FM’s team at the station for their commitment to this kind of quality documentary programming, which is relevant and engaging for our Limerick audience.”

The series was broadcast on the Limerick Today programme on Live 95FM and from RTÉ’s Limerick studios, during Lorcan Murray’s Weekend Drive, between October 2014 and February 2015.

The good news didn’t end with As It Lives’ Gold Medal, the Grey Heron team also picked up a bronze medal in the history category, for their RTÉ Documentary on One feature, They Had No Choice - The Story of the Irish Horse At War, which was broadcast last September to mark the 100th anniversary of the beginning of the First World War. Another RTÉ Doc on One which the Grey Heron team contributed to also picked up a Finalist Award in New York, this time the documentary, Con Carey and the Twelve Apostles, told the West Limerick story of the twice-buried Con Carey.

Grey Heron have previously won international awards for another Limerick story. Their documentary Take No More, on the Kilfinane school standoff, won Gold in New York in 2013.

New York Festival’s International Radio Program Awards honours the most innovative work in radio broadcasting from around the world. This year, the Grand Jury selected 289 finalists from entries submitted from over 30 countries worldwide. Entries were judged on production values, organisation, presentation of information, creativity, and use of the medium.

You can listen to both As It Live and Breathes and They Had No Choice The Story of The Irish Horse At War at www.GreyHeron.ie