Then and Now: The short life of Con Colbert celebrated in song and verse 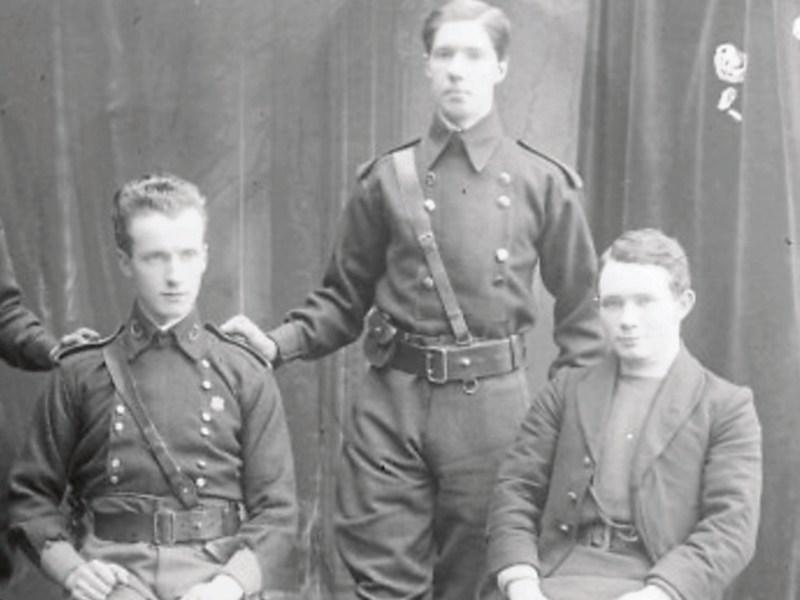 Famous picture of Con Colbert (far right) with other members of the Fianna Éireann Council Picture: National Library of Ireland

CON COLBERT was shot on May 8, 1916 for his part in the fight for Irish freedom. Last week we brought his story up to the night before his death.

David Smith wrote the following lines about Con’s last night, before his execution.

Farewell my lovely Moanlena, I’ll not see you more,

Farewell to Athea also, Where I lived in days of yore,

My Bible to my sister I leave, my comfort through the years,

Do not sigh or do not weep, for the Lord will wipe away all tears,

Do not visit me, in this place, it would grieve us both to touch,

For I pass away at dawn of day for a cause I loved so much,

These three buttons I also leave, from my uniform-worn proud,

For I have nothing else to give, and await my funeral shroud,

When you hear the awful shots, around the heavens roll,

Say ‘An Ave’ for my comrade’s dear, and their departed souls.

The British soldier who was ordered to pinion him, asked for the privilege of shaking his hand. Together with Michael Mallon, Sean Huston, and Eamon Ceannt, Con was shot in Kilmainham Gaol at daybreak on May 8, 1916 and buried in quicklime in a mass grave in Arbour Hill Prison.

Such was the noble, and dignified death of the brave young Volunteer from West Limerick, who died as he lived, a soldier and a saint. Con had his own definite opinion as to where his duty lay - to God and to his country. He went that way regardless of censure, no matter what the source, and so he lived and died happily.

Around the heart fires in the homes among his native hills and valleys, of Athea they still speak of Con with love and reverence, and the passing years have but helped to mellow the honour and respect with which his name is spoken. Colbert Street, and the Community Centre, is named after him.

The people of Athea erected a beautiful hall in his memory which was officially opened by President Erskine Childers on January 20, 1974. His name over the door and the tricolour flying high ensures that he will never be forgotten, for the part he played in Ireland’s fight for freedom.

A plaque was erected on the gable wall of the farmhouse, where he was born at Moanlena, the inscription reads,

Hero and Martyr enrol his name in a scroll of fame, in letters of Purest Gold.

A monument dedicated to the memory of Con Colbert, one of the executed leaders of the 1916 Easter Rising, was unveiled beside the Con Colbert Hall Athea, on Saturday October 24, 2015. The unveiling was performed by his great-niece Aide Colbert Lennon, who traced the Colbert family history around Athea, during her address. Aileen Dillane was the MC, and the event was organised by West Limerick Republican Monument Committee. A good crowd was in attendance, and the afternoon was dry apart from a few light showers.

The location of the Plaque was amongst the trees and placed on the elevated pathway wall. The special guest speaker was Sinn Fein President Gerry Adams, who praised Con’s involvement in the Easter Rising, and spoke about the current position in Northern Ireland. A highlight was Johnny Mullane’s song about Con and Athea. Short extracts from his final letters to relatives were also read out. A lovely exhibition compiled by the children was on display in the Hall, and refreshments were provided there also.

Con Colbert is still associated with Limerick Railway Station, and a new book was published about him by John O’Callaghan. That year Con was very much in the limelight as Ireland marked the centenary of the 1916 Easter Rising. A full limestone statue of Con, crafted by O’Connor’s, was unveiled at the gable wall in Moanlena, by Mayor of Limerick Liam Galvin, and by his granduncle Con Colbert on Sunday May 8. The oration was delivered by John O’Callaghan, historian and author of the book about Con.

A bronze bust of Con, crafted by Jarleth Daly was unveiled by his granduncle Con Colbert in Athea village on Sunday September 25, 2015. The oration was delivered by widely known Timmy Woulfe. It was part of a Commemoration Weekend and a lot of events were held to mark the centenary of his death. Con Colbert is also remembered on the Athea Heritage Trail around the village. I will conclude with a few lines I put together about a man whose favourite phrase was for my God and my country.

For the way you loved your fellow man

For the way you fought and never ran

For the way you fought away all crime

And stood on guard all the time.

For all your deeds so gallant and brave

For the way you walked in the light of God

And prayed each day to our almighty Lord.

Every Limerick man will remember you.

For all the brave deeds you did do

When you died all Limerick was sad

For you were the bravest soldier we ever had.

I came across a song about Paddy Dalton who I featured a few weeks ago on the 100 anniversary of his death by Crown forces in Gortnaglanna on May 12, 1921. It was written by Tommy Scanlon and I include four verses as follows.

In Athea's lonely churchyard, by the Gale's gentle waves,

Our hero lies sleeping in a green Irish grave,

Our own Paddy Dalton the bravest and best,

We will miss him forever in lovely Coole West.

He fought for his country, and died for the cause,

Against the cruel invaders he hated their laws,

For the dawning of freedom from slavery's chain,

He gave his young life, but he died not in vain.

To your memory dear Paddy, who fought on the day,

And to all the grand boys from the old I.R.A.

Who fought for their country and died for their land,

To your memory dear Padraig, we have got a fine band.

We will play you sweet music a lullaby of rest,

And softly 'twill steal o'er the hills of Coole West,

We will beat the drums loudly and play Geal mo Chroi,

Until Ireland again be a home for the free.