Then and Now: Our debt to Sean lives on 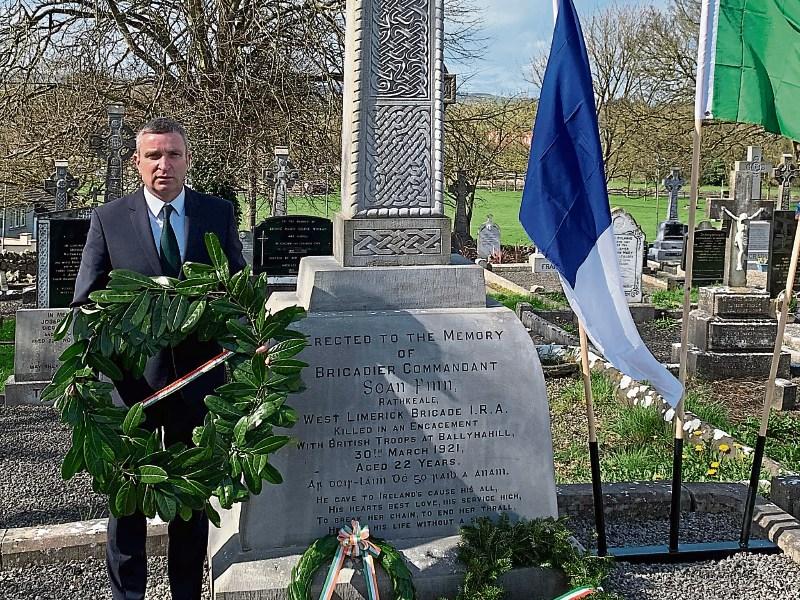 Minister Niall Collins lays a wreath at the grave of Sean Finn on the 100th anniversary of his death. A memorial service was organised for Sean Finn by the Rathkeale GAA club

WE CONTINUE on from last week the story of Irish Volunteer Sean Finn who lost his life, in the fight against the Black and Tans at Ballaroe, Ballyhahill 100 years ago.

A strong wind was blowing the sound away from where the other Volunteers were billeted, removing any last chance they had of help arriving. The battle continued for over two hours before Sean Finn was shot. He called out to his comrades, as he fell mortally wounded: “Goodbye lads carry on I am done”

He had given his all on that black March day to help his comrades, who had been surprised by the enemy. Volunteer Seamus Finn aged 18 years recovered his dead comrade’s rifle and ammunition, as the bullets ploughed ridges, around him from about forty yards away.

The British eased off after this remarkable achievement, but the fight continued until a welcome fog crept in from the river Shannon, and completely screened both forces. The Black and Tans withdrew, allowing the brave Volunteers to make their way to safety and to fight another day. Dave Quane recovered in time from his injuries, and the others continued the fight, against the enemy forces. Volunteer Seamus Finn was promoted to First Lieutenant following his heroic act and Tom Howard was killed in action at Lackelly in East Limerick on May 2, 1921.

Sean Finn’s death was a stunning blow to his comrades, and his native county and it brought waves of sorrow into the homes of Limerick. Thousands of people from near and far attended his funeral a few days later. He was buried in Rathkeale Cemetery amidst tight security as the troops patrolled the streets armed to the teeth, in a show of armed arrogance meant to intimidate all those attending the funeral.

Following the Truce, a Sinn Fein Memorial Committee was formed to erect a suitable memorial cross to his memory. It was unveiled on March 30, 1924 to mark the third anniversary of his death, and thousands of people attended including Volunteers who served under him, and also members of his old column. The Rathkeale Brass Band headed the march to the cemetery playing the Dead March. The slow and measured steps of the marchers was most touching and impressive.

Sean Brouder Chairman of the Newcastle West Town Commissioners oversaw the proceedings, and Countess Markievicz TD spoke. A letter was read from Sean T O’Kelly TD, regretting his absence due to an engagement in London. At the conclusion of the proceedings, The Soldiers Song was sung by Mr O’ Leary, with all present joining in. A very impressive Celtic cross marks his final resting place, with the following inscription:

Erected to the memory of Brigadier Commandant

On March 30, 1924 Sean Finn was also remembered in Ballyhahill on the spot where he fell.

David O’Connor recited the Rosary with all present responding with emotion and deep respect. A cross was also erected at Ballaroe to mark the spot where Sean Finn was shot, and a commemoration was held there on April 18, 1971, to mark the 50 anniversary of his death.

A further commemoration was held there on April 2, 2000 on the occasion of the unveiling of a cross to Sean Finn.

The address was delivered by the late historian Mainchin Seoighe, from Tankardstown, Kilmallock, and a large crowd attended. The Finn family played an active role after the formation of the state with his brother Tom sister Mary and nephew Sean Hayes, serving as members of Limerick County Council.

A number of verses have been composed over the years about Sean Finn which does justice to his memory. I have in my possession two different ones, but only the author of one. The final verse of A Poem on Sean Finn, concludes as follows:

There is one more I want to state, before I drop my pen

But in blessed clay he lied today in his native place Rathkeale.

Ballaroe was composed by the late John Hayes, and it is sung to the Air of Who fears to speak of Easter Week. The second last verse goes as follows:

The cuckoo and the corncrake will be there at eventide

His memory shall ever be revered around that spot called Ballaroe.

The Rathkeale GAA Club called its football team Sean Finns, and their hurling team St Mary’s until lately changing to Rathkeale. The Limerick Council Office in Rathkeale was named after him in 2007, and I can recall seeing his portrait hanging in the Office of Limerick County Council.

Sean Finn was politically active in the 1918 General Election, and he campaigned for the Sinn Féin candidate, against John Redmond in Waterford. His intervention at a critical stage in 1920 saved the Limerick Co-operative Agricultural industry from internal collapse. Sean played a major role in the formation of the Sinn Féin police, and the Sinn Féin Courts in West Limerick.

Dan Breen writing in his book My Fight for Irish Freedom mentioned meeting Sean Finn. He declared him one of those heroes who were proud to die for the freedom of their beloved country.

Now 100 years on the knowledge of his great deeds, and fight for Irish freedom must never be forgotten. May his brave soul and the souls of all his comrades’ rest in Peace. It was a nice touch by Limerick GAA, and others who participated in the ceremony in Rathkeale Cemetery, and at the Sean Finn Monument on the lands of Terence Mc Sweeney at Ballaroe.

Wreaths were laid to remember and honour a brave Irishman who fell in defence of his country one hundred years ago.