Then & Now: Limerick’s own five-in-a-row 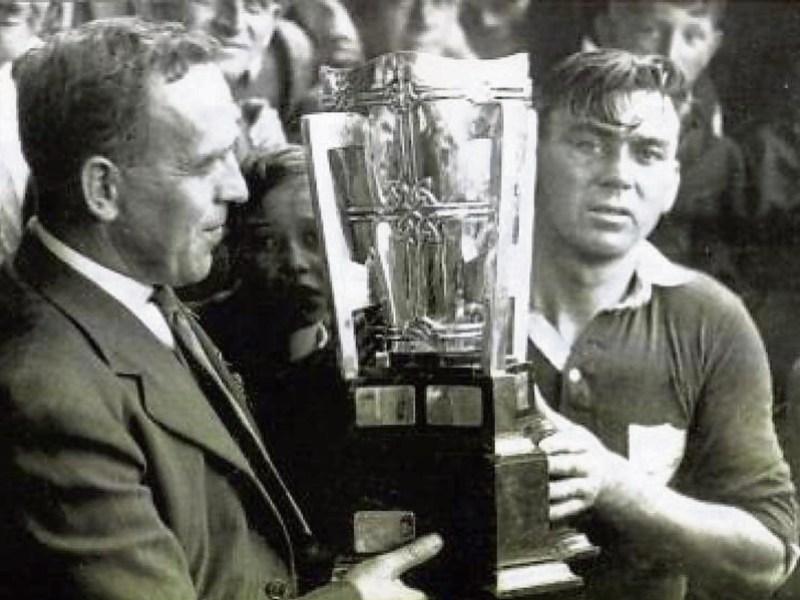 Success breeds success: The famous photo of Mick Mackey with the Liam MacCarthy Cup in 1940

IT WAS all about the five in a row in Gaelic games in recent weeks, with Dublin footballers achieving this feat in the All-Ireland senior football championship. Kerry minor footballers had achieved their own five in a row the previous year, to hold some bragging rights of their own.

We cast our minds back to another five in a row which is little spoken about at present. It concerns Limerick's golden era of hurling which saw them win five National League titles in a row from 1933 to 1938. This achievement established a record that, up to the present time, has never been equalled.

The National Leagues in both hurling and football were introduced following the Annual Congress of the Gaelic Athletic Association held on Easter Sunday, April 12, 1925. A little over one hundred delegates were in attendance, and they met in a room under the recently erected Hogan Stand at Croke Park. The proposal was debated at length and the matter was discussed from many angles, before a decision was reached, with the recommendation of a secondary competition for the weaker hurling counties.

Twelve teams entered the first National Hurling League and Limerick participated in the premier competition along with Cork, Tipperary, Kilkenny, Dublin, Galway, and Laois. In the opening round Limerick played Dublin at Croke Park on October 4, 1925. Dublin were the All- Ireland champions at the time, and after a terrific game they won by 6-1 to 4-4. Limerick qualified for their first National Hurling League final against Kilkenny at Nowlan Park on April 9, 1933. The loss through injury of Mickey Cross early in the match was a massive blow and Kilkenny won by 3-8 to 1-3. Limerick also lost to Kilkenny in the All-Ireland Final, that September, but they were a coming team of raw talent.

Limerick dominated the 1930s by the sheer strength and magnetism of their hurling play and hurling men. They played a delightful brand of hurling that captured the public imagination and brought the crowds flocking to see them play. The Limerick team of that era had a glamour that enthralled the crowd, and above all, they had a flair for the big occasion. Little wonder then that the team was in such demand, particularly for church building tournaments. Jackie Power used say to Mick Mackey, “There must be a place in heaven for us Mick, we have helped build so many churches.”

In the period from October 15, 1933 to April 24, 1938 Limerick played 65 games in Ireland, England, and America. They won 58 of them, drew four, and lost only three. It was a performance in consistency that had greatness written all over it. It was the Mackey era, and Mick - the darling of the crowd - stamped his personality and hurling brilliance permanently on it. Limerick won four Munster titles in a row: 1933-1936, inclusive. In those years they contested all four All-Ireland finals winning two of them and losing to Kilkenny in the other two.

In the years 1934-1938, inclusive, four of the five Railway Cup competitions were won by Munster teams that were dominated by Limerick men. In the 1936 competition, with Mick Mackey as captain, eleven Limerick men wore the Munster jersey. Limerick finished the 1930s with a smashing victory over All-Ireland champions Kilkenny, in the first Oireachtas Tournament. It was played at Croke Park in the late autumn and the final score was Limerick 4-4 Kilkenny 2-5. The following is a brief recall of the five in a row National Hurling League titles

Limerick qualified for the final of the 1933-34 National League after victories over Tipperary, Offaly, Galway, and Clare. Dublin hurlers were a formidable force throughout much of the 1930s and they progressed to meet them. The final was played at the Gaelic Grounds, on March 25, 1934, and 10,000 people were in attendance, with gate receipts of £ 435. Mick Kennedy a Tipperary man from the Rag near Thurles town was the Limerick captain, and they won a mighty contest by 3-6 to 3-3. The star of the thirty players was John Mackey at wing forward regarded as the greatest of his era in that position. Limerick might well have lost without his contribution, and brilliance.

Limerick played eight games in the following year's campaign resulting in a clean sheet apart from a draw with Cork in Croom and victories over Clare, Waterford, Tipperary, Galway, and Dublin, in all their other games.

The match against Kilkenny, which was played in Nowlan Park, was talked about for many a day afterwards, as it turned out to be one of the classics of hurling. It contained plenty of crisp ground striking and close, manly tackling. It was thrill-a-minute play with Limerick grimly holding on to a two-point lead to win by 1-6 to 1-4. They defeated Laois by 6-6 to 2-2 at Portlaoise, in their final game to retain the Croke Cup, and Timmy Ryan was the captain. Two future great hurlers Jackie Power, and Paddy McMahon, emerged into the limelight during that League campaign.

In the 1935-36 campaign Limerick had victories over Laois, Clare, Waterford, Tipperary, Galway, Kilkenny, and Cork, on their route to the final. Their opponents were Dublin and the match was played at Croke Park. They were captained by Timmy Ryan at centre field, and they won a hard-fought contest by 7-2 to 4-4.

The three in a row was now won, but even better days were still to come.

Limerick suffered their only defeat in five years of league matches in the 1936-37 campaign.

They lost to Tipperary at Thurles by 4-5 to 2-4, playing without Mick Ryan, John Mackey, and Mick Mackey. They got back on the winning trail with victories over Laois, Waterford, Galway, Kilkenny, and Dublin.

They drew with Clare to progress to the final against Cork, which was played at the Gaelic Grounds, on April 18. The final score was a most unusual one with Limerick winning by 11-6 to 5-1.

The following year’s league was played in two sections, and Limerick remained unbeaten. Following hard fought victories over Waterford, Cork, Clare , and Kilkenny, Limerick qualified for the 1937-38 National League final. It was played at Thurles on April 24, against old rivals Tipperary before a record crowd of over 15,000. They had a score to settle, for Tipperary had beaten them in a superb Munster final in 1937. This they did with a convincing 5-2 to 1-1 win. Peter Cregan an outstanding minor centre back of 1935 and 1936, established himself on the senior team during this league, and went on to prove himself as one of the great hurling defenders of the following ten years.