Then & Now: Recounting the life of De Valera

Early days in Bruree shaped future president of the Ireland 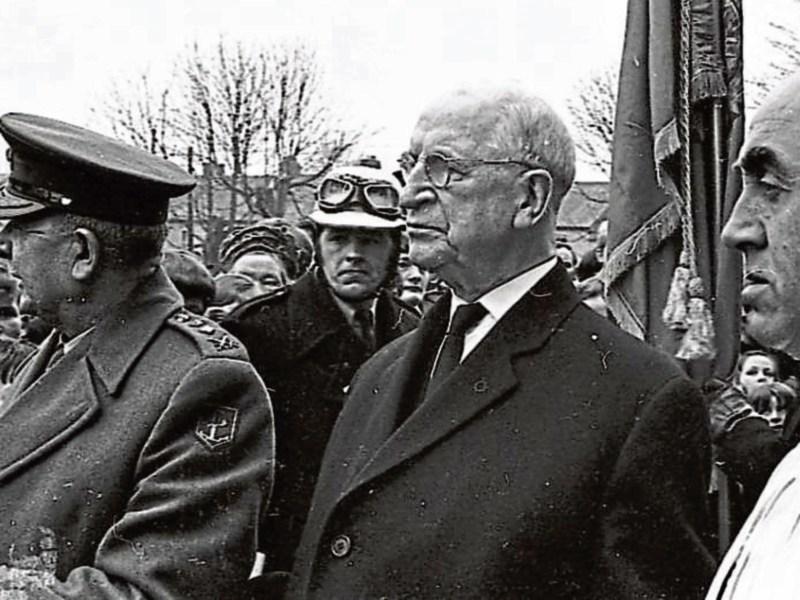 Eamon de Valera at a service in St John's Cathedral, a year before he opened the museum in Bruree

ON THIS day Thursday August 29, 45 years ago the boy from Bruree Eamon De Valera former President of Ireland died aged ninety-two years. He was the man who strode through Irish history shaped the course of the nation and led the march of his people for more than half a century.

He passed away peacefully after a turbulent life of revolutionary drama, which saw him preside at the birth of the nation and guide it through the perils of a world war.

A legend in his own time, he was a great leader as Lenin in Moscow, Ben Gurion in Jerusalem, Nehru in New Delhi, and De Gaulle in Paris. They were his contemporaries and peers and he survived them all. He held the highest offices in the land with a simple dignity and an abiding faith in the destiny of his people that were the hallmarks of his truly Irish character. His political successor Jack Lynch said: "His simplicity became his greatness and his greatness his simplicity."

He was buried at Glasnevin Cemetery after a two-day lying-in state in Dublin Castle in the simple brown and white habit of the Carmelites, the honour he cherished most among the many accolades of a lifetime of statesmanship and political power. At the graveside there was a 21-gun salute, and the band played the Last Post and Reveille. The last order of the Chief was that there was to be no funeral oration.

His story begins in the tiny picturesque village of Bruree in 1879 when Ireland was a country in turmoil. A new potato blight was ravishing rural Ireland and the horrors of the great Famine was still fresh in the people's memory. Evictions from the land were common in areas, but the tenant farmers were not accepting their lot. They had organised themselves through the Irish Land League and were fighting back against the Landlords.

As a result of the tense atmosphere tens of thousands of young Irish people came to accept immigration as their only option. Rural communities were being decimated like the last recession, as the young and ambitious began to leave. A young Kate Coll (twenty-three years) in Bruree was busily getting ready for her voyage across the Atlantic. The curse of immigration was tragic for her family as they gathered with friends to bid her goodbye. It was the first step in a saga that would have a deep effect on the shaping of Ireland for the greater part of the next century.

Within a year of arriving in New York Kate who worked as a domestic in a high society home met a young music teacher. He was a Spaniard immigrant named Vivion Juan De Valera, and they married in 1881, and just over a year later their son was born in a city hospital on Lexington Avenue off 51 Street. The child was registered as George, but he was christened Edward. Less than three years later Kate's husband Vivion died of tuberculosis.

Kate a young widow had to return to work and so she decided reluctantly to send her son back to the family home in Bruree with his uncle. The boy who would fashion the future of Ireland to be brought up in a farmer’s cottage situated on the side of the road about one and a half miles from Bruree. The cottage remains intact to this day and is open to the general public by appointment. He was brought up as a semi orphan by his grandmother Elizabeth Coll, his uncle Pat and aunt Hannie.

At his grandmother's knee he heard stories of the Young Irelander's, O'Donovan Rossa, and the Fenians, Michael Davitt and the Land League, and the seeds of patriotism were being sown. He attended Bruree National School where he was called Eddie Coll. He became familiar with a countryside still ravaged from the great hunger of the forties, that forced his mother to board the emigrant ship. He was only nine years old when the uncrowned king Charles Stuart Parnell died leaving a vacant throne.

Eddie missed days from Bruree school having to do various chores around the farm, and later having to walk seven miles to the CBS School in Charleville. His flair for mathematics was noticeable from an early age, and in 1898 he left his childhood home on a £20 scholarship to Blackrock College in Dublin. His ambition (a predictable one for a young man of the time) to be a schoolteacher or priest. Tall for his age he was a good athlete and a very fast miler. He was good enough at rugby to be once given a Munster trial. But sport was too light-hearted for his serious mind to become an obsession.

With the turn of the century the Gaelic renaissance was flowering, and Yeats, Synge, Lady Gregory, George Russell, and James Stephens were tracing the Irish soul. It was a time of change, and Eamon was greatly influenced by the Nationalist fervour that was sweeping the country. As a member of St Vincent De Paul he saw firsthand the horrendous conditions endured by Dublin's working class. In 1908 he joined the Irish Language Movement (The Gaelic League) and it was through the organisation that he met his future wife Sinéad Ní Fhlannagáin, who he married in 1910.

Eamon, along with hundreds of others enlisted in the Irish volunteers, at their inaugural meeting which was held in the Rotunda in 1913.

As a volunteer he participated in one of the most celebrated incidents of this period-The Howth gunrunning episode. He rapidly rose through the ranks of the Volunteers to command the Dublin Brigade 3rd Battalion. He was unknown outside volunteer circles in Dublin, but this was soon to change.

His role in the 1916 Rising would catapult him from obscurity to national hero.

In the Easter Rising his 3rd Battalion was charged with defending the South Eastern approaches to the City so as to prevent British re-enforcements from pouring into the City. Considering the size of the area he had to cover this was a near impossible task, with only 130 men. What they lacked in manpower and resources they made up for with an abundance of courage and resourcefulness. This position saw some of the fiercest fighting on Easter Week. From vantage points along the Grand Canal in the Ringsend and Ballsbridge areas, they wrecked havoc on the Crown forces.

The defence of Mount Street Bridge would go into Irish battle lore, as a party of 13 Volunteers faced a one thousand strong force of British soldiers. Time and time again the British tried to storm this position only to be driven back with heavy casualties. When news of the surrender reached him, he at first refused to believe it fearing that it may be a trick. When finally, the 3rd Battalion surrendered Eamon De Valera was written into the history books as the last Commandant of the Easter Rising to surrender.

When defiantly he marched his men out behind the white flag , only four of his Volunteers were missing after being killed in action. The British in dead and wounded had lost 234 men to the Third Battalion, or about a half of their total casualties in the Rising. He was arrested and sentenced to death, but his American citizenship came to his rescue, after the intervention of the United States consul in Dublin, and life imprisonment the result. We will continue his story in next week's column.