Then & Now: The Dubliners connection to West Limerick 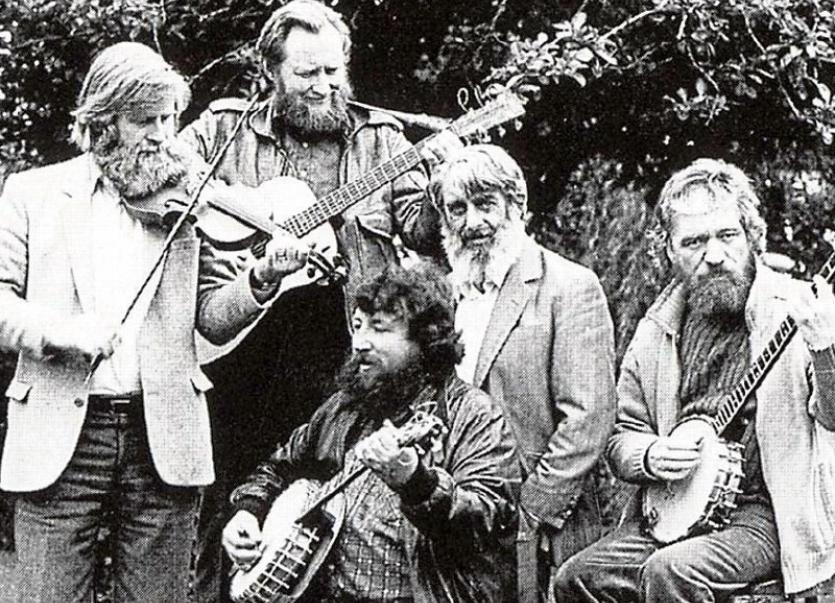 John Sheahan, far left, with his Dubliners bandmates pictured in the early 80s

JOHN SHEAHAN one of Ireland's foremost entertainers celebrated his 80th birthday on Sunday last May 19.

Growing up in the sixties we became aware of the Dubliners folk group who were one of the leading groups of the time. We listened to them on the radio, and watched them on television, and we got to know the songs they sang ‘’Dirty Old Town’’ ‘Seven Drunken Nights’ ‘Raglan Road’ and numerous others.

The Clancy Brothers and Tommy Makem, The Johnstons, and The Ludlows, were other popular groups at the time.

In the heyday of the festivals and carnivals around the country the Dubliners were one of the major attractions on opening or closing night. The group performed in many locations including Ardagh, and Carrigkerry Carnivals packing out the large open-air marquees.

We got to know the group members names, and snippets of information about them in the papers and music magazines of the time. We identified more with John Sheahan, when we heard about his West Limerick connections in Ardagh and Glin.

My uncle Johnny Aherne, and my neighbours Joe Mangan, John O’Connor, and Mike Murphy were members of the Glenside Céilí Band. The band was founded by Mick and Madge Mullins, Glenville, in the mid fifties, and it also included Tom and John Mullins also from Ardagh. John Sheahan would spend his summer school holidays at his mother’s house Drew’s in Ardagh.

He would join up with the members of the group for the six weeks of his holidays as they performed in the venues around West Limerick.

He also attended Ardagh NS under Master Johnny Danaher for a year during the 1940s. This was due to a teacher’s strike in Dublin at the time. He kept up the relationship with the members down the years, calling to visit them when the Dubliners were performing in the area.

He also attended many of their funerals when time allowed and joined in the farewell sessions afterwards. John and his daughter Ceoladh participated in the funeral Mass for the late Peggy Drew in 2005; they played some lovely tunes on their violins during the ceremony held in Saint Molua’s Church in Ardagh.

John was born on May 19, 1939, in Dublin to Patrick Sheahan from Glin and Mary Drew from Ardagh. Mary was the daughter of Denis Drew, and Mary Windle, and she went to Ardagh School.

She was sister of the late Jimmy Drew and Ellen, who married Edmund Hanrahan, in Ballyguiltenane. Patrick and Mary had five in their family who are all still alive and living in Dublin.

Denis, Anne Poleon, Mary Kavanagh, John and Patricia Healy. John’s father was a member of the Gardai Siochana and he was based in Dublin. John is the grand nephew of Patrick Sheahan, a Royal Irish Constable, who in 1905 died trying to save the life of a pipe workman who was overcome by toxic exhalations in a sewer on Hawkins Street, Dublin where a memorial statue stands at present.

John attended the local Christian Brothers School in Marino, and with encouragement from one of the teachers he became a member of the music class.

A school photograph of the time from 1951 showed John, Paddy Moloney (Chieftains) and Leon and Liam Rowsome, sons of piper Leo were all members of this class.

He played the tin whistle, and later the fiddle which he found around the house. His parents sent him to the Municipal School of music in Dublin where he studied classic violin for five years. He joined the ESB after Technical School where he trained to be an electrician, and a draughtsman.

John played with a few bands around the country until he met the members of the Dubliners group in the early 1960s. John and Bobby Lynch would perform together during the interval of concerts and sessions featuring the Dubliners.

They both joined Ronnie Drew, Barney McKenna, Ciarán Bourke, and Luke Kelly in 1964. Luke left for a year and when he returned Bobby left and John remained as a member for the next 48 years.

He has worked with numerous artists and groups in venues all over the world and guested on several albums and picked up awards along the way.

He has been a frequent guest on radio and television programmes, including last Friday’s Late Late Show. He was the only member of the group to have had a formal musical education and he is the last surviving member of The Dubliners, whose name is now retired since the death of Barney Mc Kenna in the autumn of 2012.

The other members continue touring under the name of ‘’The Dublin Legends’’. Harriet Roche from Newcastle West is another Dubliner’s link with West Limerick. She has worked in their office for many years looking after the group’s affairs.

John married Mary Morgan from Ballybay, County Monaghan, on April 8, 1967. They have four children Siobhan, Fiacre, Eoin and Ceoladh. The family moved to the country from Raheny to Mulhuddart to live in 1976.

John was teetotal until Barney Mc Kenna persuaded him to drink a glass of champagne to mark his tenth wedding anniversary on Good Friday 1977. His father Patrick died in 1975 and his mother Mary in 1995 and they are both buried in Dublin. John’s hobbies include tinkering with cars, home improvement and decoration, gardening and composing poetry and cookery in recent years. John also bakes his own bread and I include the following short poem he wrote about bread in January 2001.

Wheat that danced and ripened in the summer sunshine,

Milk from cows that grazed on peaceful pastures,

Yielding to the oven’s secret alchemy,

A transformation - a miracle in the making,

The bread of life.

He admires the music of the Beatles and the skill of Louis Armstrong, He likes American bluegrass fiddle music and he has a deep respect for the artistry of Sean Maguire, the late and renowned traditional fiddle player. We all recall his composition the Marino Waltz which was a big chart hit in the early 1980s. This tune was used to promote Born Na Mona peat briquettes on a long running advert on RTE. John composed and recorded an album of original instrumental pieces with classical guitarist Michael Howard. The album ‘’In Our Own Time’’ was released in 1987. Another album of his own compositions titled ‘’The Marino Suite’’ was released in 2008. It features the Young European Strings Chamber Orchestra as support to his fiddle playing.

RTE showed a documentary about John Sheahan, now retired member of the Dubliners folk group on Monday April 15, 2013. It was most interesting viewing for all but especially viewers from the West Limerick area that John is associated with. He is the last surviving member of the original five-man group that took Ireland and the world by storm during their heyday. John came across as a very down to earth person who embraced fame lightly after 55 very successful years in the music industry. John still visits his relations in West Limerick which are getting fewer with the passing years. He visits his cousins in the Glin area, Denis Hanrahan and family, Catherine Stackpoole and family, John Healy (Glin Comhaltas) and other members of the Healy family. Eileen Courtney the Liston’s and Nolan’s in Knocknaboola, and the Sheahan family (shop) in Glin, and other relations and friends.

West Limerick people can be very proud of John Sheahan, whose contribution to the Irish music industry has been immense. We look forward to more contributions be they music or poetry from him in the future. He is a living legend who has brought great fame to his country and not forgetting his West Limerick connections.