Daughters of Charity and Limerick Youth Theatre put on play 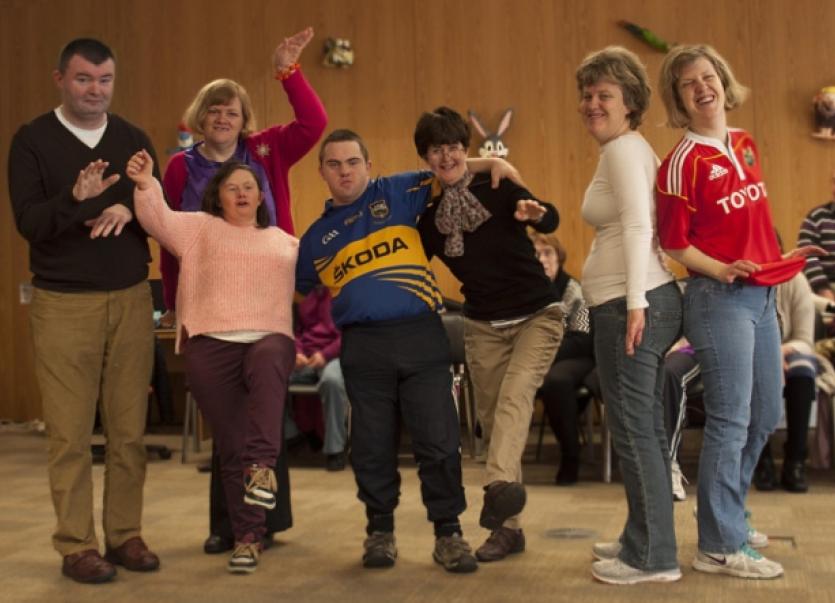 LET’S take five,” shouts Myles Breen – writer and director of Around the World in 80 Minutes.

LET’S take five,” shouts Myles Breen – writer and director of Around the World in 80 Minutes.

The cast troop out of the rehearsal room – all smiles, chatter and laughter. It is a scene like any other in the acting world, which is exactly what the participants want. This is the fifth year of a collaboration between service users of the Daughters of Charity from across Limerick city, county and Munster, and Limerick Youth Theatre.

What began as a small cast has grown to over 160 – over half from the Daughters. The Laurel Hill Colaiste FCJ choir return again and this year Music Generation Limerick City have come on board too. Two performances of Around the World in 80 Minutes take place in the Lime Tree Theatre on Monday and Tuesday, March 30 and 31 at 8pm.

The Leader paid a visit to the ground floor of the Dominican Biblical Centre on Saturday morning and it was a hive of activity.

Donal Sherlock, a manger with the Daughters, said he and Angie Smalis, of Limerick Youth Theatre, joined together over five years with the common goal of using art as a medium for social inclusion

“We wanted to create an environment for people in their local community, whether they had or didn’t have a disability, to work together and put on a show. It has been a wonderful experience and journey,” said Donal.

In 2000, 40 men and women from Daughters of Charity took part. Next Monday and Tuesday there will be over 80, between acting, singing, dancing and backstage. Auditions commenced in December facilitated by Myles Breen.

“They have to sign a contract to say they commit to three months rehearsals. On Saturdays, we have dance, acting and music rehearsals. There are extra dance classes on Wednesday. On Thursdays, they go to Laurel Hill Colaiste FCJ during the girls lunch-break for choir practice.

“The school’s core values of openness, friendship and excellence tie into ours. We have seen huge bonding between our service users and the girls in Laurel Hill and Limerick Youth Theatre members.

“It gives them an opportunity to interact with those who have intellectual disabilities and see the abilities they have.

“We have noticed that many have gone off to study nursing, psychology, medicine etc,” said Donal, who adds that the project is inkeeping with the HSE’s New Directions report.

Every year the performance gets better and better, as well as the service users own confidence.

“We have service users who would have been in year one that have progressed and are now the star performers in the show. Their posture, speech, sense of self awareness and, most importantly of all, their self-esteem has improved.

“They are now able to take on the limelight whereas they would have been nervous before. They are starting to network back in to the community and what we have found is a lot of people are going to the show because they know them from the shop, pub or using other amenities. It’s all about social inclusion.

“The level has gone up and up. The expectation from the service users has gone up as they expect to do well,” said Donal.

Niall Flanagan, from Caherdavin, and Eileen Gleeson, Annacotty, feature in the play.

It is Eileen’s first year, while Niall is an old hand.

“This is my fifth year being involved,” said Niall, who plays Jason Donovan and Kurt Von Trapp from The Sound of Music.

“I love the rehearsals and getting on stage,” he says.

Does he feel nervous performing in front of over 500 patrons, the Leader asks.

“It doesn’t bother me. I am much more confident since I started acting,” said Niall, also a talented artist.

Eileen is a newcomer and has taken to it like a duck to water.

“I’m delighted to be part of it. I’ve really enjoyed the rehearsals. We get in a big circle and dance together. I can’t wait until the shows. I’m going to do it next year as well,” said Eileen. Her message to the public is, “Come out and see what we can do”.

Myles has been involved in more plays than most of us had hot dinners but you can tell this collaboration is close to his heart.

“The atmosphere in the audience is incredible. It is a fun night out for all the family and is full of laughs. Everybody works together, helps each other and everyone is given their chance to shine,” said Myles, who likens the play to The Hunger Games meeting Jules Verne.

“Three teams compete to be around the world champions. They go to different countries and they have challenges in each one.

“When they go to England they have to steal Queen Elizabeth’s crown. In Scotland they have to find their favourite dish – deep fried, battered Mars bar. It’s a comedy, we have a talking Mexican jalapeño pepper! There is even an appearance by Tom Cruise. As well as the drama we have the fabulous choir from Laurel Hill Colaiste, Music Generation and Angie Smalis working with the dancers.

“It demonstrates the power of working with each other – there is discipline, time-keeping, line learning, projection. So for any actor you have to call on a whole range of different skills but at the core of it is the joy of telling a story, being on stage and sharing it with an audience,” said Myles.

Angie Smalis, of Limerick Youth Theatre, said they provide a two-year course that gives the 16 to 23-year-olds experience in performing arts and theatre making.

“We started five years ago with the Daughters and it has worked very well. We’ve gotten a very good response from the audience. It is fun and very nice to watch, but also our members came together as a group and became more aware of people with intellectual disabilities. The feedback we got is that they would like to continue working with this group. It gets bigger and bigger every year and we are engaging with more and more organisations and groups,” said Angie.

Just to prove how popular the connection between the Daughters and Limerick Youth Theatre has become some who have finished the two year course return to help backstage. “The fact they come back and take on these roles says it all,” said Angie.

It is the third year of involvement for Kerrie Aherne, 18, and Paula Coffey, 19, from Caherdavin.

Kerrie, stage manager, says it is her favourite show of the year.

“They remember you year after year. It’s nice to work with them and meet their parents at the shows. It is heart-warming to know that it means so much,” said Kerrie.

Paula says it gave them new insight into intellectual disability.

“They are quick to learn their lines. They know them all before we do.” said Paula, who adds that the service users constantly surprise.

Continuing that theme, Kerrie says some in the wider public tend to “limit them” but the girls have seen for themselves their talents shining through on stage.

They have witnessed a change in many service users during their involvement.

“Especially in speech and projection. The Lime Tree sits 500, so getting their voices to the back is hard, even for us but they can do it,” said Kerrie.

“Sometimes the day after the play you see them and they might not have a voice. They give it everything,” said Paula.