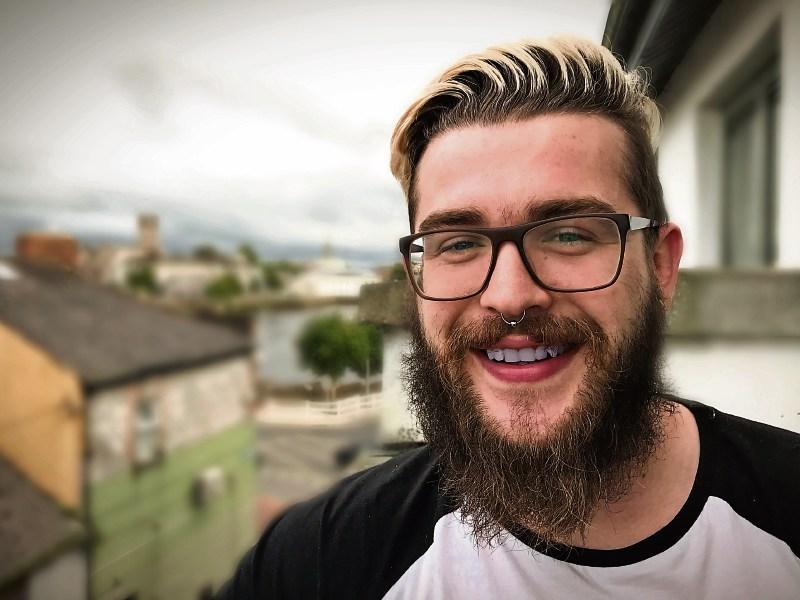 Born in Limerick City, my father, Ian, is from Dublin and my mother, Lizette, is a native of the city.

There were never many artists in my family; however, there are a couple of musicians and designers on my mother’s side. Lizette is a hair dresser and my father works on medical production lines. Throughout my life, invariably, I always had a pencil in hand, and in my early days, was caught numerous times taking a Crayola to the walls of my playroom.

I spent the early years of my childhood living in Caherdavin before moving into what was my great grandmother’s house in Thomondgate.

Today, I live just around the corner, overlooking the castle and Treaty Stone. I went to primary school in Christ the King before going on to Ardscoil Rís, where I would develop my passion for drawing into a love of art as a whole. Not being heavily interested in the academic route, I soon discovered that Art College was the path that I would take, and later applied to study at Limerick School of Art and Design (LSAD).

Although my art began as a child, with pencil and paper, it has taken a number of detours down through the years.

For example, during secondary school, I managed to fall in love with the ball point pen, and haven’t drawn with a pencil since I handed in my portfolio to LSAD. After that came markers, then I began to dabble in spray-paint, with a few murals of mine around town. However, I needed to learn how to photograph them properly, and that is where cameras came in. Since then, I have become obsessed with video, which has taken over how I view the world. Framing, angles, cuts, perspective, and transitions, now command my vision of everyday life.

That said, I am not entirely sure that either of my parents would have predicted they would have a ‘video nerd’ on their hands growing-up.

The vast majority of my family are, in fact, heavily sports oriented with my uncle, Maurice Lawler, playing with Munster Rugby actively in his youth. When they went to watch his games, I would remain in the Shannon Clubhouse with a bottle of orange and a sketchbook. I was, also, constantly drawing on my schoolbooks, or whatever else I could get my hands on, and so got into trouble frequently for distracting my classmates.

With the exception of my parents, my secondary school art teacher, Daniel Harrison, was the greatest influence upon my life choices.

I had always been on the fence about whether or not I wanted to pursue an academic future, and eventually started to realise that it wasn’t necessarily for me. I found myself showing my frustrations through artwork, and I decided to spend all of my free classes, (sometimes not so free), plus the occasional lunch time, in the studio. After that Mr Harrison suggested that Art College might be for me. It was his guidance and advice that led me to apply for LSAD, of which he is an alumnus, and from there to where I am today. Without his aid in the latter years of secondary school, and his support in pursuing creative media, I am not entirely sure where I would be today.

Music has always been a love of mine while driving my work on video.

Some of my earliest memories involve me sitting in the back seat of my dad’s car listening to early Metallica and Iron Maiden albums. In my teenage years it was hip-hop. The passion for music and video went hand-in -hand, and the concept of a music video has always been engrained in my mind. As a result, I decided to create a music video for a song written by one of my best friends, Aoife Roche. The song is a deeply emotional piece, written about the loss of her father, and how she is visited by him in her dreams. I wanted to try and capture those feelings that she felt, while re-imaging the dreamscape in which she dwells at such moments.

With video media you can say so much in so little time, and as a result, it is now taking over the social media world.

Information that would take five minutes to read can now be encapsulated in a 20 second video, reaching more people at an exponentially higher rate. The visual aspect brings a range of emotions to the table without a person having to interact with it at all. Additionally, with the animation aspect, you have no physical boundary. You can create absolutely anything that you dream about, with the only thing holding you back being your imagination. Inspired by the likes of Richard Mosse and Jack Seikaly, I recently began experimenting with infrared photography. Infrared video, however, is very difficult to create without expensive cameras, and even more expensive film. I had to create a process, therefore, which digitally recreated it. Subsequently, I went on to create record, and album artwork for the track, which was displayed alongside my video work in the LSAD Graduate Degree Show (Be.Cause).

Art provides a massive outlet for me today, being someone who struggles quite a bit with their mental health.

For example, it allows me to put a lot of my struggle down on paper, or on screen, which is a huge help. The obvious drawback, though, is when you are paid to produce work for someone else. Here, your demand is dependent upon when they want something done. So, income from art can be sporadic. Ideally, I would like to reach a point where I am creating video material, hopefully for the music industry, on a more regular basis!