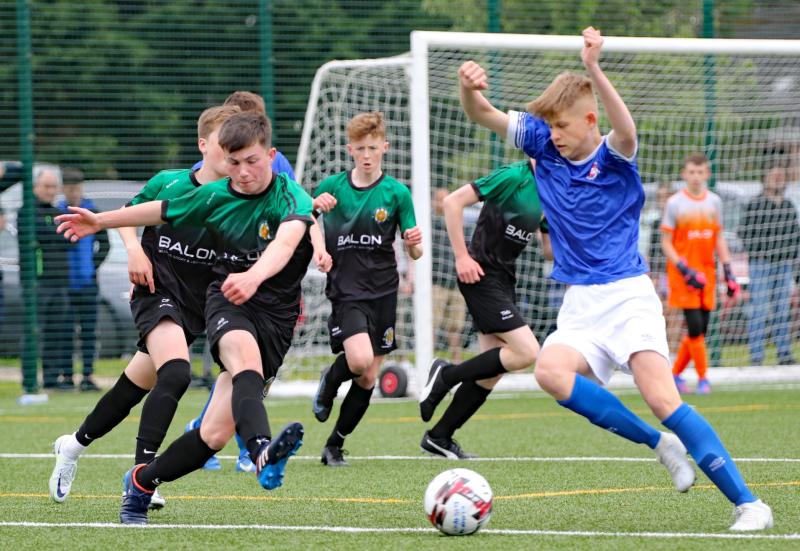 Limerick County's Ben Gubbins is closed down by Daniel Zwiegela, of Limerick District, in their SFAI Kennedy Cup fixture at UL this week Picture: Brendan Gleeson

The three Limerick sides, Limerick County, Limerick District and Limerick Desmond Schoolboy Leagues all missed out on a place in the quarter-finals of the Kennedy Cup proper.

Limerick County were pipped for top spot in Group 8, finishing second in the pool, one point behind group winners Sligo/Leitrim.

Limerick County played out a 3-3 draw in their final group game against the NECSL. After falling 1-0 in arrears early on, County equalised through Cian McNamara, of Herbertstown AFC. A second goal from McNamara had County 2-1 to the good and the Limerick side also led 3-2 before conceding an equaliser which denied them claiming the win.

In Pictures: Big crowds follow the three Limerick teams as the Kennedy Cup kicks-off in UL

Limerick County will now face South Belfast in their Bowl quarter-final at 3pm this Wednesday at UL.

Limerick District finished in third place in Group after suffering a 1-0 defeat to Sligo/Leitrim in their final group game played in front of a large attendance on Tuesday evening.

After their opening night draw with Limerick County, the District side had scored a 1-0 win over NECSL earlier on Tuesday, thanks to a goal from Eamon Doyle of Fairview Rangers.

Limerick District will now face South Tippeary in the Shield quarter-finals at 1pm this Wednesday at UL.

Meanwhile, Limerick Desmond finished in their spot in Group 5 after losing 2-1 to table toppers Cork in their final group fixture.

After falling 1-0 in arrears, Desmond hit back with a goal from Max White, of Breska Rovers, to draw level. However, Mallow's Colin Healy popped up with a winner for Cork.

Earlier in the day, Limerick Desmond had defeated the Cavan/Monaghan League 5-2 in their second group game of this year's Kennedy Cup. Desmond stunned their opponents with three goals in five minutes from Darragh Taylor, of Breska Rovers, Sean Downes, of AK United from the penalty spot and Daven Healy, Abbeyfeale United.

Desmond then added a fourth goal from Darragh Mullane, GB Rovers, while Healy then added his second and the Limerick side's fifth goal to seal the win.

Desmond will take on Dundalk in their Shield quarter-final at 1pm today, Wednesday.