Carew Park spot on to claim Premier 'A' Healy-Webb Cup 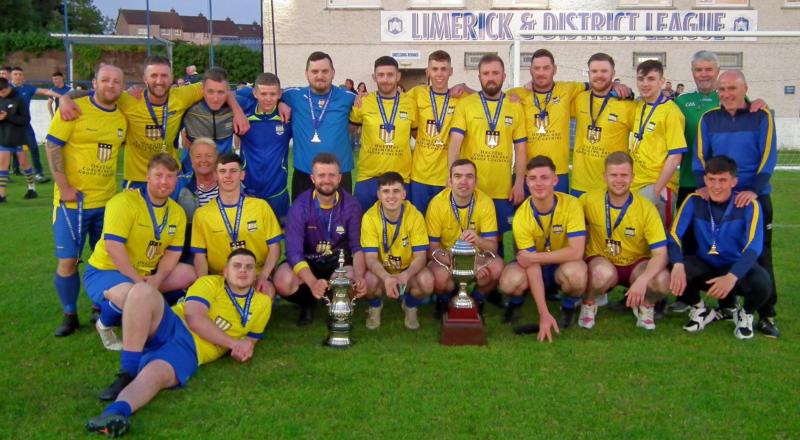 THE inaugural Premier A Cup had a fitting contest for the magnificent Healy-Webb trophy on offer when Carew Park and Charleville battled it out to a standstill before the city side won out after a penalty shoot-out.

It completes a superb league and cup double for Albert Slattery’s men to top off a memorable season.

The game kept the large attendance hooked to the final whistle as both teams ran themselves into the ground and cramp played a starring role in extra time. As the cliché goes, it’s a pity we had to have a loser but such is cup football.

The Cork side were out of the traps much quicker and caught Carew Park flat footed as they raced into a two-goal lead through Eoin Clifford and Donal O'Connell.

Carew were shell shocked and struggled to get their game going against a lively opposition.

All changed however when veteran striker Jonathan Grant was introduced to the fray in the second half. He was fouled to present Gary Griffin with the opportunity to reduce the deficit from the penalty spot and with the end line coming into sight he created the equaliser for Mark McGrath. Fittingly, he also scored the decisive penalty kick to win the tie.

Charleville had to field without a number of key players but from the kick off they put Carew on the back foot.

Donal O’Connell headed inches over the top before Eoin Clifford cut in from the right and fired home from an acute angle with less than five minutes played.

Before Carew had time to regroup, they were two down.  A good run by the excellent Gary Ward saw him slip the ball through for Eoin Clifford to fire home.

Carew were rattled and would have conceded a third but for a superb save by Evan Moloney to deny Cian McNamara from ten yards.

Carew’s first effort of note was a snap shot by Pat Boyle ten minutes before the break followed minutes later by a shot from Mark McGrath, both too high of the target.

The second half saw Grant enter the fray and immediately he set up a chance for McGrath, brilliantly blocked by Ciaran Carey.
Ten minutes later Jamie O’Sullivan crossed from the left and Grants attempts to head goalward were thwarted by a high boot and a penalty kick followed. Gary Griffin continued his rich vein of form from the spot to reduce the deficit.

With just minute to play Grant and O’Sullivan worked the ball down the left before the latter teed up Mark McGrath to fire in from inside the box to send the game to extra time.

No further goals were forthcoming as two tired sides were feeling the pain and penalties were needed. Evan Moloney saved three for Carew Park and Grant did the rest.