Limerick's Scoil Mhuire agus Íde created history when, for the first time, they won the Senior Ladies Football Division 1 Munster Final. The win came over Regina Mundi College, from Cork, with the Newcastle West side winning on a scoreline of 5-15 to 5-5. Full report from Johnny Walsh below - For more pictures, click next 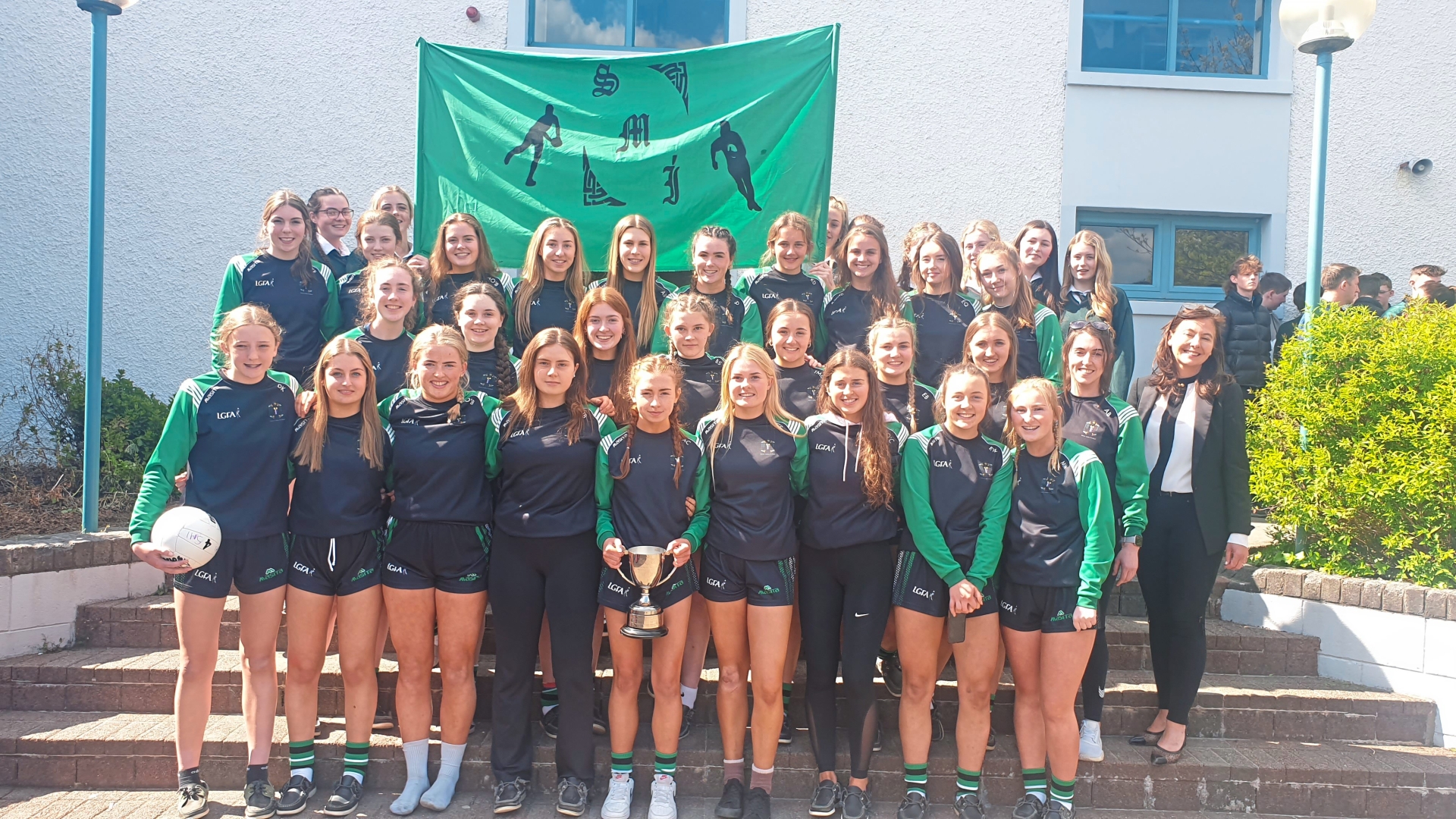 Veni, Vidi, Vici could well be the victorious slogan of the ladies of Scoil Mhuire agus Íde, Newcastlewest on Thursday afternoon as they created history in the Mallow GAA Sports Complex when they won the Munster Ladies Post Primary Senior Cup Final against Regina Mundi College of Cork.

The happy beaming smiling face of Amy Breen epitomised the joy of the occasion as she predicted before the match that her team could win by more than seven points. Due to the Covid Pandemic the final was not played for the past two years with Coláiste Mhuire Ennis being the previous winners in 2019.

An electric atmosphere permeated the grounds with the temperature reaching 17 degrees centigrade as both sides of supporters intermingled in the stand. As the original rounds were played on four quarters, the same procedure applied to the final.

The opening minutes were tense and exciting with both sides wide of the target. Eabha Curran broke the deadlock in the 5th minute when she rifled over the opening point following good work from Jessica Murphy. Ellie Woulfe combined with team captain Amy Curtin for her side’s opening goal a minute later before Regina Mundi restored their point advantage following a gem of a goal from Eabha O’Neill. A probing lobbing ball from Sofia Daly dipped into the top of the net to give her side a four point advantage as Regina Mundi looked like potential winners. Finding a new lease of life and a revigorated self-belief Scoil Mhuire agus Íde dominated the remainder of the opening quarter as they kept their vaunted opponents scoreless and added on an unanswered  goal and six points.

A point by Caoimhe Smith began the renaissance before Lucy O’Brien added another two to cut the deficit to a solitary point. A foul on the highly talented Amy Curtin resulted in a penalty which was taken by the same player and brilliantly saved by custodian Olivia Long with the vigilant Amy Curtin flicking the rebounding ball to the net. Scoil Mhuire agus Íde continued to dominate with Ellie Woulfe, Caoimhe Smith and Lucy O’Brien shooting a hat-trick of points to leave their side leading by 2-6 to 2-1 for Regina Mundi at the end of the opening quarter.

Defences were dominant for the second quarter with scores at a premium in the opening minutes as Ellie Woulfe, Eabha Curran and Ashling Enright traded points. Regina Mundi College rallied back in style to reduce the deficit to a solitary point with a fine goal from Eabha Curran and a brace of points from Eabha O’Neill and Sofia Daly.

Lucy O’Brien scored the final point of the half to leave her team leading by two points at the interval on the score line of Scoil Mhuire agus Íde Newcastlewest 3-9, Regina Mundi College Cork 4-4. The game looked delicately poised with two points separating the sides at the interval.

Scoil Mhuire agus Íde sowed the seeds for victory with a powerful third quarter display with a goal from Ashling Enright giving them a great start. A penalty goal from Olivia Greaney uplifted Regina Mundi’s hopes. Four consecutive points courtesy of Lily Duggan and the highly talented Lucy O’Brien (2) and Ellie Woulfe gave their side a six point advantage before Eabha Curran shot a point for Regina Mundi.

The turning point of the game came in the closing minute of the third quarter following a tremendous forward surge by Lucy O’Brien, a clever delivery to Caoimhe Smith, Ellie Woulfe found the net from close range to give her side an eight point lead entering the closing quarter.

Regina Mundi failed to score in the final quarter with Scoil Mhuire agus Íde rifling over two additional points from Lily Duggan and Ellie Woulfe to get a deserved victory. The vociferous shouts of joy from the Scoil Mhuire agus Íde team and supporters bore ample testimony to a well-deserved victory as referee Denis Motherway sounded the final whistle.

Den O’Mahony on behalf of the Munster Council thanked both sides for a tremendous final. He thanked the referee Denis Motherway, Mallow Sports Complex and both sets of supporters for making it a most memorable occasion before presenting the trophy to a delighted winning captain Amy Curtin. Amy thanked the entire panel and their manager Amy Breen and their loyal supporters. She thanked the referee and Mallow Sports Complex before giving three rousing cheers for Regina Mundi College, Cork.