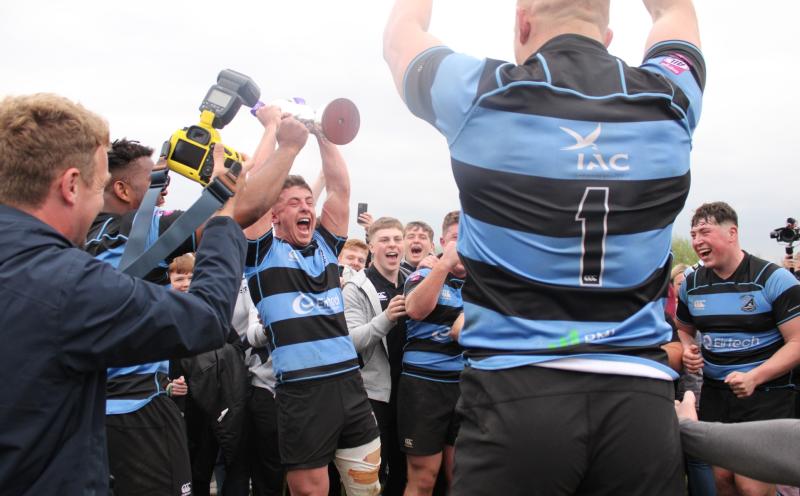 Shannon players celebrate their promotion to Division 1A of the All-Ireland League for next season at Coonagh on Saturday Picture: Sinead Kiely

SHANNON celebrated their return to Division 1A of the All-Ireland League for next season following a deserved 30-15 promotion play-off final win over Naas at Coonagh on Saturday afternoon.

The Parish side can now look back to competing at the top table of the club game for the first time since the 2018/2019 season after which they were relegated to Division 1B.

In-form Shannon made it eight wins on the bounce in the league this season when outscoring Naas by three tries to two in their play-off final which was played in front of a bumper attendance.

The Limerick side, who had beaten Highfield in their play-off semi-final in Cork a week earlier, took control of the game in the opening half after which they held a 17-3 advantage.

An excellent period of sustained pressure, with backs and forwards making ground with a series of strong carries, ultimately led to David Maher reaching out to score Shannon's opening try on 13 minutes.

Another great game in the #EnergiaAIL Play-Offs. @NaasRFC emptied the tank but @Shannon_RFC are back in Division 1A. #PositiveEnergy pic.twitter.com/ubX7jDQ0bD

Out-half Jake Flannery, who is due to move from Munster to Ulster this summer, duly added the extras for a 7-0 lead.

Playmaker Flannery then increased the home side's lead when slotting a penalty goal on the half hour mark for 10-0.

Backed by the breeze, Shannon continued to hold the upperhand in terms of possession and territory and their pressure was rewarded when Flannery intercepted the ball close to half-way in the 36th minute, before scampering clear to score the home side's second try.

The out-half also duly added the conversion to increase Shannon's lead to 17-3 at half-time and bring his own personal tally for the game to 12 points.

Naas, who had beaten regular season table toppers Old Wesley in their promotion semi-final, hit back at the start of the second half when replacement Fionn Higgins blocked down a Shannon clearance before gathering possession and scoring for 17-8.

It was then that Shannon showed their admirable composure and mettle. Two penalty goals from Flannery before the hour mark stretched the All-Ireland League's most successful club's advantage out to 15 points at 23-8.

Shannon then made the game safe with eight minutes remaining on the clock when winger Joshua Costello struck for the game-clinching try in the right corner.

Flannery also added the extras for good measure to bring his points tally for the game to 20.

To their credit, Naas continued to battle and their endeavour was rewarded when Gary Kavanagh grabbed their second try late on, with Osborne adding the extras.

The full-time whistle sounded soon after, sparking scenes of jubilation among the large Shannon support present at the game.

Shannon last secured promotion to Division 1A of the All-Ireland League in 2018 when claiming the Division 1B title – and with it promotion back to the top flight after a five-year gap – after recording a crushing 40-17 win over UCC in April 2018.

Nine-time Ulster Bank League Division 1A winners Shannon had been relegated out of the top flight in 2013 when suffering a 42-0 thumping in a play-off game against UCD in Coonagh.

However, having gained promotion to the top flight in 2018, the Parish side was relegated back to Division 1B the following season.

They will hope their stay in the top flight will be longer this time round. But that's for another day. For now Shannon are celebrating their return to the AILs top division.